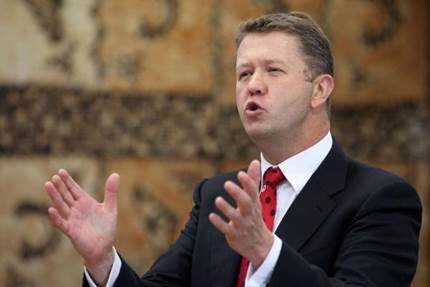 DAVID CUNLIFFE’s biggest problem is his voice. Not his actual voice, which is fine, but his political voice: the way he is heard by the voting public. It’s a problem because the one he’s using at the moment isn’t working. It doesn’t ring true. And until it does he’s not going to be able to engage with the people he needs to make him Prime Minister.

Now, don’t get me wrong. I’m not saying that Cunliffe is a fake. One-on-one, eyeball-to-eyeball, in small groups, he can be utterly transfixing. In the discussions I’ve had recently about the Labour leader’s “voice” problem, this ability to inspire has been attested to over and over again. And I know it’s true because I’ve felt it myself. When Cunliffe fixes his eyes on you and speaks about the things that matter – both to him and to you – he can be utterly compelling.

Unfortunately, all that communicative power and authority is lost whenever Cunliffe is required to address a hostile and/or sceptical audience – most particularly the news media. At these moments he becomes the political equivalent of Iron Man. In the blink of an eye the high-tech suit of armour snaps shut around the vulnerable person inside and his communication, while factual and fluent, loses all colour, all life. It becomes, in a word, robotic.

Consider this example from last week’s headlines. It’s Cunliffe’s response to a reporter’s question concerning the future funding of the Kohanga Reo movement:

REPORTER: Is it the funding structure that needs to change or the entire way the board is run?

REPORTER: So Labour’s not ruling out cutting $92 million of funding as well as the National Trust?

REPORTER: If the funding was cut – what does that mean for Kohanga Reo?

CUNLIFFE: The function is a valid and important one. The way it is delivered is under serious doubt.

Now, bear in mind that this is a discussion about the future of Te Kohanga Reo – a contemporary taonga of Maoridom. So why on earth didn’t the Labour leader (who is presumably very keen to win back the support of Maori voters) say something like this?

REPORTER: So Labour’s not ruling out cutting $92 million of funding as well as the National Trust?

THE IDEAL CUNLIFFE: Good Lord, no! The Kohanga Reo movement is one of the crowning glories of the Maori Renaissance. It plays a vital role in both nurturing and preserving Te Reo. No, no. The movement will continue to receive all the support it needs. The administration of the Kohanga Reo movement, on the other hand. Well, that obviously needs a lot of attention.

I have no reason to doubt that this is exactly how Cunliffe feels about Te Kohanga Reo. That he wasn’t able toexpress his feelings, or give voice to the positive contribution of the Maori language nests as he answered the reporter’s questions goes to the heart of his problem. It explains why he also failed to distinguish clearly the achievements of the movement from the failures of the administration – reverting instead to the bloodless and noncommittal language of administration and management.

Cunliffe has got to let go of his caution and learn to trust his better self – the self that so transfixes, inspires and compels the men and women who work closely with him. If a leader does not believe his true self is good enough for the people whose votes he is seeking then he should stand aside and let someone else have a go.

Having watched him pursue the leadership of the Labour Party with the sort of relentless energy that reassured the rank-and-file that he was a much better person than his enemies said he was, I’m confident that the power to convince New Zealand of the same proposition still lies within.

But, in the end, releasing that power is about Cunliffe believing he is not alone in wanting social justice and equality. That these are, in fact, the aspirations of hundreds of thousands of his fellow New Zealanders – who are longing for someone to put the inchoate promptings of their hearts into words and make their dreams real.

The great failing of Cunliffe’s colleagues, and of a press gallery for whom cynicism has become the indispensable armour against the anger and outrage all good journalists should feel, is that they have stopped believing that a better world is even possible. Cunliffe has to steel himself against this corrosive beltway cynicism by constantly reminding himself that politics – especially labour politics – has changed the world for the better before, and can do so again.

Cunliffe must also learn to stop worrying about his caucus colleagues misgivings and pitch his comments over the heads of the media pack to the voters listening beyond. That confidence he feels when surrounded by people who share his values; the confidence that permits him to transfix, inspire and compel; has its source in the deep-seated human need to believe. The moment Cunliffe learns to put his faith in that need – forcing himself to speak to it directly and without equivocation – then his power to transfix, inspire and compel will be immeasurably expanded.

It is said that the those who seek to become great orators, must first find themselves great causes.

In the final analysis, the power of David Cunliffe’s political voice will depend entirely on how widely his vision is shared and how highly his programme is valued.