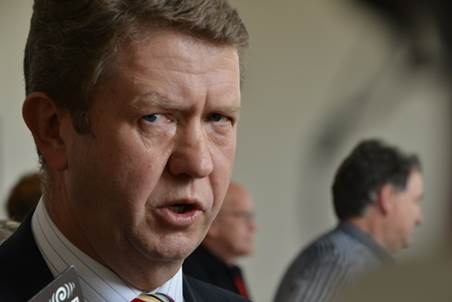 WATCHING SHANE JONES work the room at the New Zealand Initiative Dinner on 13 March was pure poetry-in-motion. To see him duck and weave, lunge and swivel, pump the proffered hands, strike poses for the inevitable selfies, slap the backs and throw a brotherly arm across the shoulders of some of New Zealand’s most powerful CEOs was to witness “old school” politics at its best … and worst.

Jones may have been wearing a crisp white shirt and a tie, but he might just as well have arrived wearing a T-Shirt emblazoned with: “Hi, I’m Shane, Labour’s next Leader – A man you can do business with!”

Also on a roll this past week or so has been Grant Robertson. Not given to ducking and weaving, Grant stands up straight in the House of Representatives and seeks the Speaker’s call as if he’s preparing to tell him a particularly funny joke. Lately, however, Grant’s contributions have been anything but funny – at least not as far as Judith Collins is concerned. John Key hasn’t been laughing much either.

Now Grant isn’t really a T-Shirt kind of guy, but if he was, it would say something like: Hi, I’m Grant, and this is what a real Labour leader looks like.”

Shane Jones and Grant Robertson were, of course, David Cunliffe’s competitors in the three week race for the Labour leadership back in August-September of 2013. They were the losers. Nearly six months on, however, it’s getting harder and harder to think of them as such

Whether it be Shane Jones putting the boot into the supermarket duopoly, or scratching the rough underbelly of Labour’s vote with wicked jibes about screeching Mollyhawks, skinny Australians and other Green objects of derision, or Grant Robertson, slowly and deliberately wiping that infuriating, supercilious and just plain ugly smirk off Judith Collins’ face, it is fair to say that both men have spent the last few weeks doing their utmost to induce, in all those Labour Party members who voted for David Cunliffe, the absolute maximum in buyer’s remorse.

The efforts of Jones and Robertson notwithstanding, Labour’s rank-and-file and its trade union affiliates are probably not (or, at least, not yet) regretting their choice. But they most certainly are asking themselves: “What the hell’s gone wrong with Cunliffe!”

How is it that the Herald-DigiPoll, which showed Labour at 37.7 percent following the Leadership Primary, is now showing the party with a derisory 29.5 percent support? And how in God’s name can their boy be rating lower in the Preferred Prime Minister stakes than the hapless David Shearer?

What the fuck is happening!

What is happening is actually pathetically simple. David Cunliffe: the man with the Harvard MPA; the former star employee of the Boston Consulting Group; the highly competent Labour Cabinet Minister; is determined to take control of New Zealand Incorporated and get it working as efficiently and effectively as possible.

David’s big problem is that no one ever got the dispirited and disillusioned voter off the couch or out of the pub so that he or she could vote for an increase in capitalism’s efficiency and effectiveness!

In the rarefied atmosphere of the offices of Gosplan – the supreme planning agency of the old Soviet Union – the Party apparatchiks’ hearts might have beat faster at the idea of improving the annual efficiency of the Ukrainian grain harvest, or lifting the effectiveness of Baku’s oil drilling rigs. And, who knows, the bright young things out of Harvard Business School and MIT might well react in exactly the same way after pulling off a lucrative merger and acquisition for the Boston Consulting Group. But, the average Russian, the average American – and, yes, the average Kiwi – listens only to WiI-FM. (What’s in it for me?)

Now, New Zealand may not have had any FM radio stations back in 1932, but it had plenty that broadcast using amplitude modulation. One of those was Auckland’s “Friendly Road” station, 1ZR, and its most popular programme was “The Man in the Street” – hosted by “Uncle Scrim” (Colin Scrimgeour).

In his broadcast following the Queen Street Riot of April 1932, during which unemployed workers fought with Police using wooden palings torn from the fence of the Methodist Central Mission, Scrimgeour (a Methodist preacher)  said:

“If what happened last night makes authority act to help desperate people obtain the justice they deserve, the pickets torn off the fence of the Methodist Mission in Airedale Street will have caused the church to give to the people the most outstanding service of the church’s hundred years of history.”

What was in it for the people who voted Labour in 1935?

The justice they deserved.

Are you listening, David? Do you get it, David? Just how much more plainly would you like us to say it, David?

What do people want? They want Jobs. Higher wages. A warm, safe home to live in. Affordable rent and a secure tenancy. Cheap power. Protection from those bastards at WINZ, CYFS and the ACC. Unions that people can join without fear of losing their jobs. Free doctors’ visits. Free dental care. Schools that give their kids the very best start in life. The right to hunt and fish and swim in the mountains, lakes and rivers of their own country without running into “Private Property – Keep Out” signs and without getting sick. An end to the selling off their country’s farms and forests to foreigners.

That’s what’s got to be in it for them, David – before they’ll come out and vote for you and the Labour Party.

It’s not rocket science. It never has been. Eighty years ago, ordinary working-class men and women, with nothing like your education, knew what had to be done, and they set about drawing up plans to make it happen. Along the way they were helped by decent middle-class folk like the “Three Wise Men of Kurow” – the local GP, the Presbyterian Minister and the local headmaster – who between them, on the doctor’s dining table, drew up the specifications for what, in four short years, would become the New Zealand Welfare State.

Everyone in the labour movement understood that the policies they were promoting would be fiercely resisted by employers, farmers and all the many other groups representing “authority” – but they didn’t let it stop them.

And neither should you, David. Forget about the effectiveness and efficiency of New Zealand Inc. Just look after the people, David. Give them “the justice they deserve” – and New Zealand will thrive.