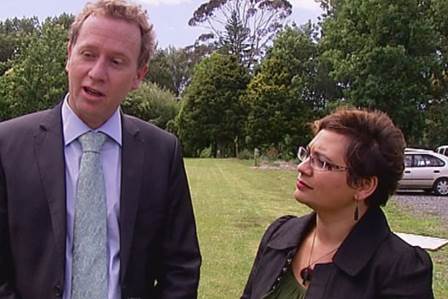 THE FIRST QUESTION TO ASK is “What the bloody hell is going on!” What is it about a left-wing coalition government made up of Labour, the Greens and Mana that David Cunliffe doesn’t get? Is he seriously planning on winning enough votes to make offering the Greens a central role in the next government unnecessary? Are there still sufficient Labour MPs with ideological objections to a Red-Green alliance to prevent Shane Jones from being properly disciplined? Is Winston Peters truly preferable to Russel Norman? And are we really still asking these kinds of questions just six short months away from polling day?

It was in August 1998 – more than one year out from the 1999 General Election that Jim Anderton invited Helen Clark to address the Alliance Conference. Her acceptance and appearance at the Conference produced the sort of priceless visual propaganda that wins elections. Seeing Jim and Helen reunited reassured New Zealanders that the bitter civil war on the left of New Zealand politics had come to an end. Instead of reserving their largest artillery shells for one another, it was now clear that Labour and the Alliance were finally ready to train their guns on the one true enemy – National.

Had Cunliffe enjoyed the same measure of control over his party as Anderton exercised, and had he possessed just a little of Anderton’s political imagination, he might have arranged something similar for last year’s Labour Conference in Christchurch.

An invitation to Norman and Metiria Turei – culminating in a joint statement on meeting the challenges of Climate Change – would have provided both parties with invaluable visual propaganda. New Zealand would have seen a youthful “government in waiting” eager to address the real issues of the twenty-first century. The natural pairing of Red and Green, which first confronted voters in 1972 with the formation of the Values Party would, at last, be something Kiwis could vote for with confidence.

An opportunity missed. Bad enough in itself, but when set alongside Labour’s unfathomable embrace of Winstonism – that tongue-in-cheek redefinition of democracy as the decisions politicians get to make only afterthe people have voted – the situation becomes so much worse.

By adopting the position of only discussing who is in and who is out of the governing coalition after the votes have been counted, Labour is asking the electorate to buy a pig in a poke. If you vote Labour you’re pretty sure to get Cunliffe, but whether he’ll be governing alongside Norman, Turei and Harawira, or Peters, Flavell and Dunne – you will have absolutely no idea.

The grim spectre of 2005 looms again over the Greens. In the tight circumstances following the 2005 election, it was Labour’s refusal to stand solid with their ideological soul mates; taking instead the 30 pieces of silver offered by Mr Peters; that quite literally broke Rod Donald’s heart.

The Greens must never again allow themselves to be placed in that position.

In his NZ Politics Daily editorial of 11/3/14, Bryce Edwards says:

“The fundamental problem for the Greens is that they are essentially hostage to the Labour Party, and will have no post-election leverage […] In political science terms, the Greens are now a ‘flank party’ without any ‘blackmail’ potential in coalition negotiations. It means that if Winston Peters demands a Green-free Labour-NZ First coalition, Labour can easily oblige, knowing that the Greens will not vote in any way to bring the government down and let National govern.

“The Greens could announce that they have no pre-determined coalition partner and that after the election they would provide parliamentary votes for whatever party implemented, say, five key radical policies. This would, of course, mean that the Greens would have to put less emphasis – or none – on Cabinet positions or other baubles, which is apparently not a strategy favoured by the co-leaders who clearly see the need for Green cabinet ministers. It is also a strategy that could risk causing a subsequent general election or give Winston Peters the excuse to go with National.”

But if they are not to succumb to precisely the fate Edwards has spelt out for them, this is precisely the strategy the Greens should now adopt.

Labour must be presented with a very clear choice: either declare a Red-Green coalition before the election; or, after the election, be faced with either accepting or rejecting five transformative Green policies. If these non-negotiable policies are refused, Labour must be made to believe that the Greens will happily precipitate a new election – which it will do all within its power to transform into a referendum on the five big changes it is proposing.

The Greens challenge now is to work out what those five transformative changes should be, and to prepare New Zealand for the situation it will be required to face if Labour continues to scorn the winning formula so successfully tested by Jim Anderton and Helen Clark.