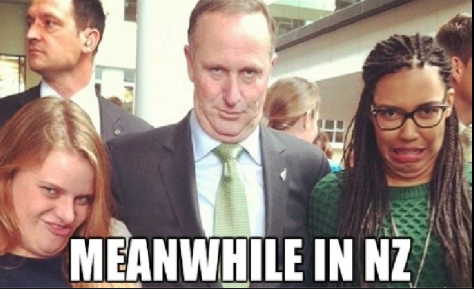 When you open your power bill next month and it’s increased by 24% you will suddenly not care about the mainstream media’s feeding frenzy over David Cunliffe’s supposed gaffes and ask, ‘Why the fuck is my power bill up 24% and why the fuck is this the first time I’ve heard about these power increases and what was that about Labour and the Greens decreasing my power Bill and why isn’t that on the news instead of Patrick Gower auditioning to be Key’s Press Secretary, and is this what happens when you sell our power companies, thanks John”.

Those are the questions you will ask, in about that order, next month when you open your power bill.

The myopic Press Gallery beltway fetish is a self saucing pudding, it isn’t the bread and butter issues facing the majority of the voters who are hungry for information about the way they are going to balance the monthly bills. Instead of a policy debate on the real issues, we get self selected narrative to paint David Cunliffe out as ‘Tricky’.

The bubble world of the beltway has been shown up several times recently as being out of touch and their hubris for a National Party landslide could be their next.