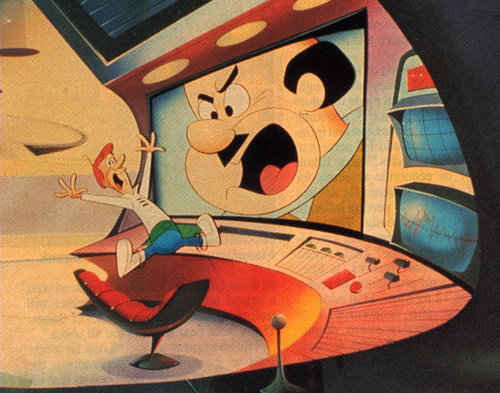 I used to love the The Jetsons.  Remember?  The cartoon with the family from the future!  Brilliant Saturday morning cartoon viewing: “Meet George Jetson…”

Looking back now, I see elements that make me cringe, namely the lame gender stereotyping.  They got one thing absolutely right, though, with the precarious nature of work in the 21st Century.  This has even lead to an Americanism called “George Jetson Job Security” which, and although really tongue in cheek, does actually reflect the insecurity for many people in our modern workplaces.

Who would have thought the writers for The Jetsons were predicting the impact of neoliberalism on mid-western US families?!  Impressive!

Back to the show…what I really loved was the imagination.  The future looked like such an interesting place!

Flying cars, gourmet meals at the touch of a button, house robots at your beck and call.  And, given the air quality evident from the bright blue skies in the cartoon, clearly the future of The Jetsons saw global carbon emissions retract with renewable energy widely available.

But my favourite insight into the future on The Jetsons was the video phone.  I couldn’t think of anything better – being able to actually see the person you are talking to who is on the other side of the city/country/planet.  What?  No way!!

I become convinced this was even more exciting when the video phone appeared in Back to the Future Part II.  By the time Mel Brooks was using it in Spaceballs – to ridiculous and infantile comic effect if you can remember the particular scene – I knew that the moment the video phone came into being I would be living in the future.

Personally, I was a little disappointed.  I thought the arrival of the video phone would result in some sort of public holiday: the future is here, people of planet earth!  But, no, the pace of technological change has just been so incredibly rapid in the past thirty years that the advent of the video phone became accepted as the norm fairly quickly.

So, and as part of its mainstreaming, I was not at all surprised to read in The Guardian that a video phone platform is the latest target for state authorised surveillance.  In Britain, the timidly named Government Communications Headquarters (GCHQ) has been conducting surveillance of individuals through a programme called “Optic Nerve”.

The Guardian reported that Optic Nerve seems to have been running since 2008.  In a period of six months in 2008, again according to The Guardian, the GCHQ collected “untargeted” images from 1.8 million Yahoo accounts using Yahoo’s webcam platform.  Essentially, these are images taken while you are talking on the video phone – a screenshot if you like.

Now, just indulge me and take a moment to think about that a key word in that last paragraph: “untargeted”.

For emphasis, let me repeat: “untargeted”.

Yep.  No evidence based surveillance.  No individual warrant.  No apparent and open oversight.

Yahoo responded to this discovery with anger calling it “a whole new level of violation of our users’ privacy”.  I completely agree.  I understand the rationale – developing facial recognition for detection of “suspects” –  but the broad sweeping nature of surveillance over private (and intimate) conversations is to me a completely disproportionate response.  This is not the future I want.

Of course, GCHQ is a partner of our own GCSB.  So, after reading in The Guardian of this overreach of state power involving one of our security partners, I was very interested to see what the response in New Zealand would be.

Well, I was not disappointed by the quality of our mainstream media reporting: Webcam spies get an eyeful of nudity appeared from Fairfax.

So, we have a massive erosion of privacy by one of our security partners and we are only interested in the saucy bits?  Oooh…the spies were capturing snapshots of people being a bit naughty, in their private and personal communications.

Is this how pathetic and superficial our analysis has become?  This obsession in our media to connect anything with a sexual element does not serve us in any way.

To me, this is a complete erosion of privacy.  I feel we are standing by and watching our private spaces disappear.  All in the name of “national security”, but has anyone asked if our private moments are deserving of security?  Isn’t that in the national – our – interest?

Personally, I would like to know if New Zealanders are being targeted.  If so, by who?  On what basis?  And, to what level are our security services complicit – either directly or indirectly?

This all brings me back to the need we have in this country, and others, to discuss the correct balance between safety and privacy as we migrate into this digital world.

This is not a political discussion.  It is a societal one.

For example, and contrary to how he has been portrayed, Edward Snowden is not some sort of raving left wing looney.  He comes from a conservative, republican background who began to be influenced by libertarian values.  The point is that this impacts all of us right across the political spectrum.  As a society we need to be upfront around the extent of state power and how far we allow that to come into our daily lives.

Maybe I was right.  Maybe, the video phone did bring in the future.  Just the one that George Orwell imagined, not George Jetson.