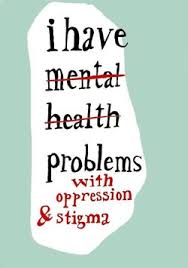 The wide spread social stigma and myths around people who have a mental health diagnosis is what we really, should be discussing

I think about mental health a lot. I have many years of lived experience as someone related to me has Bi-Polar and I also support someone very close to me who has clinical depression and has gone into serious unwellness 3 times in the last year and on the 3rd time I had to ring the CAT team and commit him to a psychiatric ward.

The fact is, in my experience there are massive social stigmas around people who have a mental health diagnosis. And it shits me. It shits me because people (not just those close to me) have to face misunderstanding, stigma and judgement from a culture and media that pedal some really damaging ideas around mental health.

There have been many articles written on Charlotte Dawson, a model and media personality who died by suicide last week. People have made some really—reductive—claims as to why Dawson, who suffered from depression took her own life.

Deborah Hill Cone’s NZ Herald article “It wasn’t just depression that claimed Charlotte” caused intense criticism and controversy, Hill made massive speculations on why Dawson took her own life she wrote, “It wasn’t just depression that claimed you. I think you were also claimed by the fear of getting old. It is hard being 47. At the crisis of middle age, losing your sexual currency, becoming invisible.”  First of all, if Dawson had anxiety in relation to getting old (which is speculation) this would all feed into the diagnosis of depression – depression and suicide are complex issues, there is never just one reason or one trigger for taking your own life.

Cone went on to state, “You [Dawson] felt shunned for being single, being childless, for having a mental Illness. The truth is no one really cares. But for you that was even worse,”  the thing is in our society people generally do care (for all the wrong reasons) if you have a mental health diagnosis for example there is major discrimination in the work place when someone has the courage to openly tell people they have a mental health diagnosis–or show signs of having one. In Australia where I currently live, more than one in five Australians have experienced discrimination in the workplace due to mental illness, according to a study by the Mental Health Council of Australia (MHCA).

“The addition of a dependant brings the urgent need for self-preservation. It’s what all parents know: that children not only enrich life beyond anything you’ll ever experience, they save you too. You can no longer party hard. If you do, the unit will begin to fall apart.

Martin Amis has a line about parenthood standing in the way of suicide, something like: well, you can’t kill yourself now, because of the children… the kids can be the best anchor to life you can have.”

Having children does not always “save you”, many people have taken their lives who are Mothers or Fathers. Reducing reasons for suicide to a few or focusing on one reason such as “she was afraid of aging” or “she was childless”, minimises the complex battle many people who have a diagnosis of depression fight – not to mention as Natalie Robertson an AUT lecturer points out,

“It is sexist in the extreme [for Hill and Grimshaw] to speculate that a woman would end her life because she doesn’t have children, unless she has already stated this as the cause of her depression. Would it be speculated on as a cause for a man?”

You know what? Most people know SWEET FUCK ALL about why people become suicidal or take their own lives because the majority of people when a friend or someone they know starts cycling into unwellness, walk away. Not everyone, there are friends, family members and partners who are supportive and walk alongside someone who are struggling with mental health issues. But overwhelmingly people, often have no idea what to do when someone starts showing signs of a mental health issue, so they ignore it.

When people take their own lives as my mum Libby King, who is the Group Coordinator at Tiaho Mai (Adult Mental Health) said to me, “…part of the reason can be because they are tired. Tired of getting out of bed. Tired of facing the day. The struggle just gets too much. The battle is no longer worth fighting.”

For some, depression becomes physical–it becomes a “psychic pain”. Oscar*, a man I talked to who was diagnosed with clinical depression at 15 and then with a duel diagnosis of Psychosis at 27, (he feels he has suffered from depression from the age of 9) told me it can feel like, “someone is pushing down on his chest” and “it can become physically painful to move or even get out of bed”. Most of the time he cannot really articulate why he wants to die, he just feels “tired” and like “it is not worth it”. He came from a deeply religious family and his father’s discipline included routine violence. He has spent many years going from what he describes as, “one dead end job to the next”. He is now 27 and has been dealing with his diagnosis for 18 years. Oscar says this has all contributed to him, often feeling like he no longer wants to be here. But he maintains there is no one reason.

Even know sometimes Oscar feels like giving up, he recognises how much pain he feels is not normal (no matter how long he has felt it) and it does not need to be this way. Oscar has decided to use his personal understanding of mental health to support others and is about to leave Australia, where he currently lives for New Zealand to undertake a peer support course in the hope of becoming a peer support worker (consumer worker). His intention is to learn better skills to deal with his own depression and support those who are struggling also.

Deborah Hill Cone’s article has earned her many things: people have demanded she be fired, she has faced online abuse and as Cone states “[she] became the target of so much hate”. One person in reaction to Cone’s article wrote this to her, “you’re a vile disgusting bitch, you are a f***ing goblin, go hang yourself and do the world a favour, I hope you get as much hate mail as Charlotte did so you go through what she did, you maggot. Also, fix your eyebrows.” Yeah, I am not trying to become a moral compass for society here, but Charlotte Dawson had some pretty big issues with cyber bullying, what some people said to Cone is just plain fucking wrong.

Shouldn’t we as writer’s, thinkers and people who have any sense of humanity be attacking the negative and ignorant social stigmas and myths attached people who have a mental health diagnosis have to face, not just Cone’s words? Isn’t Cone’s article systematic of a society which often minimises and misunderstands the experiences of people who have a mental health diagnosis? Oscar told me he often, “feels judged and alienated because when [he] cycles into unwellness, people stop talking to him and he has lost friendships over it”. How many people with depression have been told to “just get over it” – yeah, because it is just that easy.

Willard Foxton, a journalist who lost his own father to suicide wrote,

The audience wants closure, wants to fit the suicide into a broader narrative, to make it “make sense”. Of course, suicides rarely make sense. They are almost always much more complex than they seem. Four years on from my Father’s death, I still don’t really know why he killed himself – and I never will.

We should, as a community be attacking the wider social issues people who have a mental health diagnosis have to deal with, not just one article by one woman. Like most people, Cone (seemingly) has limited understanding of mental health and this unfortunately, is also true for our wider society.

If you or someone you know is thinking about suicide there is help out there for you, a lot of it. Suicide is preventable. We can stop it, if we have the right tools and support systems around us. Please call these numbers or have a read of these websites if you or someone you know is suicidal, having difficulty coping or you just want to learn more about Mental Health:

For Journalists (in relation to writing on suicide)

The Samaritans guidelines to writing on suicide: