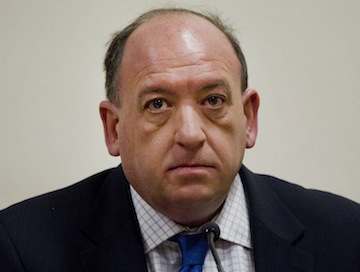 31 July 2012: Valley Longwall International (VLI) pleads guilty in the Greymouth District Court to three health and safety charges and on 26 October is fined $46,800. Pike River Coal’s  receivers enter no plea and a year later are fined and order to make payments to the families. PRC did not pay the fine and made only a minimal payment to the victim’s families.

30 October 2012:  A  Royal Commission of Inquiry concludes and presents a report to the Attorney-General, Chris Finlayson.

10 December 2012: “Prime Minister John Key will personally apologise to the families of the Pike River 29 after a Royal Commission report blamed the Government for lax oversight of the mine.” (Source)

16 October 2013: Peter Whittall’s lawyer, Stuart Grieve QC,writes secretly to the Ministry of Business, Innovation and Employment (MBIE) suggesting that  in ‘‘advance of the $3.41 million being made available, it is proposed [with precise terms to be agreed] that  …  the Ministry will not proceed with the charges laid against Mr Whittall by advising the Court that no evidence will be offered in support of any of the charges.’’

12 December 2013: Judge Jane Farish drops all charges against Peter Whittall saying, ‘‘Some people may believe this is Mr Whittall buying his way out of a prosecution, but I can tell you it’s not.’’ Peter Whittall agrees to pay compensation of $3.41 million to the families of the dead Pike River miners.

27 February 2014: Stuart Grieve’s secret letter to the Ministry of Business, Innovation and Employment (MBIE) is made public under an OIA request.

‘‘Some people may believe this is Mr Whittall buying his way out of a prosecution, but I can tell you it’s not.’’ –  Judge Jane Farish

‘‘It arrived by Stuart Grieve, nobody asked if they were prepared to offer money – they offered money. Very careful legal advice was taken as to whether it was proper to take this into account at all. We got clear legal advice that we should take it into account, and it was one, but only one, of that factors, and not the predominant factor in the decision that was taken.’’- Geoffrey Podger, CEO, WorkSafe NZ

‘‘I wish to make it very clear, again, that there was no such arrangement between the defence and prosecution.’’ – Brett Murray, General Manager, Worksafe high hazards

Stuart Grieve: “This letter didn’t just come out of the blue. That’s not how it happened. Although that is perhaps the impression that seems to have been given by what I’ve read read, that Worksafe chief executive said that the letter just arrived, and we offered money. That’s not how it happened at all. The [letter] needs to be looked at in context. Over a period starting from about, quite early last year, the solicitors for the defendent, Mr Whittle, and I, were getting disclosure from  MBIE that very quickly revealed that they had, there were  significant problems with the electronic disclosure and then that in turn revealed that there were significant problems with the way  the investigation had been  carried out because a lot of relevant materials stored on computers operated by all sorts  of employees of Pike [River Mine] had not been recovered or retained and a lot of that would well have, could well have been relevent to the defence. There were also significant problems with the evidential aspects of the case.”

“As a result of all these difficulties, I mean the trial was going to be a long one anyway, but these difficulties which would have had to be contested in court would have made the, on our assessment, the trial would’ve, could have lasted anything between  four to six months. And it was going to be horrendously expensive. If this trial had proceeded and the ministry had failed, the families would’ve got nothing. As it stands now, the families ended up getting the reparation that had been ordered by the judge against the company, which was of course in receivership.”

Mary Wilson pointed out to Grieve that the directors hadn’t been prepared to pay compensation, unless Mr Whittle wasn’t charged.

“Well, look,  all I can say to you is that the money was offered , the charges were dismissed, but the suggestion that it was a backroom deal, is just quite wrong. This was not something that was just agreed by the prosecution. It was at the Court hearing when the charges were dismissed. The Prosecution said that it was considered on principle and conventional basis in accordance with the prosecution guidelines. It had gone, as we understand it, we were told it  was going to be considered by the solicitor-general, so that it went to, you know, significantly high up, in [the] Crown Law office. You know, to say that it was just a back room deal, sort of, is a criticism that’s easily made, but we were told from  the outset that it was going to be considered by the Crown on a principled basis and as I understand it and the submissions to the Court confirm it, that’s how it was done.” – Stuart Grieve QC, interviewed by Mary Wilson, on Radio NZ’s Checkpoint

Because, really, this isn’t just a case of something rotten in the state of Denmark…

… this is a case of advanced decomposition.

TV3: Key to apologise to Pike families in person