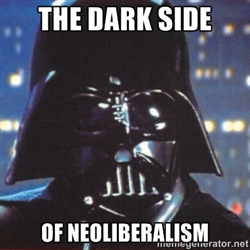 One of the favourite games of the New Zealand middle class is “Guess whether the Reserve Bank will raise or lower interest rates next month?” We don’t often ask what the point of it all is. Our obsession with second-guessing interest rates – especially mortgage rates – is a bit like participation in a shamanistic ritual.

With the neoliberal revolution of the 1980s, previous overriding policy concern with the balance of payments (and to a lesser extent, full employment) was replaced with an obsession with inflation, and the use of government-vested authority to fight the inflation dragon.

The inflation war was, and still is, a phoney war. Globally, the great inflation of the 1970s was largely killed off by the 1981-82 recession. In New Zealand the inflation problem lasted until the mid-1980s, but was clearly on the wane well before the introduction of the Reserve Bank Act in 1989. Looking at the second chart here, the inflation blips in 1987 and 1989 are due to the introduction of GST (goods and services tax) and the raising of the GST rate in 1989.

In the 1990s, the inflation rates in the developed economies were much the same as each other, regardless of the monetary policies adopted or not adopted.

In the 2000s, New Zealand had a number of inflation blips. Two of these – 2001 and 2008 – were linked to sharp falls in the New Zealand dollar exchange rate and affected mainly the “tradable” sector where prices are set internationally. The blip in 2011 was due to the rise in GST.
Leaving these blips aside, the main period of domestic inflation increase was 2004-2008, and that was the period of activist monetary policy, in which the Reserve Bank’s Official Cash Rate (OCR) was raised from 5% to 8.25%. It was a period in which tradable inflation in New Zealand fluctuated but was commonly close to zero (thanks mainly to the rising exchange rate), and domestically-generated inflation (the non-tradable sector) was consistently around four percent.
Further, 2004-07 was a period of housing and sharemarket price bubbles. I think that these bubbles were caused by tight monetary policy pushing up interest rates, rather than in spite of such policy.

There are three reasons why higher interest rates are supposed to lower inflation:

· The placebo or expectations effect. If we believe a policy will work, then to some extent it will work. Sometimes we continue to believe that a policy or treatment will work, because an authority-figure says it will work, even when the historical evidence suggests that such a policy will not work. Thus any inflationary effect from rising interest costs may be offset by our counter-inflationary faith in our monetary faith-healers. The literature of new classical economics emphasises this ‘expectations’ effect.

· The exchange rate effect. For any given country, a rise in interest rates will lead to a rise in the exchange rate (or lessen a fall in the exchange rate). This lessens the impact of international influences on the inflation rate. Economists tend to play down this effect, because the monetarist theory was conceived in a closed-economy context. (The global economy is a closed economy, and, the US economy, due to its size, is often thought to approximate a closed economy.) This effect may represent exporting inflation rather than correcting it.

Ultimately, however, higher interest rates add to the cost structure of an economy. Business and household debtors must pay more in interest. Households seek to recover higher interest costs in higher wages. And, when interest rates rise, businesses are under pressure to pay higher dividends; competitive pressures dictate that yields on private equity must rise when yields on debt are also rising. Businesses seek to recover higher debt-service and equity-service costs in higher prices.

Of even more interest to us is the fact that, with rising interest rates, banks become increasingly shy of unsecured lending, and of small-business lending in general. Further, in an open economy such as New Zealand’s, the higher interest rates suck more foreign savings into New Zealand’s banking system. (See my 21 Feb Scoop article, ‘Global Savings Glut?’).

With international money flooding a country’s banking system, and preference for secured lending over risky business lending, banks increasingly lend on the security of real estate and other financial assets. Such lending pumps up the real estate market and the sharemarket. Thus, when the Reserve Bank intervenes to push up interest rates, oxygen is being given to the inflationary asset bubbles that the policy is supposed to dampen down. The promise of capital gain makes speculator debtors more insensitive to interest rates than business debtors are.

We might note that BNZ economist Tony Alexander is known for his prediction that the present New Zealand housing bubble will continue until 2016 (especially “Auckland Prices Up 27% – Now Watch The Migration Effect). While Alexander emphasises supply issues in his writing, he is making his predictions knowing that that the monetary policy environment in 2014-16 will be much like it was in 2004-07, albeit with lower interest rates at the start. Further, the predicted rise in “building costs” is essentially an issue of rising demand for new houses, fuelled by banks flush with funds.

I think Tony Alexander’s predictions on house prices and interest rates are a realistic bet. As with other bank economists, he bases his predictions around what he thinks policies will be, and not because he necessarily believes that those policies will be the best policies. He, like most economists, will be unsurprised if the Reserve Bank acts to raise market interest rates on Thursday 13 March.

I concur that the interest rate hike will probably begin in March, but believe that, at present

· inflation is the least of our economic problems

· the policy, if pursued in New Zealand and other advanced economies, will add to rather than subtract from global inflation rates

I will go further than Alexander in my predictions. I also think that it’s a strong bet that in the post‑2016 period (possibly in 2018) there will be another global financial crisis at least as damaging to the world economy as the last one.

Finally, on the theme that monetary and maybe other neoliberal policies are pursued as a matter of faith rather than as a matter of good science, readers may be interested in this piece by William Black in New Economic Perspectives: “Niall Ferguson’s Latest Gay Bashing is the Least of His Problems”. Referring to “theoclassical economics”, it looks at the rhetorical style and appalling predictive record of one of neoliberal economics’ greatest devotees; the historian Niall Ferguson.

Ferguson has been locked in a self-declared battle of economics with America’s most famous critic of neoliberalism: Paul Krugman. Krugman understands the economics of the global financial crisis better than most, and is indeed the most famous of the anti-austerians. The ‘debates’ between Krugman and Ferguson give readers insight into the battle out there waged between the neoliberal theocrats and the social scientists who seek to observe what actually happens.

Interest rates went up and down long before the ubiquity of central banks. Interest rates should rise as a matter of course when the demand by businesses for debt outstrips the supply of credit by savers. In the capitalist world in 2014 big businesses are our biggest savers. And household savings continue at higher levels than in the previous decade. The demand for business debt, where it exists, can easily be satisfied by the current supply of savings at current interest rates. When there are insufficiently profitable productive outlets for savings, then savings are diverted by financial institutions towards speculative borrowers.

There is no economic argument at present for higher interest rates. There is no shortage of savings, and there is no surfeit of productive borrowers. There is however a sense of entitlement among savers around the world that they should receive more yield on their savings. These savers do not always realise that someone else has to pay that interest. Should monetary policy pander to people who seek to profit excessively from other people’s indebtedness?