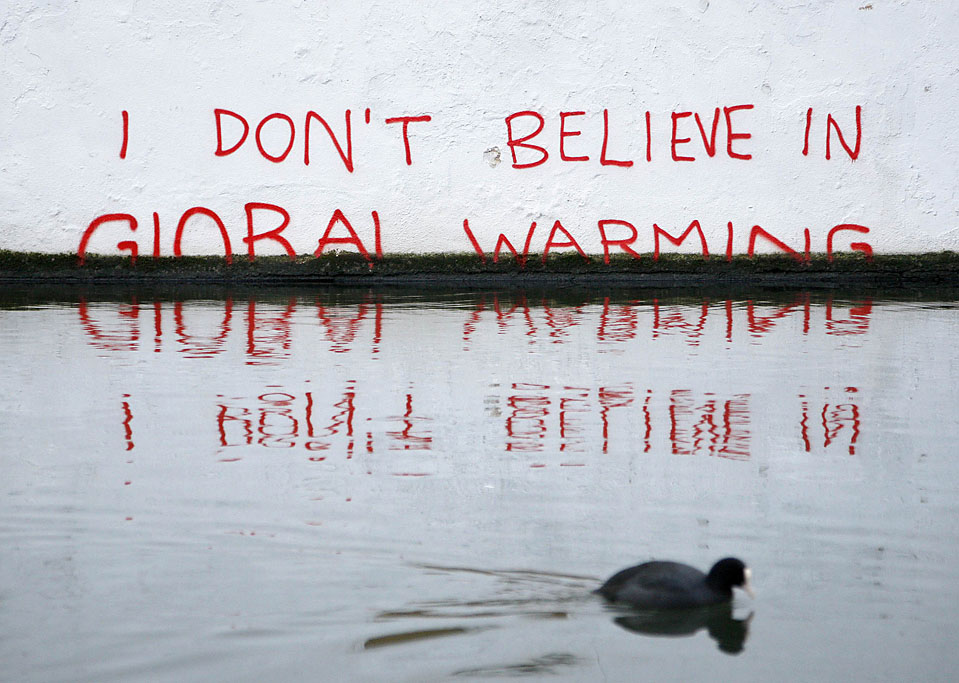 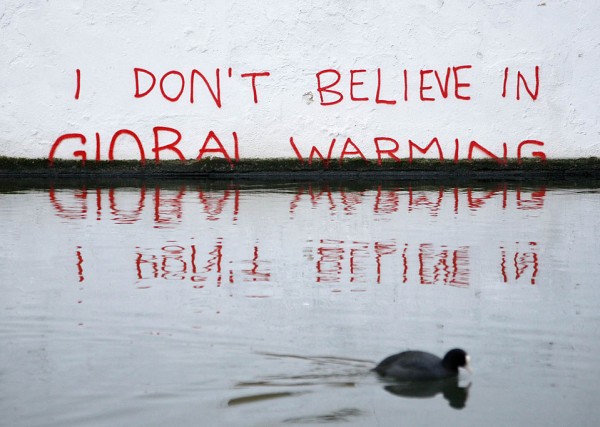 A few weeks ago, a pithy Daily Blog guest post by Green MP Gareth Hughes about offshore oil and gas exploration around New Zealand attracted an enormous number of comments — 498 when I last looked. That conversation soon veered off the subject of oil and gas and began to traverse the reality, or as claimed by a vociferous minority, the falsity of global warming and any consequent climate change. The resulting exchanges provide an object lesson in life through the looking-glass, that alternative world where warming isn’t happening, climate scientists are colluding in a giant hoax, and the poor old free market is being threatened by gangs of rampant watermelons — great wagon loads of fruit against freedom, leeks against liberty, and carrots against capitalism.

And it really is an alternate universe. The vociferous deniers of the reality or severity of the climate challenge are able to draw on an impressive array of “support” for their views, from newspaper opinion pieces, through a myriad of blog posts to verbose think tank reports. There’s even an alternative to the body established to review climate science, the Intergovernmental Panel on Climate Change (IPCC) – dubbed the Non-governmental International Panel on Climate Change, or NIPCC. What you won’t find is anybody doing credible research on climate. You’ll find nitpickers and naysayers, snide commentary on stolen emails, and books explaining the giant conspiracy by socialist billionaires and climate scientists to derail capitalism and bomb us all back to “feudal times”, in Rodney Hide’s memorable (and risible) recent coinage.

All of these sources, from blogs like Watts Up With That in the US or Jo Nova in Australia, to the weighty tomes delivered by the NIPCC, exist purely as a support network for people and politicians who find confronting climate change an affront to their beliefs or to their pockets. Every discussion about what to do about climate change can be derailed by deploying a few token arguments — all of them long debunked at serious web sites like Skeptical Science.

Take the NIPCC as an example. It is now on its second major report, the most recent published to coincide with the release of the summary for policy makers of the first part of the IPCC’s fifth report last October. The NIPCC is wholly funded by the Chicago-based Heartland Institute, a free-market lobby group masquerading as a think tank that has been taking fossil fuel money to campaign against action on climate change for most of this century. The prime movers in the NIPCC are retired scientists with long track records of campaigning for inaction on climate. They find, unsurprisingly, that climate change is not a problem.

Anyone with a background in basic climate science who has taken a look at the “work” of the NIPCC has found it to be unimpressive. In a post last year looking at the NIPCC chapter on the cryosphere, I described it as the Heartland Institute’s Big Book Of Lies About Climate Science, but writer Graham Wayne was even more blunt:

The NIPCC report is akin to a confidence trick. It is pseudo-science, badly presented, made difficult to assess or check, and depends on ‘blinding the reader with science’ that may look credible until you actually try to verify those claims against the peer-reviewed published literature.

In other words it’s a part of a big smoke screen designed to create the impression that there’s real uncertainty about the causes and consequences of climate change. There’s a PR campaign being waged against action to reduce emissions. This has never been a scientific debate, nor a debate about the science: it’s a political debate where the side that wants to do nothing resorts to misrepresentation, smear and innuendo to diminish any public or political perception of the need for urgent action.

As the signs of warming become ever harder to deny so the voices of climate denial become more shrill. For the poor foot soldiers of climate inaction, the wordsmiths who spam comment threads with the pre-digested objections cooked up on the other side of the looking glass, there’s an urgent need for reassurance. Take a look at almost any comment thread at WUWT or Nova: you’ll find the platoons of fighters for inaction proclaiming the end of warming, the imminent death of the climate problem. The cruel truth is that they’ve been saying the same thing for years. And yet the planet continues to warm, the ice to melt and the seas to rise. One day soon they will find that impossible to deny.