Keith Locke’s post: ‘GCSB complicit in NSA/GCHQ spying on Kiwis’ has compelled me to place on record how New Zealand’s spy agencies get away with having to obtain a warrant for every target they place under surveillance.

I now know that people like me accessing the WikiIeaks site were being monitored by Britain’s electronic spies in the Government Communications Headquarters (GCHQ).

He is quite right.

But the scary stuff is how, operationally, the NSA and GCHQ (as the two lead agencies within the Five Eyes network) operate on at least a “two hops” protocol or “contact chaining” authorisation.

To understand how innocent people get caught up in surveillance dragnets, it is crucial to understand fully how this two hops protocol works.

The Guardian describes the two hops as this:

One function of this internet record collection is what is commonly referred to as “data mining”, and which the NSA calls “contact chaining”. The agency “analyzed networks with two degrees of separation (two hops) from the target”, the report says. In other words, the NSA studied the online records of people who communicated with people who communicated with targeted individuals. (ref.)

For those who really want to go deep, for your convenience I’ve uploaded the NSA IG report (that’s mentioned in the Guardian paragraph above) to Dropbox. You can download it by clicking here.

Remember when it became know that Keith Locke had been placed under surveillance by New Zealand’s security agencies while he was a Member of Parliament? This became known in 2009 when New Zealand Security Intelligence Service files were released to Keith Locke by the then director of security Dr Warren Tucker.

At the time, both Prime Minister John Key and his predecessor, Helen Clark, said they were never told that the SIS was spying on Members of Parliament (ref.).

So how could this be? 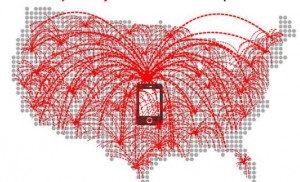 Basically, Keith, as a MP, was corresponding with a person from Sri Lanka, a person from the northern Tamil area who had arrived in New Zealand after seeking asylum and a place of refuge far away from the tyranny dished out by Sri Lanka’s government.

That person, it appears was under surveillance. And it is understood the SIS had obtained a warrant to surveil that person through the normal channels i.e.; the warrant was signed ultimately by Helen Clark as the prime minister at the time of the operation.

Under the two hops protocol New Zealand’s security agencies placed the target under direct surveillance, and also surveilled, and filed data originating from, those who were in communication with the target.

The agencies then looked for spatial patterns (in a data sense) among the communications of the people and groups that those, like Keith Locke, were also in contact with.

So, in a human-intel sense, it appears two hops has been used in New Zealand at least since September 11 2001, and perhaps earlier.

In a SIGINT sense, in the wake of the Snowden revelations, some say the dragnet has gone as far as three hops. See the Guardian’s piece on that aspect here.

Remember too how the Government Communications Security Bureau (GCSB) under reported the number of interception warrants and access authorisations in its 2013 annual report? In each case it under-stated the number.

The above two hops protocol suggests many hundreds more New Zealanders, if not thousands, have unknowingly been caught up in surveillance operations by our own security agencies.

In the GCSB’s case, the “embarrassing errors”, as the New Zealand Herald put it, would appear to be an understatement. The GCSB and SIS have failed to reveal the full truth in this ongoing sorry saga of smoke and mirrors.

If the GCSB was also forced to reveal the true number of people who have been placed under unwarranted surveillance due to the two hops protocol, then the trail may lead to some very interesting and unsuspecting individuals…

But, a word of caution, the deeper you look into this intelligence surveillance stuff, the deeper the wormhole goes.

Hope this doesn’t give you all nightmares.