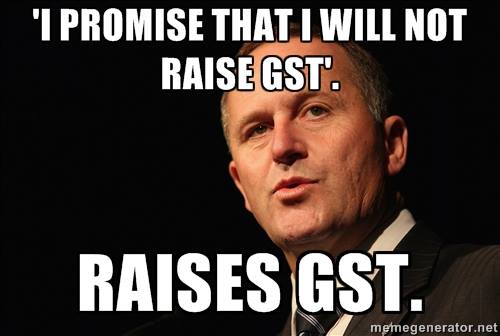 In the bitterly contested lead-up to the 2008 general election, National promised three tax cuts, to be spread over three years.

These were  prompted by the nine consecutive Budget surpluses that Labour’s Finance Minister, Michael Cullen, had posted between 2000 and 2008. The public perceived that the government had too much of our money and demanded tax cuts.

Cullen resisted, as his main priority was continuing to pay down billions in debt that Labour had inherited in late 1990s.

Key  and  National Party strategists heard the insistent  calls for tax cuts, and duly obliged – even though by November 2008, the global financial crisis had plunged the world into a recession, with only Australia and China escaping the worst effects.

On 1 April 2009, National delivered the first of two rounds of tax cuts (a third round had been scrapped, as by then the recession had blown a hole in the government’s revenue).

This is what the 2009 tax cuts delivered.

The following year, the second round of tax cuts was implemented,

* Professional property investor with 25 properties – $288.18c per week worse off

* Business owner structuring income to claim for Working for Families – $153.03c per week worse off.

As the reader can easily determine, very few in the above group were receiving “north of $50”. When the rise in GST was taken into account, the actual real cut in  taxes for average workers’ and families was reduced even further.

The only tax bracket that received a tax cut “north of $50” were those earning around $80,000 or more. Such as government ministers. And John Key.

Beware of politicians bearing promises and gifts. We will be the ones paying for it.

NZ Herald: Budget 2010: What the tax cuts mean for you