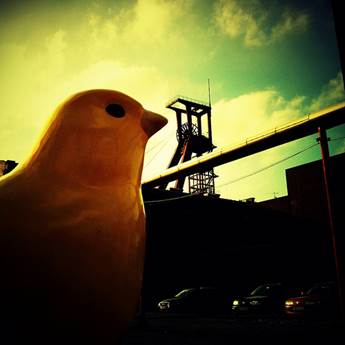 Canary in a coal mine (plural canaries in a coal mine) (idiomatic) Something whose sensitivity to adverse conditions makes it a useful early indicator of such conditions; something which warns of the coming of greater danger or trouble by a deterioration it its health or welfare.

THE DAILY BLOG has been running The Daily Blog Poll for nearly a year with, until now, entirely predictable results. Month after month, Labour’s narrow but unyielding advantage over the Greens presented a clear reflection of the Daily Blog’s readership’s collective preference for a decisive election result and a stable, centre-left coalition government.

A couple of days ago, however, the results of The Daily Blog Poll revealed a sudden and decisive shift in the preferences of the Daily Blog’s readers. For the first time that I could recall the Greens were in the lead – and there was nothing narrow about it. Labour hadn’t simply been dislodged into second place, it was running third behind the National Party. Overnight the Greens had moved from a rough parity with Labour to a 2:1 advantage.

I shook my head in disbelief. It had to be a rogue result. But this morning, when I checked, there it was again, a practically identical result. Greens 32 percent; Labour 22 percent; National 21 percent; Mana 9 percent; Internet Party 5 percent; Act 4 percent; NZ First 4 percent; Conservatives 2 percent; Maori Party 1 percent; United Future 0 percent.

Okay! I know, I know! There’s nothing in the least bit scientific about this sort of on-line poll. The 382 participants in the survey were all self-selected and the Daily Blog’s audience is a very long way from being representative of the wider New Zealand population.

But, don’t you see, that’s the whole point! If you exclude the National Party types getting to “know thy enemy”, the people who regularly read The Daily Blog, are overwhelmingly more Left than Centre. If Labour has shed 10 percentage points from the readership of this blog, its most sympathetic of audiences, how long can it be until the big, media-commissioned polls – Colmar Brunton, Reid Research, DigiPoll – all register a similar sudden collapse of Labour support among the general population?

Isn’t it highly likely that the readers of The Daily Blog are playing the role of the canary in a coal mine? Wouldn’t you expect an audience of such ideological sensitivity to register much earlier than the rest of the population Labour’s infuriating and increasingly obvious inability to win the 2014 election?

And I’m not the only blogger thinking this way. On his Dim-Post blog, Danyl McLauchlan, has posted “Gut Feeling Update” in which he admits frankly that:

“Up to now I’ve felt that the outcome of the election is too close to call. The sides are pretty even, small changes at the margins could have huge impacts on the results. But my gut feeling now is that Labour’s support will collapse and National will win a third term. It feels like a replay of the 2011 election in which Labour keep doing baffling, stupid things and then demand[ing] to know why the media is biased against them and how anyone could like John Key. People don’t want idiots running their country.”

The Right’s spies are also picking up the signs of impending disaster. Cam Slater’s Whaleoil blog, in a posting entitled “Labour and Cunliffe having a bad week, and it’s only going to get worse”, reports that:

“A mate of mine who travels a lot has noticed a distinct difference between National MPs and Labour MPs. He sits in the Koru lounge in Wellington and Auckland and observes.

“He has noticed that Labour MPs operate in cliques. When other caucus members walk in or past they rarely acknowledge each other, in fact disdain is the most prevalent demeanor.

There is real and palpable hostility between some members of the caucus.

“In contrast National MPs have a more collegial atmosphere, holding court and joking and enjoying each other’s company.”

Yes, I know, it’s Whaleoil, but putting all prejudice aside for a moment, I have to confess that Slater’s mate’s story has the ring of truth. I observed the behaviour of Labour’s caucus at last year’s annual conference in Christchurch and was struck by what can only be called their childish behaviour. These politicians, in whom working-class New Zealanders are being encouraged to vest all their hopes, weresulking. It was pathetic.

Would it really be so bad, then, if these same sulky brats were required to spend a few months eating the Greens’ dust? After all, it was the experience of being whacked all over the paddock for much of the 1990s by Jim Anderton’s Alliance that engendered just enough humility in Helen Clark and her colleagues to make them electable in 1999.

The problem, of course, is that we don’t have ten years to make Labour a fit and proper party to lead New Zealand. Hell, we don’t even have 10 months. And on their performance so far this year that is not going to be anything like long enough.

Call it the wisdom of crowds. Announce that we’ve reached a tipping point. Put it down to a change in thezeitgeist. However 2014 is later explained by the political scientists, I want the readers of The Daily Blog – the canaries in a coal mine – to remember that they were the ones who succumbed to the gaseous exhalations of Labour’s political decomposition long before anybody else.