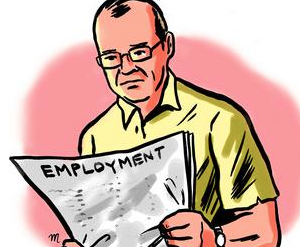 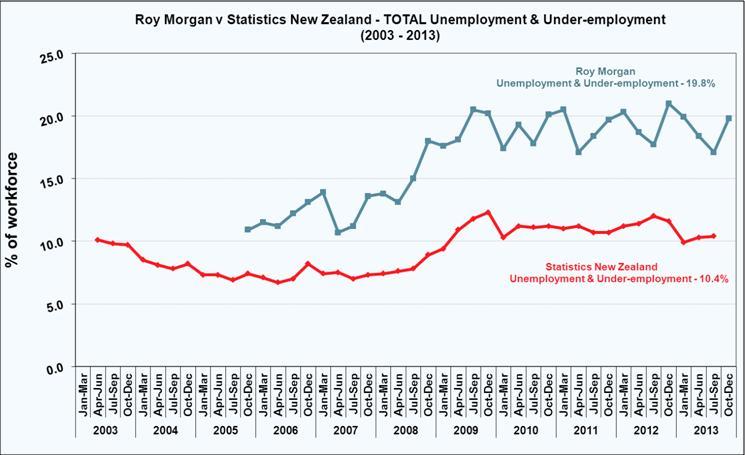 By contrast, the last Household Labour Force Survey (September 2013 quarter) reported 6.2% unemployed, and the 2013 Census survey gave a figure of 7.1%.

“The latest Roy Morgan New Zealand December Quarter 2013 employment figures show New Zealand unemployment at 8.5% (unchanged from September Quarter 2013). However, New Zealand under-employment – those working part-time but looking for more work – has jumped to a record high 11.3% (up 2.7%). It should be noted that this is the fourth year in a row that under-employment has increased in the December Quarter. However, this year’s increase is substantially larger than in previous years and must represent a major concern for Prime Minister John Key seeking re-election.

Bearing in mind that Statistics NZ defines being employed as anyone working one hour or more, per week, whether paid or unpaid, and it becomes apparent as to why unemployment/employment statistics in this country are skewed towards the low end. Statistics NZ is simply not presenting us with a real picture of  unemployment.

This, of course, suits governments of either hue, whether National or Labour-led.

Roy Morgan further  explained how their polling was conducted;

“The Roy Morgan New Zealand Unemployment estimate is obtained by surveying a New Zealand-wide cross section by telephone. An unemployed person is classified as part of the labour force if they are looking for work, no matter when.

Households selected for the Statistics New Zealand Labour Survey are interviewed each quarter for up to two years (eight interviews), with one-eighth of the sample being replaced each quarter. The first interview is conducted face-to-face. Subsequent interviews are then conducted by telephone.

Statistics New Zealand classifies an unemployed person as part of the labour force only if, when surveyed, they had actively sought work in the past four weeks ending with the reference week and were available for work or had a new job to start within the next four weeks.

No doubt National/ACT supporters will find little joy in these figures and will casually dismiss them as unreliable or some other reason.

But one suspects they will sing a different tune when a Labour-led government is installed later this year, and Roy Morgan polling continues to show higher-than-official  unemployment statistics.

At the point the Right will suddenly “discover” Roy Morgan.

Note: The Household Labour Force Survey for the  December 2013 quarter will be released on 5 February 2014.