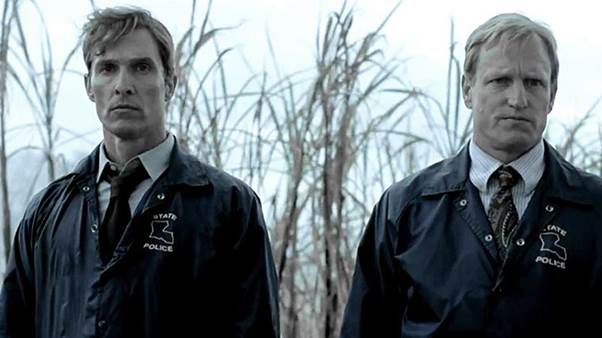 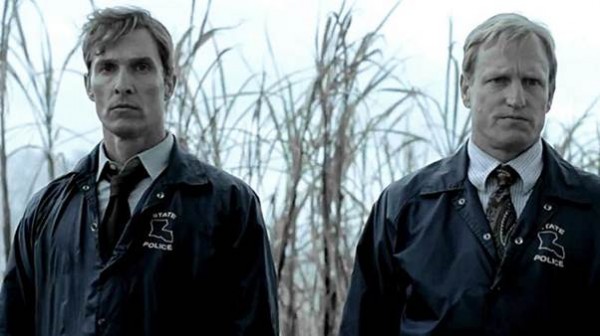 Falling squarely into the Southern Gothic genre, the 8-part HBO television series stars Woody Harrelson and Matthew McConaughey as two homicide detectives in pursuit of a serial killer. Written by Nic Pizzolatto, a former lecturer in American literature at the University of North Carolina, and directed by Cary Joji Fukunaga (Sin Nombre, Jane Eyre) True Detective is both an intellectual horror story and a horror story for intellectuals.

The viewers’ encounter the series lead characters, Detective Rustin (Rust) Cohle (McConaughey) and Detective Martin Hart (Harrelson) in two very different settings and two very different times. Their hunt for the serial killer takes place in late-1990s Louisiana. Seventeen years later, however, both men are called in for questioning about the conduct and consequences of what was clearly the defining case of their careers.

Pizzolatto shuffles the action between then and now in ways that both anticipate and explain the unfolding of the still unresolved plot (the series’ first episode only screened in the US on 12 January). It’s also a great way of helping viewers get to grips with the personalities of the two strikingly different protagonists.

“Rust” Cohle, appropriately, never sleeps. Ascetic, solitary and fearsomely intelligent, this former undercover drug cop has seen and done things which only the most rigorous mental discipline and strong liquor are able to keep at bay. Plagued by hallucinatory flashbacks from his days as a user and stricken by the accidental death of his infant daughter, Cohle has a powerful grasp on just how tenuous, tortuous and variable “reality” can be.

Martin Hart is as well-named as his partner. Passionate, volatile and vulnerable, Hart is at the same time a thoroughly conventional American male. As a husband, father, nominal Christian and police officer he has a surfeit of roles he feels he has to model. But life has a nasty habit of testing the values of role models to destruction. Hart finds it impossible to live up to his own strict moral code.

In the constant battle between his own best and worst instincts, Hart is not helped by the extraordinary philosophical and theological speculations of his partner. It is in Cohle’s devastating answers to Hart’s supercilious questions that Pizzolatto’s script truly catches fire:

“I think human consciousness is a tragic misstep in evolution. We became too self-aware. Nature created an aspect of nature, separate from itself. We are creatures that should not exist by natural law. We are things that labour under the illusion of having a self, the accretion of sensory experience and feeling, programmed with total assurance that we are each somebody. When in fact, everybody is nobody.”

Most people would seriously question the ability of such cerebral monologues to hold the contemporary television viewers’ attention – but Pizzolatto pulls it off. Cohle’s strange riffs on the human condition are powerful enough to keep on echoing in the viewers’ minds long after the credits have rolled.

The United States peculiar ability to be both new and old simultaneously provides the best part of Fukunaga’s cinematographic repertoire. Cell phones and computers share the screen with wooden bridges and levies that look like they pre-date the Civil War. Cohle’s cutting-edge anthropological musings compete against the sweat-soaked oratory of circus tent religious revivalism.

In the three episodes so far screened, religion has constituted the dominant theme. Even the serial killer marches to a religious beat, creating elaborate and deeply disturbing temples of cruelty in which to offer up his sacrifices. Hart’s conventional imagination cannot process the murder scene without reaching for words like “occult” and “satanic”. Cohle’s mind is much more creative. His dangerously empathic connection with the killer’s twisted motivations both shocks and fascinates Hart. Though neither detective yet realises it, the killer’s grisly tableau has already derailed their careers.

It’s the ramifications of that derailment that, seventeen years later, bring both detectives in front of a pair of investigators. The passing years have only sharpened the differences between the two men. Hart’s conventionality and pomposity has grown worse making his past and present hypocrisies all the starker. His former partner, meanwhile, has grown into a long-haired, back-woods sage with a fondness for canned beer and cigarettes. Confronted with the investigators’ apparent unfamiliarity with the depthless pathology of twenty-first century America, Cohle doesn’t know whether to laugh or cry.

Paused for the Superbowl, True Detective resumes its rivetingly gruesome journey into the dark heart of American religiosity next week.

If only New Zealand had its own HBO!