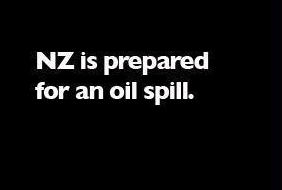 Key has made a challenge to Deep Sea Oil Drilling Protesters,

“The comments I made in rebuttle were to the leader look, come to Wellington, spend a week with my ministers and their ministries. If at the end of that week you’re proved to be right in the assertions you’re making, I’ll join your protest.

“But if you’re proved to be wrong, go out there and tell the protesters, because many of the things he was saying were just simply and utterly not correct. And that’s why those people are protesting – because they’ve effectively got misinformation.”

That’s quite a challenge.

However, issuing such a challenge is ultimately futile. For a challenge to be accepted, there has to be a measure of trust on both sides.

Quite simply, the days of trusting our current Prime Minister – with all his broken promises; bending the truth; lying by omission;  ducking responsibility; shifting blame onto others; telling only half the truth (or less); and outright lies – is long gone.

As just one example. Let’s not forget that when Greenpeace first released their modelling of a deep-sea oil blow-out, it was dismissed as “scare-mongering” by the Prime Minister,

So Key’s dismissal of Greenpeace’s report had been wrong.  Greenpeace’s modelling was not only shown to be correct, but actually under-estimated any disaster scenario.

Did Key admit that his initial assessment of Greenpeace’s report was premature and wrong?

Did the Anadarko report prompt Key to review his support for deep sea oil drilling?

The answer to each of those four questions is a flat out; “No”.

So this blogger wonders; why should any protestor  take up Key’s challenge when our Prime Minister has already demonstrated he is not to be trusted?