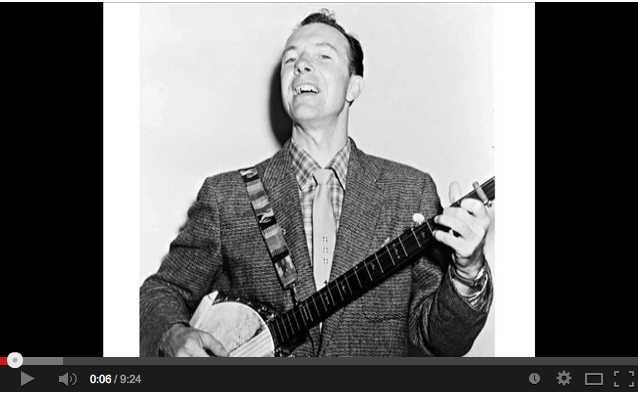 Legendary American folk singer and activist Pete Seeger died this week aged 94. His best-known songs included Where Have All the Flowers Gone?, Turn! Turn! Turn, a popularized version of the spiritual We Shall Overcome and, of course, If I Had a Hammer. Reading through the news this week, I know where he was coming from.

Grammys! Babies! Bullies! Flags! Death threats! Silly sausages! Racist clothes fights! Castles! Lecherous paparazzi! Go into hiding! Leave the country! Stay in the country! Mind the Gap! There is no Gap! The first week of the parliamentary year was so action-packed, distraction-packed even, that usual headline grabbers Colin Craig and Kim Dotcom couldn’t get a look-in. This was a week of opinions on everything and agreement on nothing. Helen Clark may become the next Secretary-General of the United Nations but New Zealand shows every symptom of one very disunited nation.

Speaking of the UN, “a United Nations Human Rights Council report says New Zealand needs to do more to combat issues such as child poverty, domestic violence and racial crimes. It’s just the second time New Zealand has been included in the report, which is issued every four years and provides recommendations on global human rights issues. This year’s document contains 155 recommendations for New Zealand, up from to 64 four years ago. The report said women and children are victims in the most severe cases of family violence, and men are responsible for two-thirds of the deaths of all children. Maori are over-represented both as perpetrators and victims.” (RNZ).

Put another way, under the stewardship of this government, problems associated with child poverty, domestic violence and racial crimes  have more than doubled. Or, put another way, in spite of this government’s coalition with the Maori Party, Maori are over-represented both as perpetrators and victims in this sorry, if not shameful, statistic. And the government’s response? On the very same day the UN released its report, Justice Minister Judith Collins, fresh off the plane from Geneva, embarked on a tirade against Metira Turei: “If she’s going to stand there and talk about child poverty and how the National Party is out of touch with poverty when she is the one who spends a tremendous amount on clothes and talks to us about child poverty. I think she’s a hypocrite.” Readers can decide for themselves whether Ms Collins (and Ms Tolley’s) responses amounted to bullying or racism (they can also ponder how long it’s been since Judith has actually seen a sensitive wee sausage). What is clear is that it was not Metiria Turei  who, that very same day, published an international report suggesting that National is out of touch with child poverty. Are those (presumably) well-dressed UN officials also hypocrites? Collins said last year on Twitter that a speech by Turei was “vile, wrong and ugly, just like her jacket today”. Child poverty, domestic violence and racial crimes: these are vile, wrong and ugly. Perhaps Collins should tweet less and do more about very serious issues.

When it comes to vile, wrong and ugly, right-wing blogger Cameron Slater’s attack on a recently-deceased young man on the West Coast was shocking and sickening. Hackers brought down his website and Slater started to receive death-threats. “What we’ve got here is a basic, locked-down, water-tight case of cyber bullying,” he said. “These people are acting like vigilantes over a perceived slight to their community and it’s actually proving the point that there’s seriously a feral underclass in New Zealand.” Slater has a following in this country, including Judith Collins and when he talks about a ‘feral underclass’, one wonders how many heads nod approvingly in agreement. If Slater speaks for the Right, I am reminded in the strongest terms of why I’ll be voting for the Left.

From the bottom of the barrel to the cream of the crop. At the Grammys, Lorde wowed the world. Together with Joel Little, she created a song and a sound that began life on the internet, a free contribution of creativity, and for this, she has been rightly rewarded with international superstardom. If ever there was an example of the web’s true purpose and potential, this was it, a pure antidote to the poisonous rabidity of Slater. As Fran O’Sullivan writes in the NZ Herald “In an interview last year, Lorde spoke about how she had always written and read and how that was a part of her that was “super important”. “And it’s a really good outlet for me to be able to say whatever I’m thinking and whatever it is that I’m trying to process. So, I don’t think it’s too weird. And I also think people my age these days … with the internet, you know, you can be making beats out of your bedroom and be a superstar.”

Of course, superstardom doesn’t come without consequence, including unsought advice. Charlotte Dawson used Lorde’s complaint about the media scrum she encountered at Auckland Airport as a licence to urge the star to relocate: “Unless you’re very mediocre, you need to get out of there.”  According to Weekend Herald columnist Paul Thomas, “Dawson needn’t concern us unduly. Even by the debased standards of celebrity culture, she’s the personification of mediocrity. But things are happening very fast for the phenomenal Lorde. While she seems determined to resist being sucked into the maw of the celebrity machine, it will be hard to stop the hype getting out of hand and prevent people like Dawson from piggy-backing on her runaway fame.”

Most politicians seem to agree. United Future leader Peter Dunne says it is not appropriate that New Zealand continues to fly a flag which included the Union Jack. “I think what we’ve got at the moment is anachronistic,” he said. “I think it smacks of British imperialism and we’ve given that away a long time ago, and I think we should have something that reflects our own identity.”

So, if it is time for this young, multicultural, Pacific nation, home to a 17-year-old double Grammy Award winner, long free of British imperialism to have a new flag, is it also not time it became a republic? To change the flag without changing the constitution is merely an exercise in rebranding: a political distraction not a declaration of independence. Unless we are prepared to seriously conjure with that thorny issue, we should leave the flag as it stands and confine election-year debate to issues that matter.