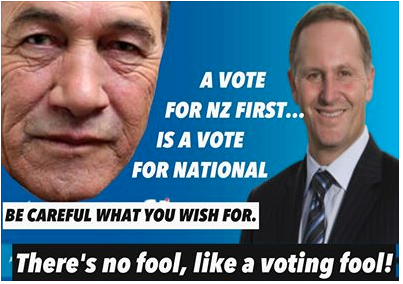 The bad news of the latest poll by TV3 holds little joy for those wanting to see a change of Government this year.

The bad news first, and let’s be clear for all the brothers and sisters of the left including every progressive voter in NZ, the latest TV3 Poll making NZ First the king maker is baaaaaaaaaaaaaaad news.

It’s bad news because if Winston has the option, he will go with National. He spent all of 2013 assassinating the coalition partners of Key so that National had no choice but to cut a deal with NZ First.

Winston can gain vastly more in terms of baubles from Key than he will ever gain from Labour and the Greens. All Key has to promise is not to sell any more assets and include Winston’s mates in the corporate welfare and you get a 3rd term of National.

Not one NZer should be under any illusion that Winston is going home to National like a prodigal son. If Winston makes 5% the left loses, the right win 3 more years.

The need for Labour, MANA and the Greens to use MMP tactically is more important than ever, because while the risk of a 3rd term of hard right masquerading as lite right is real, the possibility of a truly left wing Government comprising MANA, Greens & Labour is worth everything.

They were over their own margin of error twice in the month of the election so what the bloody 3 News/Reid Research Poll has to say on any issue is about as dubious as the newsworthiness of changing flags and what coat jackets politicians wear.

270 000 kids in poverty, widening inequality and an economic recipe that rewards corporate welfare and tax cuts for the rich are the issues of 2014, the rest is pap.