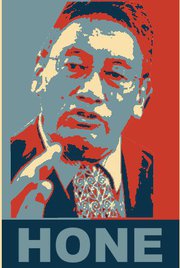 Now why would the Prime Minister make such a point of having a go at Hone Harawira?

Hone is the single MP of a small party (albeit with big ambitions) out in left field. Why waste time and energy on these repeated attacks? Especially since every day of leave Hone has taken from parliament has been approved by the speaker.

On the basis of National complaining Hone has been away from parliament too often the government has changed the rules and the speaker can now fine a parliamentarian for absence from the house and even suspend an MP in cases of extended unapproved absences. None of this would apply to Hone anyway so why the big deal?

The simple truth is that Mana stands in the way of John Key winning a third term as Prime Minister. How come?

The problem is that the Maori Party is on the ropes. With their MPs Tariana Turia and Pita Sharples resigning this year the party doesn’t have a dog’s show of winning either the Tamaki seat (Pita’s seat) or Te Tai Hauauru (Tariana’s seat) and the party’s fortunes will depend entirely on new co-leader Te Ururoa Flavell winning in the Maori seat of Waiariki.

However six years of supporting a National government are taking their toll. Maori voters want to change the government but they know that a vote for Flavell is a vote for another three years with National. That’s a hard sell for Flavell who just this last week has begun to try and distance the Maori Party from National – yeah right!

Key needs Flavell’s vote on National’s side and to try and improve Flavell’s election prospects Key is trying to undermine support for Mana among Maori voters.

In all likelihood the fate of Key’s government will rest on the Maori seat of Waiariki where Mana’s Annette Sykes came a close second to Flavell last election. This time Mana is going all out to win Waiariki and if this is the case then in all likelihood National will be out and the Labour-Greens will be in.

So Key attacked Hone for attending Mandela’s funeral and queried who had paid for it and now he’s on again about Hone’s parliamentary attendance. And true to form National-friendly papers like the Herald and right-wing commentators like Mike Hosking have picked up the bat to have another go at Hone on the Prime Ministers behalf.

Expect to see plenty more attacks on Harawira and Annette Sykes as Key does his best to turn Maori voters back to the Maori Party and help National win the election.

As a member of Mana (and a co-vice President) I think the more time Hone spends outside parliament the better. Mana is a campaigning movement – our ability to drive radical change the country so desperately needs depends on mobilising people around key issues because political power rests in communities – not parliament.