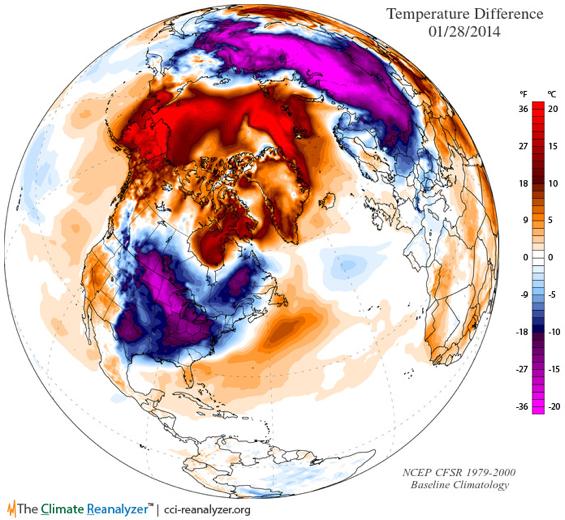 The results are in: 2013 was another warm year, and 2014 is starting where the old year left off – with weird weather around the globe.

Depending on which dataset you choose, 2013 was the fourth warmest year since records began, or the seventh — the exact figure depends on how the various scientific organisations calculate their average, but there’s no escaping one simple fact: it was another warm year in a long run of them, as this graph from NASA’s Goddard Institute for Space Studies shows:

The influence of the El Ninõ-Southern Oscillation (ENSO) – that great cyclical sloshing of warm and cold water across the face of the Pacific Ocean – on global temperature is obvious. Years dominated by El Niño events are warm, and shown in orange. Cooler La Niña years are shown in blue, and in between years – like 2013 – in grey. The long term trends are more or less identical. If you want to dig deeper into the various temperature metrics, RealClimate has an excellent post on the subject. Stefan Rahmstorf demonstrates how on one analysis, 15 years of warming on from the record-breaking “super El Niño” of 1998, an ENSO-neutral year like 2013 can nudge ahead in the global temperature stakes. Forget any thoughts about a pause in warming: heat has been accumulating in the climate system and it has been affecting the pattern of weather around the planet.

One of the most obvious signs of continued warming is the steady reduction in the amount of Arctic sea ice at the annual summer minimum. 2013 set no new records for sea ice melt, but it was still one of the lowest years in the record. That reduction in Arctic ice is beginning to change weather patterns around the northern hemisphere. The details of how this is playing out is an area of active (and urgent) research at the moment, but it’s clear that the existence of a huge area of open ocean in autumn where there used to be ice is having an impact.

Take a look at this map (from the excellent new Climate Reanalyzer site) of yesterday’s temperature anomalies over the northern hemisphere. That big area of red and brown over the middle of the Arctic Ocean shows temperatures up to 20ºC above normal. The purple and blue areas over the eastern US and much of Russia are as much 20ºC below normal.

The cold air that should be over the North Pole has gone walkabout, chilling the US, giving Fox News and right wing commentators the chance to scoff at global warming. Meanwhile, Alaska is on its way to what will probably be a record warm January. This sort of weather pattern has been dubbed the Warm Arctic, Cold Continents pattern — WACCy weather, for short. It’s what you might expect to see more of, as the Arctic sea ice continues to melt.

But that’s not the only odd thing that’s been going on up North. A big and very persistent ridge of high pressure loitering off the Pacific Northwest coast of the US and Canada has forced the winter storms than normally keep the West Coast well watered to divert north to Alaska – helping that state to break temperature records, and delivering huge snowfalls in the coastal mountains. Valdez has lost its road access to giant avalanches, which may not be cleared for a week or more.

While the moisture flows north, California is locked into a record-breaking drought. It’s been warm there too, with very little snow falling in the mountains to provide spring and summer river flows.

For anyone who is interested in the way the climate system works or for weather geeks, this is all fascinating stuff. For the people on the receiving end of the weather extremes, life may not be so much fun. But we can expect more of the same, more WACCy weather and weird patterns, as the atmosphere and oceans adjust to the heat accumulating in the system as the result of our carbon emissions.

The prospects for this year look interesting, in that sense of interesting that includes watching a slow-motion train wreck. That doyen of climate scientists, Jim Hansen, recently suggested (pdf) that the odds against a big El Niño starting sometime this year are shortening. If it starts early enough this year, then 2014 may be warm enough to beat current record holder 2010. If later in the year, then 2015 will have a good shot at the title. Either way, a flip into an El Niño pattern, with warm water spreading eastwards across the Pacific, will change weather patterns around the world and bring more — and different — extremes.