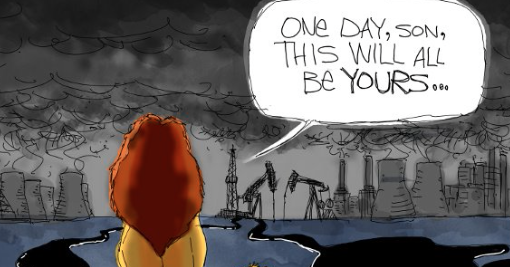 It was a mild, warm day with a light breeze, as protesters gathered at Midland Park in Lambton Quay, down-town Wellington, and mingled with office workers having their lunch on the grass; concrete steps; and nearby Astoria Cafe;

Others made their own;

Regardless of style and provenance, the message was crystal clear;

“Expect resistance” – Kiwi style – which will be demonstrated at the ballot box, later this year;

Political parties, that ignore public concerns at the dangerous practice of deep sea drilling, do so at their peril.

Some came dressed for the part, like this “sea gull”;

Aya (center) and two fellow Young socialists – the next generation of leaders on the Left. They will be leading the charge against irresponsible corporate, government, and capitalist activity which threatens our planet’s environment;

The message for all politicians, whether from the Left or Right;

Wellingtonians were invited to sign a Trespass Notice, to be delivered  in person to Anadarko;

Many in the crowd who did not take part in the protest were still eager to add their name to the Trespass Notice;

A simple message, delivered in a clever way;

So when did the notion of clean water; un-polluted seas; and respect for the environment become a “radical” thing? Isn’t New Zealand supposed to be proud of it’s “100% Pure” and “Clean and Green” reputation? Or, as National suggested, are those “aspirational goals” only?

Young Arlo, standing behind his dad, Green MP Gareth Hughes, as he addressed the protest rally,

Gareth spoke without a prepared speech, and said that this was about protecting the environment for children “like my son, Arlo”. His sentiments were well recieved by the crowd.

Arlo,  holding his simple message for what it’s all about;

Paul gave the science behind global warming and said that with  humans continuing to load up the atmosphere with CO2 and seas continuing to warm, it was time to call a halt.

Ariana began by repeating the simple truth; “Aotearoa is not for sale!” She said that deep sea drilling was part of the neo-liberal agenda to “mine it, drill, frack it”.

Ariana said that neo-liberalism was a failed economic system that exploited our resourtces for the benefit of the One Percent. She said bluntly,

“No one has the right to prostitute our land!”

Arians expressed her disappointment that Labour had not ruled out deep sea drilling and urged Labour supporters “to work on their Labour MPs“.

Many New Zealanders  will not accept dangerous decisions from politicians who, after all, are only seeking short-term gain and solutions to complex problems. When ‘ordinary’, middle class New Zealanders are expressing opposition to deep sea drilling and all the risks entailed, politicians who ignore their concerns run the risk of being tossed out of office.

Kevin Hackwell, representing one of New Zealand’s most formidible and credible environmental protection organisations, Forest & Bird,  speaking to  members of the public;

In fact, only one group was conspicuous with it’s total absence: the Labour Party.

And I think we know why.