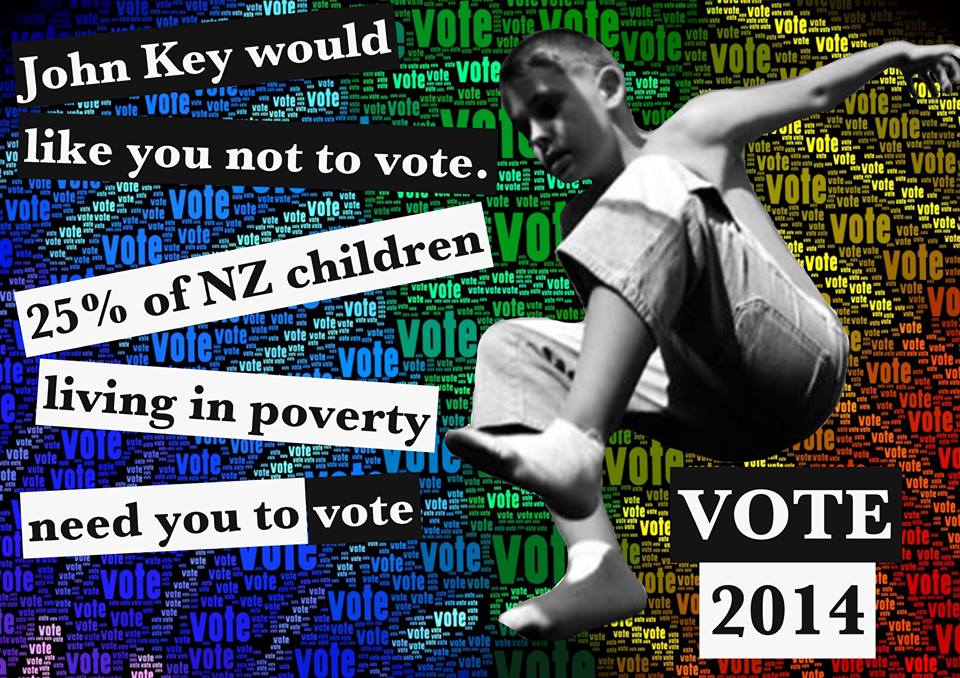 The latest Roy Morgan poll is bad news for John Key, as it confirms a downward trend for the current National-led government and a rise in the left Labour-Green bloc.

Taken between 6 January  to 19 January, 2014, the poll was conducted through   calling  1,509 respondents, both on landline and mobile telephones. (Currently, Roy Morgan is the only polling company that calls cellphones as well as landlines.)

The poll showed that voter-support for the main ‘players’ is fluid and that none of the parties can take anything for granted. At 46%, the Labour/Green Bloc is outstripping National’s 43.5%, which appears to have no viable coalition partners on the Right.

1. At 43.5% in the poll, this constitutes a 3.8 percentage-point drop from National’s election night result of 47.3%, in 2011. A few more percentage points lost between now and Election Day this year, and it’s Game Over for this hopeless government.

A point to consider is that part of Key’s unbelievable success can be laid at his public persona of an easy-going nature, and his uncanny ability to de-politicise politics. As he is forced to become more political in a very politicised year, that easy-going nature and de-politicised approach to issues, will be put to the test. The Prime Minister may yet become a political creature like his predecessors.

2. Labour’s 33.5% poll result contrasts starkly with their poor election night result in 2011, where their support collapsed to 27.48%. If the Labour-Green-Mana bloc can increase their support by a couple of more percentage points – the next Prime Minister will be David Cunliffe and Dear Leader John Key will be taking an extended vacation in Hawaii.

3. Though NZ First currently polls at 4% – just under the 5% threshold – this blogger believes Peters can pull his Party up, and return to Parliament. The only qualifyer to this is if the public are sufficiently  spooked by Peters’ continuing refusal to indicate which Bloc he will support, post-election.

In essence, voters will be reluctant to give him a “blank cheque”, knowing that (a) he will be “king maker” and (b) he may “make the wrong person king”.

For a Voter who supports a Labour-led Coalition – what if Peters joins the Nats?

For a Voter who supports a Key-led government – what if he opts for a left-wing government headed by Labour?

This “fetish” of Peters – whilst strategically sound in some respects – may start to annoy a significant proportion of swing-voters to such a level that they are reluctant to take a “punt” on him.

As always, when playing two elephants off against each other, there is a risk of being trampled underneath.

4. It appears that Labour has ‘cannabalised’ support from the Green Party. Anyone in Labour rejoicing at this will need to smarten up their ideas. The task ahead of us is to grow the overall Labour-Green-Mana vote – not cannibalise each others’ support. Attacking each other is a mug’s game and the only person who will rejoice is the current Prime Minister.

There were 800,000 non-voters at the last election. They are the ones we should be engaging with.

5. National seems to have lost support to the Conservative Party, which has recorded a rise in polling. But if the Conservatives fail to win an Electorate Seat, their small rise – at National’s expense – will not only be wasted, but will harm National’s overall Parliamentary seat numbers.

6. Act’s currently zero polling indicates that there may be no strategic value for National to “gift” them the seat of Epsom. If the next Act candidate (John Boscawen?) cannot pull in another Act MP on his “coat tails”, then the Nats might as well take their seat back.

That will be the end of Act and another nail in the coffin that is being prepared for neo-liberalism in this country.

8. The Maori Party is doomed.

9. The Conservative Party will not cross the 5% threshold, nor win an electorate seat. Aside from alienating women voters by calling them sexually promiscuous, or opposing marriage equality for all New Zealanders, regardless of sexual orientation; or admitting to breaking the law and assaulting his own children – Craig and his Party are simply too ‘fringe’ for 99% of New Zealand voters to stomach.

Even the religious-based Christian Coalition in 1996 could only achieve 4.33% of the Party vote. Not enough to cross the 5% threshold.

And if by some miracle (!), Craig wins an electorate seat and/or crosses the 5% threshold – who else will be on his Party List? The Conservative Party list may field candidates every bit as loopy and ill-disciplined as Peter Dunne’s rag-tag band of eccentrics in 2002. And that did not last very long either.

10. We are on track for a change of government at the end of this year. But there is still a lot of work ahead of us.

Of all respondents/electors surveyed, 4% (unchanged) did not specifically  nominate a preference for any party.

The Daily Blog: Does Winston want to go home?

No Minister: Key softens stance on deal with Peters

Polity: The science of Key’s 2014 coalitions

The Dim Post: Winston Peters is not that unpopular