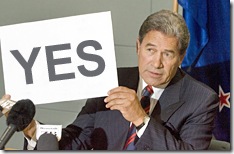 It is worth considering that if Winston was in a position to form a Government with National, would Winston ‘go home’ to National to seek the approval of the blue bloods of NZ that he has so desperately craved most of his political life, or would he join a Labour-Green-MANA coalition?

Seeing as NZ First have done all they can to frustrate Green ambitions, the idea that the Greens and NZ First could seriously see out a term as Government seem as likely as MANA and the Conservative Party are at coalition talks.

Throughout 2013, Winston has positioned NZ First to be the only option for National. He took out Peter Dunne, lavished criticism on the Maori Party and has gleefully tortured ACT at every twist and turn. These tactics haven’t been for the political sport of bear baiting, they have been embarked upon so that Key has no option but to consider NZ First. Winston would prefer to be the second largest fish in a pond of Government than a 5th wheel on the Left.

Winston’s quick rebuff of Key’s offer is acknowledgement by NZ First tacticians that the end game of joining National can not be telegraphed too early in the election year as it will rob NZ First of any protest change vote if people think the vote for NZ First is just a vote to prop up Key, so expect Winston to continue to publicly deride the offer. But if the difference between being the Government and not being the Government is Winston, expect Key to shower him in baubles.

Personally, I don’t think NZ First will get over 5% this election, their Lazarus resurrection in 2011 had more to do with Phil Goff’s failure to launch as a leader and the Tea Pot Tape fiasco, now it’s clear Key will talk to NZ First as an option, the anti-Government vote and change vote will go elsewhere.

If Winston does cross the 5% threshold, he will, after a long Prodigal Son journey, want to go home to National on his terms.