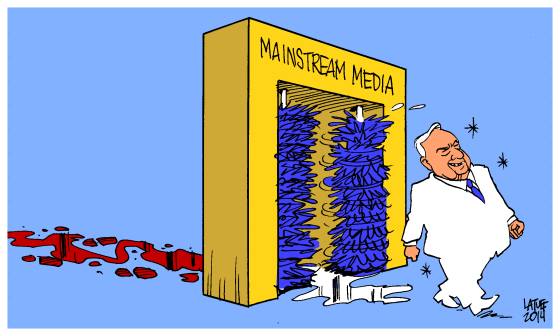 Plenty of sickening things happen every day but one of the worst this week has been the singing of Ariel Sharon’s praises at his funeral by Israeli politicians and an assortment of international butchers and war criminals such as former UK Prime Minister Tony Blair.

Our own Minister of Foreign Affairs Murray McCully was marginally less cringe-worthy saying Sharon had acted out of love of his country but at least acknowledged Sharon as “controversial” – a euphemism for bloody butcher in this case.

Sharon was one of the most vicious and gruesome political leaders from the 20th century. His most well-known crime was in engineering the massacre of thousands of Palestinian civilians in the Sabra and Shatila refugee camps in Lebanon in 1982.

Renowned journalist Robert Fisk described the scene after entering the camps following the massacre:
“What we found inside the Palestinian Shatila camp at ten o’clock on the morning of 18th September 1982 did not quite beggar description, although it would have been easier to re-tell in the cold prose of a medical examination … there were women lying in houses with their skirts torn up to their waists and their legs wide apart, children with their throats cut, rows of young men shot in the back after being lined up at an execution wall. There were babies – blackened babies because they had been slaughtered more than 24 hours earlier and their small bodies were already in a state of decomposition – tossed into the rubbish heaps alongside discarded US army ration tins, Israeli army medical equipment and empty bottles of whisky…”

One of Sharon’s sons spoke at his funeral saying how devastated Sharon was when one of his (Sharon’s) sons was killed in a firearms accident in the 1960s and how it broke his heart. It’s sickening to hear this when Sharon thought so little of the lives of Palestinian children. Small wonder his death is being celebrated by Palestinians.

Less well known is Sharon’s open advocacy of the theft of Palestinian land. As Foreign Minister he supported and encouraged new settlements – all Jewish-only and all illegal – on Palestinian land. He said Jewish settlers should occupy as much land as possible before any deal was reached with Palestinians. He said it like this:

“Everyone there should move, should run, should grab more hills, expand the territory. Everything that’s grabbed will be in our hands, everything that we don’t grab will be in their hands”.

Those words condemn him forever as a racist thug in the same mould as the likes of Mugabe.

He has been praised for his later decision to withdraw Israeli troops from Gaza. It was a gesture meant to appeal to international opinion but in the end was largely meaningless because Israel keeps the Palestinian people of Gaza in perpetual imprisonment with a brutal blockade of the sea, land and air.

History will show Sharon as someone who showed in stark relief the essentially racist nature of Zionism and how ultimately futile its pursuit will be.

Israel is an anachronism – a tiny state based on oppression and exploitation of Palestinian people and their resources.

Just as South Africa’s apartheid policies discriminated against “non-whites” so Israel has a plethora of laws which discriminate against Palestinians – even those who live in Israel and have Israeli citizenship.

“…they (Israel) took Israel away from the Arabs after the Arabs lived there for a thousand years. In that, I agree with them. Israel, like South Africa, is an apartheid state.”

Israel survives with its current structure as a racist, apartheid state only because it has massive US backing. It has no future beyond its usefulness to the US empire. It will not and cannot survive with its current setup. It was founded on, and is maintained by, terrorism against Palestinians. Even the UN resolution which agreed to the formation of Israel back in 1948 (absolutely unjust as it was) was explicit in saying Israel’s formation must not be at the expense of the Arab population already living in the area (Palestinians).

In international solidarity we are all Palestinians.