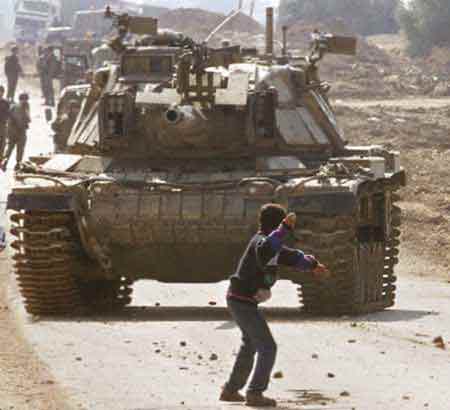 On hearing of the death of Ariel Sharon I thought about Gaza, where I visited in 2012 . The people of Gaza are trapped in a giant prison and Sharon was the one who locked the gates.

In 2005 , to much fanfare, Sharon declared that Israel would extract its settlers from Gaza – a gesture of peace the world would say. What many do not know is the cynical intent behind this move. Sharon dictated the terms of a settlement on the Palestinians when he was supposed to negotiate with them – they would have no say in the process, they would have no state of their own and Israel would continue expanding settlements in the West Bank. Israel still controls Gaza’s air and sea borders. The siege and successive invasions of Gaza ensued.

Even as Sharon was being buried in his farm built on the lands of the remains of the Palestinian village of Hooj, Israel was attacking Gaza resulting in the injury of 3-year old child.

General Sharon believed all resistance to the occupation was terrorism. And he used this to justify consistently applying collective punishment on the Palestinians. Before politics, he commanded the Israeli army’s Unit 101 in the 1950’s, which mainly operated in Gaza. Unit 101 was eventually disbanded due to its savage tactics and excessive cruelty to Palestinians.

I visited Gaza as part of the Kia Ora Gaza aid convoy. The reason Kiwis, and many others from around the world were bringing basic provisions to Gaza was because of Israels siege. Sharon’s legacy.

The stated aim of Israel’s blockade, imposed in 2007, was to apply pressure or sanctions to weaken the economy of Gaza and decrease support for the elected government Hamas. This amounts to collective punishment of Gaza’s civilians, and as such is a violation of international humanitarian law .

We visited hospitals , schools, universities, parliamentary grounds , bridges , all of which have been struck by Israeli F-16s over the past few years . The siege does not allow construction materials into Gaza. Our taxi driver told me after Operation Cast Lead in late 2008 – an Israeli invasion on Gaza that resulted in the loss of 1500 Palestian lives – people got back to normal life as soon as possible and started to rebuild their infrastructure the best they could with the resources they had. Like Kiwis, Gazans have a tradition of ingenuity. We saw how they have constructed critical pieces of machinery that aren’t allowed across the border using scrap metal or smuggled pieces from Egypt. The smuggling tunnels themselves , running from Egypt to Gaza underground, were dug without the use of modern construction equipment. These tunnels are currently being destroyed by the Egyptian military. Yousef, a student and translator for us , says nothing will stop Palestinians looking after their own ” if the food doesn’t come from across the border , we will just dig it up from the ground” .

At Shufa hospital , the largest in Gaza, we met Dr Amman. During Operation Cast Lead , he came across many instances in his hospital where patients were burned by white phosphorus, dropped from the sky. There were weapons used by Israel that resulted in injuries the doctors did not understand, nor know how to treat, which devastated him as a doctor. The hospital was bombed in 2008 and has now been rebuilt. At the emergency department, we walk past shelves of expired medicines . “The ban on medicines is the worst crime of all” he says “we can not help the sick , even those with treatable illnesses.”

Jabileyeh refugee camp borders Israel and is the area worst hit during bombardments. We are told that earlier this year 8 civilians were killed in one such incident. Buildings are either rubble or pockmarked with bullet holes . Overcrowding was a serious problem, some of the homes we visited contained up to 25 people living in two basic rooms. Black outs, caused by Israel not allowing enough electricity into Gaza, meant those two basic rooms after dark were often pitch black. Even for those few moments in those rooms I felt scared and vulnerable ,I couldn’t imagine what it would be like to spend so much time in pure darkness. The poverty is intense , a woman approached me with her baby pleading and crying for money.
Everywhere we went we were followed by curious children, they took great joy in asking us questions and welcoming us to Gaza. Parents here are not concerned to have their children wander the streets as they please. ‘After all these children have seen and experienced what more is there for a parent to be afraid of?’ they say.

One of the leaders of the Hamas government Dr Mahmoud al Zahhar told us “if we lost our dignity we’d be our own enemy’. Perhaps that is the spirit that has seen the people of Gaza return and build even in the face of attacks and unimaginable adversity.

They don’t need us to do anything but help tear down the gates Sharon built.