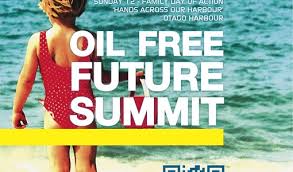 This past Saturday in Dunedin, as part of Oil Free Otago’s ‘Oil Free Future Summit’, more than 200 concerned citizens gathered raise red flags about the continued expansion of extraction, and discuss alternatives that can buy us some time on this beautiful planet. Among us were Professors and academics (of physics, economics and social geography), artists, activists and policy makers (local and national). Despite eternal optimist Dr Bob Lloyd’s bleak hard data, the mood felt positive. There were struggles that needed to be taken up, and enough of them were winnable to make the attempt worthwhile. The two strongest recurring themes were; the idea that climate change, in all its glory, is but a symptom of our greater economic problems, and Change The Government.

What kind of leadership in this area can we expect of a different government, potentially before Christmas this year? In recent years, both the Greens and Labour have campaigned hard on economic inequality, with a particular focus on child poverty. It is a disgrace that metrics, let alone mitigation methods, remain off the National government’s Social Development radar. Yesterday, immediate-past-Deputy Leader Grant Robertson said his focus was on “getting rid of this government, and replacing it with one that will not accept poverty in our country – and will have measures and targets to get rid of it.” This is certainly a noble goal, but what kind of world do Labour want to help lift our society up into?

We have a moral obligation to act in the best interests not just of ourselves but those who come after us. It’s selfish and short sighted to demand I rob my unborn grandchildren to prop up dying and deadly industries, because those in a position to end the lolly scramble lack the courage and conviction to do so. The oil and gas industry already know about 3-5 as much hydrocarbon than we can burn before the warming of the planet hits 2deg C. The longer we take to address this issue seriously, the longer the odds for the survival of our species as we know it. North America snap freezing in the winter and Australia burning in the summer are just preludes to more, and more severe, weather if we continue to live a life of Business As Usual. For too long we have passed the buck down the generational line, to the point where now the cliff is in sight. We can choose to accelerate off the precipice, or slow down before it is too late.

Labour Deputy Leader David Parker is supportive of existing extraction arrangements. Anti-environmental bully boy and Labour’s economic development spokesperson Shane Jones is a cheerleader. Mr Robertson has been reported as saying that Labour aren’t against deep sea oil drilling “in principle”. Yes, it is the neoliberal fantasy of perpetual growth – measured in shareholder dividends and fueled by society’s obliging routines of perpetual consumption – that makes this activity viable and desirable. Is it possible Labour are proposing a form of Treacle Up Economics? If the bumps in the neoliberal consensus can be ironed out with a bit of state intervention, top tier taxation and stricter safety regimes, the conditions for hydrocarbon hunts will make them untenable? That is one hell of a Trojan Horse on their front bench, if that is the case.

This morning, Mike Treen wrote that “We need a new social and political movement that tackles inequality. But such a movement has to understand that capitalism and inequality are two sides of the same coin.” I would like to add that social justice and environmental protection, concerns for which are the main reasons that politicised me in the first place, have a similar relationship. Resource rich nations, trampled on and exploited in the advancement of European Empires, left to scratch out a living in toxic wastelands. Small subsistence communities consumed by dam construction or sea level rise. People who did the least to cause the problems suffer first and worst.

In the short to mid term, a handful of the planet’s expanding population will continue to do very well for themselves. Their financial gains will be built on the backs of the poor and blameless, discrediting science and pushing treacle down economics. The reality is that this is the last great resource scramble of the industrial age, and the frontiersmen are building arks of money. When the shit hits the fan, those with the most will survive the longest, and they’re happy to watch the rest of us drown (literally and figuratively) along the way. The gap between the rich and the poor won’t be content until it has stretched out to a life and death scenario.

Socio-economic inequality and environmental instability need to be addressed in concert for any meaningful change to be achieved, now and into the future. The way we manage our economy and our environment need to rethought together. I urge all those within the Labour whanau, and I know they are many, to get this message across to their leadership. If they can’t get the message through, our only hope is for a strong Green voice alongside them in government, reminding them every step of the way.