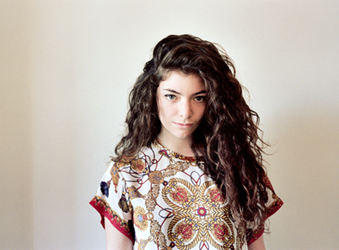 AS COVERS GO, Pentatonix’s “Royals” is pretty damn good. That’s not only because the five young Americans in this hit a capella group are all outstanding singers. As is so often the case when something familiar is represented to us from an unfamiliar source, Lorde’s song emerges from the mouths of Pentatonix with a new clarity.

The cover version made me much more aware of the extraordinary tension that exists between the song’s two major lyrical components: the quick-fire inventory of top-shelf bling (“diamonds on your timepiece”) and brazen display (“tigers on a gold leash”) identifying success and celebrity; and the songwriter’s defiant chorus of rejection.

And we’ll never be royals (royals)

It don’t run in our blood

That kind of lux just ain’t for us, we crave a different kind of buzz

Tension, and an unshakeable sense of ambiguity: Lorde may foreswear “post code envy” and insist that she and her friends, counting their dollars on the train to the party, are “fine” with the fact that they don’t “come from money”; but that doesn’t mean they’re not all “driving Cadillacs” in their dreams.

Pentatonix, themselves, are a powerful expression of this ambiguity. The core of the group, Scott Hoying, Kristie Maldonaldo and Mitch Grassi, all attended Martin High School in Arlington, Texas. Situated between Dallas and Fort Worth, Arlington was, for most of its history, a sleepy and unremarkable little town. In the years following World War II, however, Arlington became a manufacturing-based “boomburb” – it’s population exploding from 4,000 in 1941 to 374,000 in 2011. If you craved a different kind of buzz in Arlington, then all roads pointed North.

It was Hoying who built the high-school trio into a professional quintet. Betting that he and his buddies could do well in The Sing-Off – NBC’s reality-cum-talent TV show featuring a capella groups – he expanded the group to include the talented bass, Avriel (Avi) Kaplan, and Kevin Olusola, whose beatbox/cello solo performance had gone viral on YouTube. The five, calling themselves (at Olusola’s suggestion) “Pentatonix”, after the pentatonic musical scale, went on to win The Sing Off’s third (2011) season.

By 2012, Pentatonix was in Los Angeles, hustling for a recording contract and determined to bring pop a capella into the mainstream.

Meanwhile, back on Auckland’s North Shore, the only slightly younger Ella Yelich-O’Connor was also winning talent quests and attracting the attention of record companies. Raised in a professional middle-class family who positively encouraged her to crave a different kind of buzz to that of most North Shore teenagers, Yelich-O’Connor won her intermediate school talent quest at the age of 12. One year later she had been talent-spotted by Universal and was writing her own songs.

In 2013, Yelich-O’Connor, now going by the stage-name “Lorde”, told The Listener: “I started writing songs when I was 13 or 14, because I’ve always been a huge reader. My mum’s a poet and we’ve always had so many books, and that’s always been a big thing for me, arguably more so than music.”

It’s an admission that raises a number of interesting questions about the song that has made Lorde the toast of the music recording industry and put her at the top of the American and British pop charts.

Yelich-O’Connor has a poet’s eye and a novelist’s imagination, and in “Royals” she puts both to good use. Certainly, the song should not be considered autobiographical. Takapuna, where she grew up, is located many kilometres away from the “torn up” suburbs of Auckland, and is by no stretch of the imagination an address to be ashamed of.

But then, Yelich-O’Connor’s primary gaze has always been directed up – not down. Her fascination, reflected in the name she chose, “Lorde”, has, by her own admission, been with those at the summit of the social pyramid: “ever since I was a little kid, I have been really into royals and aristocracy”.

A careful reading of “Royals” bears this out, for at the heart of the song there lies, not a plea for social equality, but for a very different and better kind of aristocracy: one grounded not in the narcissism of bling and vulgar ostentation, but in the authenticity of one’s emotional and aesthetic experiences, and the purity of one’s ambitions.

The director of Pentatonix video of “Royals” draws our attention to this aspect of the song by dressing his talent in flashy outfits and bedecking them with bling – setting up an ironic disparity between the song and the singers. It is only at the end of the video that the five performers are redeemed – delivering their last, extraordinary harmonies as authentic artists, dressed in ordinary street attire.

The same theme underscores Yelich-O’Connor’s very public contretemps with other female artists. These have all been about redefining what it means to be famous: about what sort of person the successful artist should strive to become and what sort of values she should be trying to promote.

This heady – almost Nietzschean – brew is a remarkable achievement for a young woman of just 16 years. The shifts within the song, from the vulnerable first person, to the security of the collective “we”, reflecting, perhaps, just how difficult the songwriter found it to keep her central idea on track.

Indeed, Yelich-O’Connor’s shifts into the second person “you can call me queen bee” suggest that, at its simplest, “Royals” is about two young people in love; and that it is this, the oldest and most profound of human experiences, that exposes most tellingly the shallow narcissism of celebrity culture.

However one chooses to read it, “Royals” has rightfully become an anthem for its author’s generation. Within its lines you will find the Gen Y hunger for fame and recognition, as well as their worrying familiarity with all the talismans of conventional success. But also present in “Royals” is the Millennials’ yearning to transcend the soulless materiality of twenty-first century life; to be someone or do something capable of making the world stop in its tracks and recall what it is to be human.

Pentatonix, with their youth, their vitality and their extraordinary voices are potent exemplars of that power; as is Ella Yelich-O’Connor, the young New Zealand woman who put her words in their mouths.