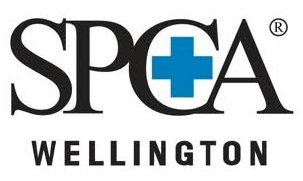 NZ, Wellington, 22 December 2013 – On Sunday 22 December, it was moving day for the Society for the Prevention of Cruelty to Animals (SPCA),

They had outgrown their cramped premises at Riddiford Street, Newtown, in suburban Wellington and were moving to more spacious ‘digs’ at the old “Fever Hospital” in Mt Victoria.

The old premises had once upon a time been a hospital for TB sufferers; influenza patients;  and other infectious diseases. The buildings are  listed with a Category 2 classification  with the Historic Places Trust.

Having been earthquake strengthened and refurbished by Wellington City Council, the premises were occupied by it’s new two and four-legged residents in a mass move, one sunny Saturday afternoon.

Animals were led out, some walking under their own power,

Others were assisted out, by their human companions,

Several SPCA vehicles were on hand to transport those that would be driven to their new home, about two kilometres away,

Strangely enough, few of the animals seemed stressed or outwardly worried and appeared to be content with the goings-on around them,

The Bunny Family were not forgotten, gently helped into their carry-cages for the move,

One good thing about transporting animals – you won’t hear “are we there yet?’ umpteen dozen times.

The puppies and mature dogs were brought out, each on a leash, and each guided and cared for by their respective companion human,

This wee chap wasn’t so keen on the shift, and was given the personalised, deluxe service,

Once outside, they were keen and eager to hit the road,

As the vehicles filled, the courtyard became an assembly point for Human and companion animal alike that would walk the journey,

Some were more exuberant than others, at hitting the road,

And some just chilled, enjoying the afternoon summer sun,

A final strategy conference amongst the group…

… and the march of puppies began,

With the water-bearer close by, for anyone needing a quick drink of  refreshing water along the way,

The procession made it’s way down the long drive, out toward the road. Companion animals seemed to lead the way for their Human friends,

And finally out onto the road, there was something of a “Biblical” nature as Human and animal headed off to their “Promised Land“,

Humans, meanwhile, busied themselves with lining up the SPCA vehicles, also ready for the final move. Somewhere, in my head, I could hear a certain musical tune, and a deep, American voice, announcing,

“This here’s the Rubber Duck, I think we got ourselves a con-voy!”

The marchers, moving steadily up Constable Street. The puppies and dogs had probably not had such a long walk for ages,

Halfway to their destination, their new homes awaited.

To be concluded at: March of the Puppies – It’s “moving day” for Wellington’s SPCA!  (part rua)