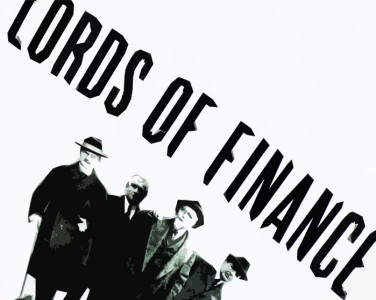 This week I have been reading Lords of Finance (Liaquat Ahamed, 2009), subtitled “1929, The Great Depression, and the bankers who broke the world”. The book spans the period from 1914, and the real villain of the piece is the monetary gold standard, rather than the four central bankers who are the very human protagonists of this story.

Indeed Ahamed tells a sympathetic tale about how the best financial brains in the world had no real idea how international capitalism actually worked, but nevertheless they (and everyone else) believed that they could manage the system by following a simple set of rules.

My comment here relates to the gold standard and its modern alternative (the system of floating exchange rates), and how both are self-defeating rather than self-regulating.

Money is both a thing that each of us thinks about most days, and a social technology that almost nobody understands. Money is so linked, and in different ways, to our actions, interests and values. It is hard to think in a disinterested (ie detached) way about money.

Our prevailing view of money dates back to the philosopher economists of the 1690s to the 1780s: especially John Locke, David Hume, and Adam Smith. Theirs was a simplistic view; that money is either gold or silver, and that the value of a thaler or a pound or a shilling was determined by how much gold or silver was in a coin of that denomination.

David Hume made a number of significant comments about money. He noted, correctly, that it was essentially the lubricant of commence, that works by circulating (and does not work when hoarded). He also suggested that money was a “veil”, meaning that it didn’t matter whether there was much money or little money in the world, because prices would always adjust to how much money there was. These two beliefs were somewhat contradictory, because we all understand that if a car has insufficient lubricant, then it will not go very far.

Hume described the putative self-regulating economic mechanism (like a thermostat) of the gold-standard, known as the “price-specie-flow mechanism”. Payments between countries would be made in gold coin or bullion. Countries with trade surpluses would accumulate gold, and countries with trade deficits would face diminished gold reserves. Inflation would be automatic in the surplus countries, and price deflation would be automatic in the deficit countries.

Neither system can work in its pure form, in part because individual countries’ authorities resist the key mechanisms: inflation; deflation; currency appreciation; currency depreciation. (While we note that Germany is not exactly promoting inflation as its part of resolving the Euro crisis, Japan is a surplus country that today is promoting inflation.) The gold standard also never worked because inflation and deflation are not automatic consequences of a country having more or less money.

The gold-standard, as a mechanism, was rescued in the nineteenth century by bankers. Debt is absent from the philosopher-economist version. Debt is reality, however. Humans tend to lend rather than spend their accumulations; a matter of money-love unforeseen by the economists.

The gold standard ideal morphed into a variant system whereby gold need not flow at all; rather gold would be lent back to deficit countries by surplus countries.

The debt-variant gold standard had no automatic mechanism to resolve the debt accumulations. Enter the central bank and the central banker. The new lords of banking would be required to set interest rates according to the following rule: interest rates would be raised in deficit countries (creating a “dear-money” environment) and would be reduced in surplus countries (creating a “cheap-money” environment). People in the cheap-money countries would be incentivised to save less, borrow more and spend more. People in the indebted dear-money countries would be incentivised to save more, borrow less and spend less. Thus the debt imbalances arising from unbalanced trade could be resolved.

It was widely believed that, in the heyday of the gold standard (1870-1914) this system worked as well as any system involving humans can possibly work, and that it was the single most important facilitator of world economic growth. So, after World War I, the big challenge of the 1920s was to reinstate this system. The result of this misplaced endeavour was the Great Depression. The world’s gold became concentrated in two countries – the USA and France – and neither had any intention of running the large trade deficits that the system required of them.

The gold standard came to an end in 1971, but, since the 1980s, the central banks of the world have been playing essentially the same game as they played in the 1920s. Today’s lords of finance manage interest rates in ways that, in practice, exacerbate rather than resolve the debt imbalances between countries. Thus the world is awash with financial assets (ie debt), whereas the economic model says that deficit countries like New Zealand and the United Kingdom should have depreciating currencies, and surplus countries like China and Germany should have appreciating currencies.

The system today is as unstable and as destabilising as the gold-standard system was in the 1920s. We saw a hint of that instability in the Global Financial Crisis of 2008. But only a hint.

The reality is that, whatever the global monetary system, capitalism must always feature endemic lenders and endemic borrowers, and that imbalances simply grow until either a debt crisis or a debt amnesty takes place. When inequality and miserliness are pervasive, the pace of destabilisation tends to be much faster than when incomes are more equally distributed.

Our financial lords – the men and woman whose jobs are to promote systemic balance in the global financial system – need to attend more to the actual problem of inequality, and less to the hypothetical problem of inflation. Indeed inflation is sometimes part of the solution.