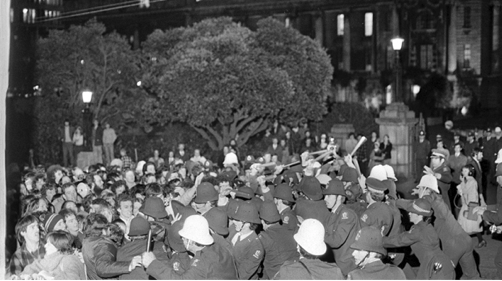 Michelle A’Court wrote this piece about the 1981 Springbok tour – her personal experience of one of the defining moments of our modern (albeit short) history,

Clearly, the Tour and surrounding events made a lasting impression on her – as it did with so many other New Zealanders. In her piece, she made this subtle reference to Key’s recent brain-fade about his own position on the Tour,

In 1981, John Key and I were both 20-year-old university students – he at Canterbury, me at Victoria.

These were the years before student loans, when we studied free and bursaries covered tuition and most of our living costs.

Without a terrifying debt waiting for us at graduation, many of us engaged with a broader education than just our prescribed courses.

Student media, drama, political activism . . . I often wonder if the shift to student loans was as much about social repercussions as fiscal concerns.

My memories of the 1981 Springbok tour are vivid.

The photo in the story is one of hundreds – thousands – that were taken of a momentous event that rocked this nation to it’s core. For many, the wounds have only just healed, as with former policeman and Red Squad leader, Ross Meurant,

Last night, Mr Meurant told the crowd, who had permission to be on the playing field for the service, that Mandela had been an “outstanding statesman” and “one of the most precious and remarkable gifts ever bestowed to mankind”.

Mr Meurant, who hadn’t been back to the stadium since the infamous protest, said the events of the tour had changed him forever. “The greatest journey has been my personal development, from deep in the forest of police culture and distorted reality, to the ability to see where I was wrong – and where the system fails us,” he said.

For this blogger, the 1981 Tour was also a pivotal moment in my life. It marked the moment when I realised that my heretofore right-wing views were horribly wrong and that I had had a simplistic, naive, and distorted view of the world.

There had been other previous instances, such as Muldoon’s (unsuccessful) determination to fell the country’s last remaining native forests at Pureora and elsewhere. Or the United States toppling left-wing governments and supporting the installation of right-wing – often military – dictatorships. All while mouthing platitudes about being the standard bearer for democracy for the world.

The person that I was, vanished, as I watched New Zealanders being batoned and bloodied by police – something out of Roger Donaldson’s “Sleeping Dogs” movie, that had been released only four years previously. The movie  (based on C.K. Stead’s novel, “Smith Dream“) was eerily and frighteningly prophetic.

So it beggars belief that our current Prime Minister claims that he cannot recall his position on the Tour. As far back as 2008, when he was asked by a TV  journalist,

Which is odd, as politics was passionately discussed in the Key household, with John Key being unashamedly pro-Muldoon and pro-National,

Sue also remembers fiery debates between her mother and brother. “Mum was fiercely Labour and John was fiercely for [National leader Sir Rob] Muldoon,” says Sue. “I used to take the middle ground, they’d be on either side of the dinner table just about with knives out on each other as to who was right.” So, even at a young age, he had gravitated to National, in spite of his mother’s left leanings.

At one point in his childhood, Key gave his mother a National Party rosette for her birthday, to wind her up. She kept it until she died.

One of his fellow University students, Paul Commons, stated,

Had Key and his family been apolitical and utterly dis-interested in current affairs, one could accept Dear Leader’s statement that “I can’t even remember … 1981, I was 20 … ah … I don’t really know. I didn’t really have a strong feeling on it at the time”.

But not when he and his family were politically conscious and Key had already formed a strong preference for the National Party.

If Key genuinely cannot recall one of the most violent and divisive issues of the latter part of the 20th Century – then that suggests he is suffering from some form of early dementia. In which case he is not fit to be Prime Minister, much less hold office of any description. He should be seeking urgent medical intervention.

Or, as more likely, Key is simply lying. Again. Not for the first time, Key has resorted to mendacity to get out of a sticky situation he is unable to cope with.

Let’s be clear here – the Springbok Tour affected the collective psyche of the  entire country.

On a personal level, it changed my own political compass 180 degrees so utterly and so radically, that I would barely recognise myself thirtythree years ago.

But Key evidently can’t remember any of it.

The article by Ms A’Court also featured an associated  poll which asked people which side of the issue they were on,

It is interesting to note the the Pro-Tour and Anti-Tour response is roughly equal – reflecting the same situation which existed back in 1981.