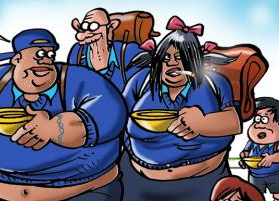 This item was Stuff (the Fairfax news media) caught my attention,

Having lived briefly in Australia, I can vouch for the racist attitude that many Australians have toward migrants. New Zealanders are no exception, and also suffer the wrath of prejudice from some of our Aussie cuzzies.

Which is ironic, as we ourselves have a long way to go, to examine our own racist attitudes and how desperately we (or some of us) cling to prejudice to preserve our place in society’s hierarchy.

Those who did not see Nisbet’s cartoons are racist and offensive could be placed in two broad (sometimes over-lapping?); those who are ordinary racists and who saw the cartoons as a validation of their views; and the Uninformed who – whilst not consciously racist – probably didn’t recognise the nature of the images and the messages they were conveying. They simply had no political consciousness that could *switch on* a light-bulb in their minds and instantly recognise what Nibet’s cartoons represented.

And really, any one of us can fall into that particular trap on occassion. An image that might seem innocuous to one person might be utterly reprehensible to another.

The difference between the racist and the uninformed is that the latter can learn and when understanding comes, the *lightswitch* comes on.

For a cartoonist to be truly subversive, their art should express  critical attention on society’s unpleasant prejudices; irrational contradictions; and those who exploit  traditions to maintain positions of power. These are the things that demand to be challenged.

Nisbet’s cartoons did not challenged popular prejudices – they reinforced and gave credence to them. It gave “comfort to the enemy” – the enemy being ignorance and bigotry. It reinforced rather than scrutinised or challenged.

The cartoonist below, on the other hand, challenged the knee-jerk mindlessness of parroted bigotry,

The unknown (American?) creator of the above cartoon subverted the “logic” of the racist, showing it to be what is truly is; untenable when taken to it’s ultimate, ludicrous conclusion.

Returning to the Stuff article above, it’s not often that white New Zealanders get a taste of what racism feels like. Experiencing it at the hands of others suddenly widens our perception as we find ourselves walking in someone elses’ shoes.