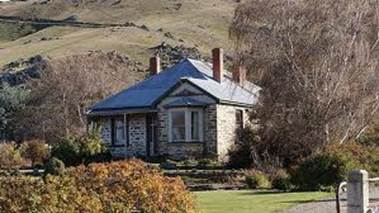 THE BLACK BARN VINEYARD hosts a “Growers’ Market” every Saturday morning throughout the Hawkes Bay summer. It’s a bustling affair. Late model motor vehicles line the access road and pack the parking lots while, amidst the carefully tended rows of grape vines, and screened by a leafy circle of trees, the middle classes of Napier and Hastings amble and gape, sample and buy a rich variety of rustic wares.

It’s urban-dwelling customer-base notwithstanding, the “Growers’ Market” presents a thoroughly bucolic scene. This is New Zealand the way the securely employed and generously remunerated half of the population likes to think of itself. As they carry their jams and pickles, cured venison and organic vegetables, back to their Range Rovers and BMWs they bear with them also the myth of “heartland” New Zealand.

This is the New Zealand featured every Thursday in Jim Mora’s “Our Place” Afternoons segment. It’s a world of picturesque villages and isolated towns; of unfailing hospitality and cultural homogeneity. A world as unhurried and reliable as a slow cooker in a country kitchen.

And even though the vast majority of those who hold tightly to this “heartland” myth live in New Zealand’s big cities, they are not in the least fazed by the contradiction. Because, in the breast of every Black Barn visitor lies the dream of one day escaping the fast pace and brittle relationships of modern urban living and purchasing (at an amazingly reasonable price!) a fine old property set among lawns and trees at a location if not actually in the countryside, then very close to it.

For these folk, life in the city is endured (in much the same way as they endured life in a student flat) as a necessary exercise in delayed gratification; something to put up with en route to somewhere much, much better.

Or, as Gerry Rafferty put it in Baker Street:

He’s got this dream about buyin’ some land
He’s gonna give up the booze and the one night stands
And then he’ll settle down in this quiet little town
And forget about everything.

“Forget about everything”: the politics of these aspiring Heartlanders is captured to perfection in that single line. Because the retreat to the heartland is in almost every case also a retreat from the broader civic responsibilities of contemporary citizenship. Though they might not admit it, the huge allure of the countryside is its distance from the moral and political challenges of the cities. The walls of Havelock North, Greytown and Martinborough may be constructed of Agapanthus, flowering Azaleas and Rhododendrons – but they are walls nonetheless.

And if the middle-classes are only “passing through” the cities: settling in their leafy suburbs only for as long as it takes them to amass sufficient capital to embrace the true “leafiness” of the countryside; then interesting them in improving the city and turning it into a liveable environment for those without the capital to escape its miseries is going to be an especially difficult task.

Dramatically increasing its difficulty is the willingness of the National Party to cover the Heartlanders’ retreat.

Historically, National has always been the party of the countryside and the leafy suburbs: the political voice of all those who instinctively embrace rural “virtue” and eschew urban “vice”. For these New Zealanders, the cities have always been seen as a breeding ground for dangerous classes and dangerous ideas.

And the proletarian animal,

product of perversion and source of profit,

with a net paid circulation of a million,

and many unsold, or lying about the streets

bearing the marks of boot protectors;

of a ‘belief in the essential goodness of human nature’.

The middle-classes have never been great believers in “the essential goodness of human nature”. Theirs is a strange, Lamarckian faith in which the benefits of fresh air and sunlight, parental wealth and a well-ordered middle-class existence are passed down as heritable genetic drivers. The same claim is made (albeit negatively reversed) about those raised in poverty and deprivation.

In Michael Laws’ version of Lamarckian sociology, the viciousness and rapaciousness of one deprived generation is inevitably passed down to the next. Hence his insistence that the rapidly expanding (and incorrigibly “feral”) underclass be legally prevented from reproducing.

Those who are perplexed by the current popularity of “zombie” movies and television series need wonder no longer. For those raised in the morally inert climate of neoliberal economics, the poor’s resemblance to the flesh-eating monster is indisputable. The ideological leap from “Welfare State” to “Zombie Nation” is not a large one. Just substitute “the taxpayers’ dollars” for “human flesh” and you’re there.

Though they would undoubtedly deny it if you suggested to the people leaving the Black Barn Vineyard’s Growers’ Market every Saturday morning that, in their heart-of-hearts, they see the National Party leader, John Key, as their Fearless Zombie Slayer, I strongly suspect that they do. Who else can realistically promise to protect their flesh/incomes from being continually garnished to satisfy the zombies’/welfare beneficiaries’ insatiable appetite? Who is better placed, through rampant house-price inflation, to keep the poor as far from the middle-classes’ front doors as possible? Whose policies will more effectively assist the middle-classes’ acquire the tax-free capital-gains necessary to escape the zombie-infested cities for the zombie-free zones of Heartland New Zealand?

Equating the poor with zombies, and rehearsing Michael Laws’ claim that “intergenerational poverty” and its resulting “feral underclass” can only be eliminated by adopting the most extreme eugenic methods, may seem a very strange point to conclude this discussion – having started it in a bucolic Hawkes Bay vineyard.

But how else should we explain the fact that even though the Black Barn Growers’ Market is only a few minutes’ drive from the Hasting’s suburb of Flaxmere, very, very few (if any) of its mostly poor and mostly Maori residents will ever be found sampling and/or purchasing the stall-holders’ products? The Saturday-morning drive to the market is a middle-class class ritual, at whose heart lies a desperate need to retreat and escape from the consequences of their “inherited” social advantages.

The “Heartland Myth” is about middle-class people running away from their responsibilities. It is about them seeking a refuge from the complex living rebuke of poverty and social injustice. It is about their collective unwillingness to recognise “the essential goodness of human nature” and the terrible cost of evading its most basic obligations.