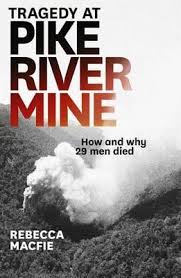 If you want a pleasant read over the Xmas period stop reading this blog now. And, on no account should you pick up Rebecca MacFie`s `Tragedy at Pike River Mine:How and why 29 men died`. This book will certainly spoil your Xmas festivities.

Think of the miners,contractors and their families, just for a moment. Then, think of those NZ Oil and Gas directors and Pike River managers who have escaped legal culpability. Good cheer for some and not others it would seem.

After reading MacFie`s book I must quibble about the title. It should read `Pike River Manslaughter`. The entire project was flawed from the start. The key driver was Gordon Ward, a NZ Oil and Gas (NZOG) accountant from the late 1980s and finance manager from the late 1990s. He became director of Pike River Ltd. in July 2006 and Chief executive in January 2007. Ward had no coal mining background yet the Pike River project became known as `Gordon`s baby`. He predicted that a Pike river coal mine would be extremely productive and quickly profitable. The May 2007 prospectus which accompanied the initial share offering described the Paparoa coal seam as having `low to moderate gas content`.

MacFie demonstrates firstly, that none of these assertions were true and, secondly, that countervailing evidence was systematically ignored. Ward was eventually forced to resign his Director and Chief Executive roles at Pike River (December 2006). By then though, it was too late, the Pike River mine was a done deal, at least until the first, thunderous, methane explosion of November 2010.

As MacFie recounts this should never have happened, early warnings from experts were marginalised or ridiculed. Geologist Jane Newman had been familiar with the geological structure of the Paparoa ranges and Pike Field since 1980. She was originally involved in the drawing of coal samples as part of the Canterbury Coal Research Group. She concluded that the rock and coal layers were geologically complex and riven with faults. Further analysis was required to properly ascertain the risks of building and operating a mine at Pike River, not the advice that Pike River Coal and NZ Oil and Gas wanted to hear.

During the 1980s and early 90s Murray Cave managed the NZ Coal Resources Survey from within the Ministry of Energy. The survey included detailed studies of West Coast coalfields. Cave criticised Pike for not providing information on the methane component of the proposed coal seam, a potentially lethal oversight. Mining expert Harry Bell had over 20 years experience working underground. He was Deputy at Strongman mine and had first hand disaster experience. When Strongman exploded in 1967 he lead the second team of Miners Rescue Service Volunteers underground to recover bodies. From 1990 to 1992 Bell was chief of New Zealand`s Mining Inspectorate, an organisation which was deregulated and dismembered under the Bolger government. In mid 2006 Pike River Coal Ltd`s management team asked him to oversee the mining of coal samples from near the headwaters of Pike stream. He foresaw difficulties in extraction and in the separation of coking coal from high sulphur coal. Bell subsequently advised friends not to invest in the initial share offering. At that point NZ Oil and Gas held 31 percent of Pike River Limited. As problems mounted NZOG sought a way out, to no avail. As MacFie notes

`Pike represented about one-third of NZOG`s market capitalisation in early 2010; it was simply too big to let fail`.

Yet,throughout this period Pike River management including general manager Peter Whittall, spun a rosy tale to mining families, Greymouth communities and the country at large. Things were fine, just a few machinery glitches, major volumes of high quality coking coal were being extracted, worker morale was high. MacFie outlines the scale and senselessness of such delusions in a critical chapter entitled `Marching To Calamity`. In July 2010 Japanese hydro-mining expert Masaoki Nishioka arrived at Pike River (although he had given advice before then). Hydro-mining pulls off large amounts of coal very quickly but can release surges of methane. Thus, high methane coal should be hydro mined with appropriate infrastructure, equipment and care. None of this applied at Pike River and Masaoki was deeply concerned. Ventilation was inadequate, the major fan and its back-up worked intermittently, coalface methane gas was common and w orst of all, there was no emergency exit. Masaoki left Pike River in October fearful that the mine could explode at any time.

The attitude of Pike River management was criminal in all but name. They induced and pressured workers to work longer shifts and produce more coal. Bonuses were offered if the hydro-mining system could be quickly established (so much for checking the equipment).

Meanwhile, above ground, management PR kept local communities onside (despite the qualms of experienced miners, working and retired). In short, Pike River mine should have been closed up well before the November 19 explosion. Even then, the families were lied to about the plight of the men underground. Internet evidence of a flaming ventilator shaft indicated, even to the Prime Minister, that rescue hopes were not as likely as Peter Whittall was suggesting.

So, what lessons can we draw. Well clearly, dismantling the Mining Inspectorate was a stupid idea, deregulation of this kind endangers lives just as it did at Cave creek when faulty carpenter work contributed to the collapse of a bush lookout populated by children. Pike management of course, failed the workers, contractors and their families, but there is union culpability here too. As MacFie argues the union representing mineworkers, the Engineering, Printing and Manufacturing Union (EPMU) could have encouraged strikes, pickets and bans over safety yet nothing eventuated. Health and safety at coalmines can be likened to a three legged stool. The Mining Inspectorate (plus other government departments), Mine management and the Union must each be of equal strength so they can work together. This was the lesson learned from Strongman and earlier mining disasters, `free market` deregulation not only unlearnt this lesson, it destroyed the country`s institutional memory. It should now be obvious that the business model of shareholder driven corporations is fundamentally at odds with safe mining practices, a state monitored model with appropriate regulatory safeguards is required. If this doesn`t eventuate corporate elites will continue to walk away from catastrophes that they themselves have created.

Don`t expect this government to remedy the situation, they are blindly leading us to our next catastrophe – deep sea oil drilling anyone?