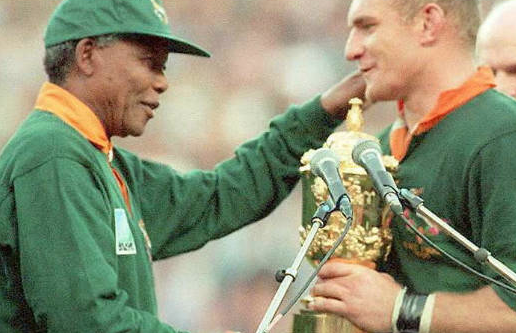 I may be a lot younger than John Key, but I can remember the Tour well. As a seven year-old, I was too young to comprehend what was going on, much less hold any political views. But being born into a rugby-loving family and living in the neighbourhood of Eden Park, it was impossible, even at that age, to escape the fact that something extraordinary was going on. The images of protesters confronting police on Sandringham Road and the buzz of a protest aeroplane flying low over our house during the third test match are permanently etched into my memory.

I remember watching that final match with my father. Like so many New Zealanders who watched the game that day, he was no fan of apartheid, but he had convinced himself that politics and sport need not mix. He knew in his head that the tour should never have taken place, but his heart also longed for rugby battle with the old rival and, as with half the nation, it was the rugby heart that won out.

Fourteen years later came another historic encounter with the mighty Springboks. By 1995, apartheid had ended and to the pride of South Africans and to the joy of millions of spectators across the world, Nelson Mandela played gracious host at the Rugby World Cup final. But, like my father 14 years earlier, for me it was only the rugby that mattered on that day. South Africa may have undergone a powerful transformation, but in rugby terms, it was my beloved All Blacks versus our arch enemy. The only history I was concerned with was the fact that in 1991, we had somehow lost our grip on an all-important trophy that we considered to be ours by right.

Against a weaker opponent, against a dazzling run of form, against all rugby comprehension, the All Blacks lost that day. We blamed food poisoning, we blamed the ref, we even shook our fists in moral outrage against those apartheid-loving Afrikaners of the South African rugby board. But, our post-match shock missed the point entirely. We weren’t just playing against 15 South African rugby players, but against the forces of history and one of the greatest political leaders the world has ever seen. We didn’t stand a chance.

It took me a long time to get over that loss. For years, I looked back at it in purely rugby terms and my heart still ached. To be fair on myself, I wasn’t the only one. In fact, it seems to be one of those moments that has only grown in importance over time. Only years later – just like with the Tour – has the importance of the rugby been shaded by political meaning. Only looking back, is it possible to appreciate the symbolic importance of what Mandela did; uniting black and white in celebration of a sport that was the bastion of apartheid, and against an opponent, New Zealand, that had believed that the oppression of one race by another was not worth missing a rugby match over. And it is only now, after the death of the great man, that I fully comprehend that on that day in 1995, he was not only offering his gracious forgiveness to white South Africa, but also to the All Blacks who had so wronged him.

So, by way of my own personal tribute to you, Nelson Mandela, let me say that I am glad South Africa won the 1995 Rugby World Cup. You were a mightier opponent and a more deserving victor than the All Blacks ever could have been. History remembers you, not Jonah Lomu, as the biggest star in that stadium and that is as it should be. May you rest in peace, great man, and may your historical light shine ever more brightly than any rugby match.