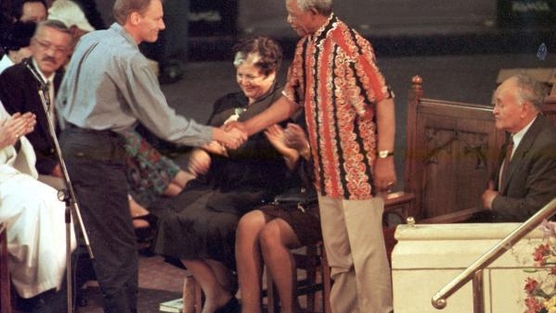 Nelson Mandela was a great man – a towering political figure. He was an inspiration to South Africa’s black majority as they struggled under the racist oppression of apartheid and an inspiration also to a generation of people outside South Africa fighting to make a better world.

“Free Nelson Mandela” adorned posters, mugs, badges, leaflets as well as featuring in the familiar song. The ANC worked hard to build the reputation of their leader as he languished in prison. Instead of “Free all South African political prisoners” the ANC insisted on the slogan “Free Nelson Mandela and all South African political prisoners”. He became a symbol of righteous struggle for freedom and human dignity, embodying the very best of human qualities to which most of us would aspire.

On his release from almost 27 years in prison in 1990 his integrity and charisma were obvious to all and he was feted by the international media. He became the greatest political rock star of the 20th century.

His legacy for South Africa was as the most important leader of the anti-apartheid struggle and, through his election as South African president in 1994, in the dismantling of racist apartheid laws and the bringing of civil and political rights to South Africans of all colours. His legacy in economic and social policy however is at best deeply disappointing.

His 1994 election was a huge victory for the people of South Africa and was won by resolute struggle through mainly black South African unions as well as churches student organisations and activist groups. South Africans paid a heavy price in blood before apartheid was overthrown.

Here in New Zealand we were an active part of the international solidarity movement and had a personal impact on Nelson Mandela which we weren’t aware of at the time but which will be remembered as the most poignant connection between the two countries in the darkest days of apartheid.

In 1981 Mandela had been imprisoned on Robben Island for 17 years and he said that when the prisoners heard the rugby match between the Springboks and Waikato had been cancelled due to anti-apartheid protestors invading the field he said the prisoners grabbed the bars of their cells doors and rattled them right around the prison – he said it was like the sun came out.

In 2009 I went to Robben Island and stood in Mandela’s tiny cell and got a small understanding of what it must have meant to him hearing that dramatic news from New Zealand.

So all those who marched against apartheid; those batoned by the red squad; those beaten by pro-tour thugs; those hospitalised; those arrested and those sent to prison as a result of protests against apartheid should feel real pride for the fact that little New Zealand, on the other side of the world, was able to punch a hole in the apartheid system and let some light in.

It was the protestors on the field at Hamilton and those hundreds of thousands of decent New Zealanders who marched against the tour who brought this moment of hope and delight to the struggle. Considering New Zealand’s size we mounted some of the biggest protests against apartheid outside of South Africa itself.

On the other hand it was the likes of those on John Key’s delegation to Mandela’s funeral who stood resolutely with Prime Minister Rob Muldoon and the white South African regime in 1981.

Don MacKinnon and Jim Bolger were tour supporters and apologists for the South African regime. They welcomed white South African representation in Wellington and supported all kinds of links with the apartheid regime. They ignored calls for a boycott. National said Mandela was a terrorist and the ANC was a terrorist organisation. It’s an embarrassment to be a New Zealander when these hypocrites with so little character and limited integrity are to represent us.

Mandela’s anti-apartheid legacy is very strong but what followed his election as president in 1994 was little short of disastrous. Mandela was at the peak of his political power and the ANC had the opportunity to make changes in economic direction to empower black communities and begin to deliver on the ideals spelt out in the ANC’s 1956 “Freedom Charter”.

Mandela and the ANC failed to do so and in many ways the majority of South Africa’s population are socially and economically worse off now than under the old apartheid regime.

While the world was celebrating the end of apartheid the ANC – at the behest of western governments and corporate capitalists – put in place free-market economic policies which have undermined the struggle of South Africa’s poor and dispossessed while enriching a new black elite.

Just as happened in New Zealand under our free-market policies since 1984, wealth in South Africa is also shifting from workers and the poor to the rich and many in the ANC leadership have been exploiting the system for vast personal gain.

Heroes of the anti-apartheid era in the 1970s and 80s like Cyril Ramaphosa and Tokyo Sexwale are now part of the ANC government and have used their positions to become enormously wealthy at the expense of the people they were elected to represent.

Mandela’s greatest fault was that he remained silent as corruption and exploitation within the ANC grew. It’s a very harsh truth to spell out but he valued loyalty to his former freedom-fighting comrades above the interests of the poor and the disposed majority of South Africans.

So with Mandela as President old elites continued to run the country albeit with some more black faces at the top of the rich list.

The South Africa Mandela has left is one where all people now enjoy civil and political rights, vitally important elements for democracy, but without significant economic change which would have made life better for the majority of South Africans.

I met some of these groups in South Africa in 2009 – groups like Abalahli baseMjondolo, the shack dwellers movement which is mobilising communities in housing campaigns. It has suffered violent attacks from ANC youth groups used to intimidate anyone opposing the ANC policies.

These are the groups which now need international support. They won’t get it from Key, Bolger or MacKinnon at Mandela’s funeral but they will from ordinary New Zealanders.