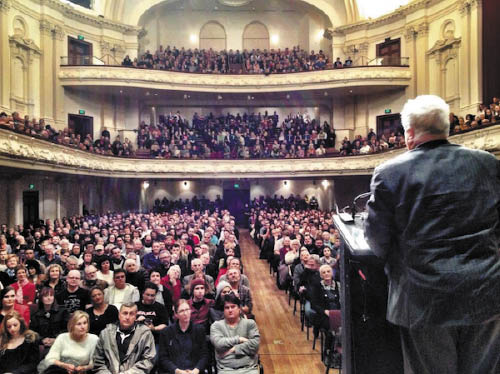 It has now been several months since the public response to the GCSB legislation earlier this year, including public meetings where The Daily Blog played a central role in facilitating the debate.

And, remember the government’s response?

“Snapper are more important.  Democracy…what?  You want to have a voice?  Oh, just have a referendum, because we’ll listen to that.  Oh, hang on…a referendum…ahhhh…”

But, rather than wither away and become irrelevant as the government would hope, recent global events confirm the call at the time from Labour and the Greens for a full public inquiry into the role of our security operations.

In fact, I see no reason why we cannot be the country that leads this discussion internationally.

In truth, this is about much more than the misunderstood term of “national security”.  At the heart of this discussion lies a fundamental question.  It is about your relationship as a citizen to the state: what power will you give the state to look into your affairs and the affairs of your fellow citizens.

It is also about the relationship we want our state to have internationally with our friends, and our enemies (potential or real!).

It is about human rights – the civil liberties that were fought for and our country was built on.  Yet, the erosion of those rights and liberties is happening all too easily.  We are missing a national conversation with real public engagement, unmotivated by fear but more properly driven by informed, rational discussion.

Sadly, this erosion reflects a global (well, western) trend.  In this post 9/11 world, we have seen fear used as a weapon for increasing state action without effective oversight or transparency.

We have also seen a shift in geo-politics with the Anglo-US alliance weary of growing influence of the BRIC (Brazil, Russia, India and China) countries (and others too, of course).  Coupled with exponential technological advances, the US in particular is keen to maintain its geo-political influence through using and dominating that technology.

Through the disclosures of Chelsea Manning and Edward Snowden, US citizens are now learning that the National Security Agency (NSA) has almost had carte blanche access in the collection of information across the entire planet, and possibly also within the US.  Attempts at oversight from Congress have been impotent.  Americans are rightly questioning the role of the NSA and the parameters of its activities.

Let’s not forget the broader context here either.

There is Guantanamo Bay and the nature of the upcoming Military Commissions including the trial of Khalid Sheikh Mohammed and others.  The status of these detainees under US and international law, the restricted access to Counsel, the acquisition of evidence, and the entire framework set up around these Commissions set unfortunate precedents and are inconsistent with a strong rule of law approach.

Likewise, the use of unmanned aerial vehicles in targeted killings (ie, predator drones).  Is someone sitting in a control room in Langley using a joystick a combatant for the purposes of international law?  What are the boundaries now of international armed conflicts?  By using these drones in Pakistan, Yemen, and Afghanistan, does the “War on Terror” have any territorial or temporal limits?

These are questions, fundamentally, about the power of the state over individuals: citizens and non-citizens.  Traditionally, and in response to the wishes of the people, the law has sought to limit this type of power.  But, recently, such powers have been augmented with overly broad and sweeping powers in the name of “national security” absent a real discussion (I accept that these issues are discussed constantly and in depth by experts, including special rapporteurs appointed by the UN, but I am talking about a broader, more public engagement).

The recent detention of David Miranda, the husband of journalist Glenn Greenwald (formerly of The Guardian), was an abuse of power amid a flexible, but flawed, interpretation of terrorism.  In attempting to intimidate Miranda and Greenwald, the UK authorities misused the particular legislation to curtail freedom of speech.  The only good thing about this episode is seeing the vital role of an independent judiciary as we watch the action taken on behalf of Miranda proceed in the UK courts.

More recently, Australia has been getting its hands dirty.  We have heard about spying on Indonesia, and this week the story is about East Timor (allegedly espionage for “commercial advantage”, which is interesting for us as our economic interests are now clearly perceived as coming under “national security” in our legislation).

The Australian Attorney-General also authorised a raid by Australia’s intelligence service on the Canberra office of the Australian lawyer representing East Timor in its claim against Australia surrounding the alleged espionage.

Laughably, the Attorney-General has said that the raid had nothing to do with disturbing or impeding the case.  Is he serious?  I think he actually might be.  Regardless, it is a clear attempt to intimidate and is a questionable use of federal power under the auspices of “national security”.

In this same week there have been stories in the Australian media around the Abbott government’s concerns that there will be more leaks flowing from material held by Edward Snowden directly regarding Australia.  Adam Bandt, the Deputy Leader of the Greens, had an interesting response: “if they have nothing to hide, then there is nothing to fear”.

The United States, the United Kingdom, and Australia.  All members of the Five Eyes network.

In 2014, then, a public inquiry around the operations of our security and intelligence services needs to be squarely back on the agenda and demanded by New Zealanders in the lead up to the election.

Let’s not forget the protests around the passing of the GCSB legislation.  Let’s not forget the energy and how New Zealanders were actually mobilized and engaged on this issue.  That is the type of electorate we need and want – that is the democracy we should aspire to as more civil liberties are eroded and we have a government who refuses to represent us, but rather prefers to rule us.

In brief, an inquiry should take a comparative approach and review the procedures and oversights used by other countries.  We should acknowledge the basis for why we need such services, and then simply create the best platform in the world for them to operate in our open society with appropriate checks and balances.

We can have the discussion.  There is no reason why not.  We have led the world before in being progressive, and we can do it again.

Note: After writing this blog, I was referred to a more articulate expression of aspects of what I was trying to say here – see Richard Falk’s piece: Escaping the Abusive State After Snowden.

Also, I just want to mark the passing of Nelson Mandela.  I want to thank his family and the people of South Africa for sharing him with the world.  As a planet, we were blessed to have him.  For a range of South African thoughts on Madiba, I encourage you to read the posts at the Daily Maverick.