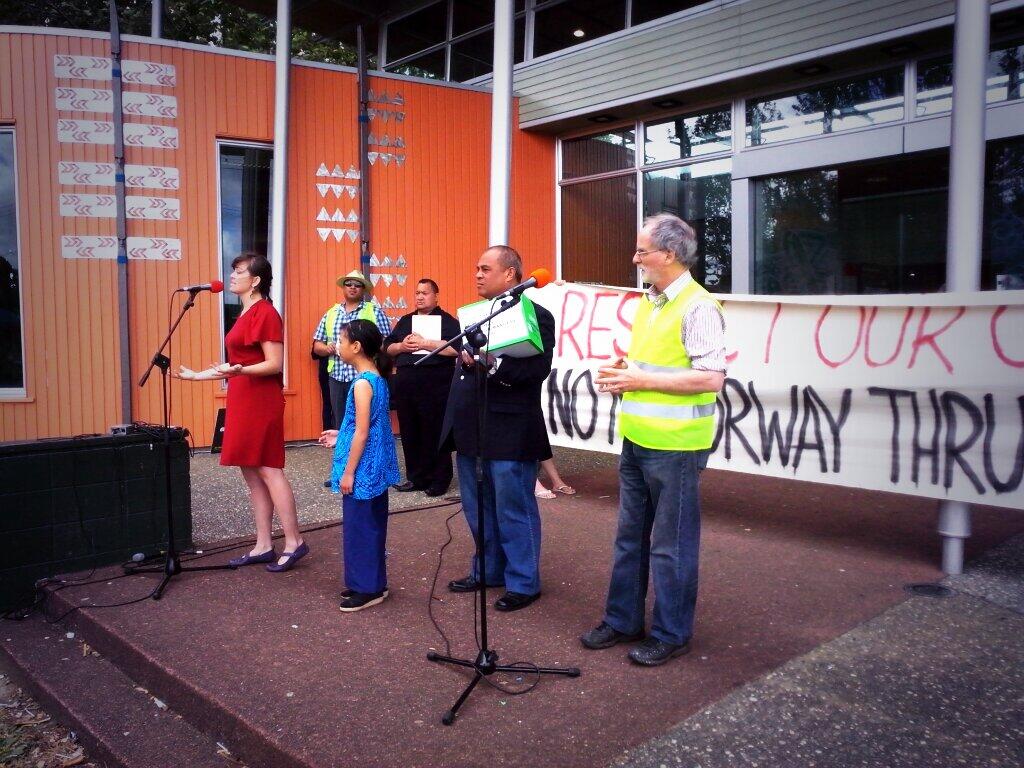 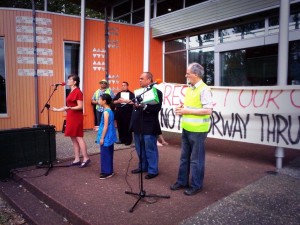 The Government is hell bent on destroying another vibrant, and vulnerable, community for the sake of ANOTHER motorway in Auckland.

This seems insane, but the enigmatic (and until very recently, nonexistent) plan for an “East-West Link” to deal with freight problems between Onehunga and East Tamaki has jumped the queue to be one of the top infrastructure priorities of the Government. It was a clear bait and switch, when they announced support for the City Rail Link (which is actually a five+ year delay).

Credit to John Minto and others who earlier blogged here about the Mangere Motorway and organised some fantastic public meetings.

While only two of the options under consideration are actual motorways, none of the four options are good news. And word has it that the Government (surprise, surprise) prefers a motorway option.

Auckland Council will be torn – on the one hand, Len is from the south and the local board and MP do not support a motorway that will take hundreds of houses. On the other, Auckland Transport is short of cash for the wishlist of (mostly silly and eye-wateringly expensive road) projects in the Auckland Plan. If it is a full motorway, NZTA pays 100% for it, which means rate payers are off the hook.

TLAs and Unitary Authorities usually find it pretty difficult to oppose billions of dollars in infrastructure, even if it is destructive, because firstly, they don’t have to pay for it, and secondly, many of the rich, old white businessmen who dominate the public discourse clamour that it will raise productivity and improve traffic.

Unfortunately for us, those dinosaurs really haven’t got a clue how transport systems work. New motorways do not reduce congestion and they certainly don’t reduce transport costs overall. In fact, the latest household survey shows that households are spending even more on transport, 14%, which makes it the third largest item of household expenditure. Lower income households either have to spend even more, or suffer reduced access and opportunities to get places.

The Auckland Transport Blog has done a number of excellent posts examining the East-West Link proposals and a much more cost-effective, non-invasive solution that could address some of the traffic issues without taking any homes, destroying communities, or locking us into an entirely oil-dependent future.

One point that has not been noted is that most of the problem of unpredictable travel times is linked to the fact that at least one of the inland ports located in the Church Street/Nielson Street area doesn’t schedule its arrivals. Truck drivers can show up any time they want, and sometimes this results in huge queues backing out onto the streets.

The answer to this problem is not to throw billion at another motorway. It is to tell the affected businesses to get their sh*t together and start managing their arrivals. Hell, we could give them a couple hundred thousand to get the software set up.  But apparently it is cheaper and easier for them to lobby National to fast track some insane motorway which in all likelihood will not improve transport productivity as much as investing the same amount of money into sustainable, affordable alternatives that reduce the demand for vehicles on the road.

Last Saturday, I spoke at the Mangere Christmas Festival, where 4,000 signatures were presented to local Labour MP Su’a William Sio against the proposed motorway. All this community activism is excellent, and has scared Auckland Transport and NZTA into putting out a release yesterday assuring us they will listen to the community.
We have got to ramp up the pressure and keep it on. The community deserves to be protected from the interests of National’s mates, the local freight companies and contractors that will benefit from more billion-dollar infrastructure projects. By this time nest year, we can change the Government and provide smarter transport choices, and real opportunities, to the people of South Auckland.