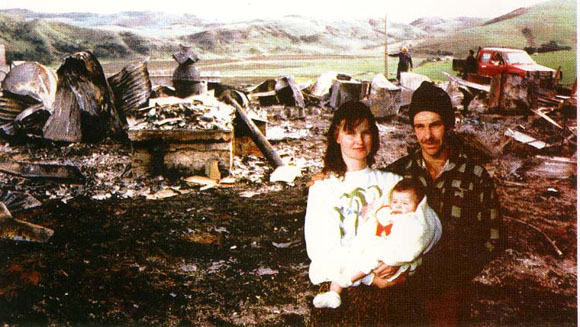 I hope “Doing a Titford” makes its way into the New Zealand lexicon for a politician or campaigner who uses anti-Maori or anti-Treaty rhetoric to create fear and resentment for political gain.

That’s precisely what Alan Titford did for 20 years till he was sentenced last week to 24 years in prison on 39 charges, including assault on a woman and children, sexual violation, arson, threatening to kill, assault with a weapon, and perjury.

Here’s how the stuff website reported the story last week:

Northland farmer, anti-Treaty of Waitangi campaigner and Far North mayoral candidate Allan Titford has been jailed for 24 years on sex and violence charges.

Found guilty on 39 charges but protected by name suppression until today, he was sentenced in High Court in Whangarei.

Charges included assault on a woman and children, sexual violation, arson, using a document with intention to defraud, threatening to kill, assault with a weapon, perjury, attempting to pervert justice and discharging a firearm.

His name had been suppressed while he ran for mayor. He tailed the field home, winning 414 votes.

Titford had a high profile in the late 1980s and early 1990s, as he fought the Crown over a farm he owned at Maunganui Bluff, on the coast north of Dargaville.

A 1992 Waitangi Tribunal recommendation had said his 670-hectare Aranga farm should go to the Te Roroa iwi.
After a bitter dispute, the land was bought by the Crown for $3.25 million in 1995.

Titford claimed Maori had torched his home and caused other damage to his farm during the bitter seven-year wrangle.

The Te Roroa people had claimed 38ha of the property, after it was found the Manuwhetai Reserve, at the centre of the dispute, had been included in the farm land title by mistake decades ago.

Titford was also found guilty of an arson he had blamed on Maori.

Judge Duncan Harvey told the court Titford had twice tried to burn down his own home on the Aranga farm, and the second time had succeeded.

His actions were an attempt to procure sympathy for his plight, and had turned the public against Maori.

“It is time for the people of New Zealand to learn the truth,” he said.

The court heard Titford dominated his ex-wife. In an unusual move, Susan Cochrane waived name suppression so that Titford could be named.

Victims of sex crimes have automatic name suppression, which can prevent their attacker being named.

In her victim impact statement, Cochrane said Titford used her as a sex slave for 22 years. She had suffered from depression and had considered suicide.

Titford was upset, maintained his innocence and was considering his options, his lawyer told Radio New Zealand.

Titford deserves remembering  because his lies were so toxic and cruel, bitter and racist. They were damaging to race relations and undermining of Maori demands for justice.

For 20 years he portrayed himself as a victim of Maori hatred, violence and intimidation. He honed race hatred to such a fine edge he even committed arson on his own property and blamed it on local iwi. He provided “evidence” for what every racist Pakeha wants to believe – that Maori are grasping thugs who used violence and intimidation to get their way against hapless Pakeha

While we are at it we should use the expression “Titford fire” rather than “Reichstag fire” for an act committed by one but scapegoated to another. (The German parliament, the Reichstag, was burned down in 1933 with the Nazis widely believed to be involved. Hitler blamed the Communist Party and used the fire as an excuse for a mass crackdown which consolidated the Nazi stranglehold on Germany)

Just how influential Titford’s anti-Maori and anti-Treaty campaign has been is hard to judge. The ACT Party have had similar views for two decades and Don Brash’s infamous 2004 Orewa speech was built in part at least on reverberations from Titford’s campaigning.

Even today echoes of Titford are seen in Colin Craig’s Conservative Party policies, National’s opposition to Maori seats in parliament and Labour’s abandoning of “closing the gaps” between Maori and Pakeha social statistics.

“Doing a Titford” and “Titford fire” would be appropriate expressions to remember him by.