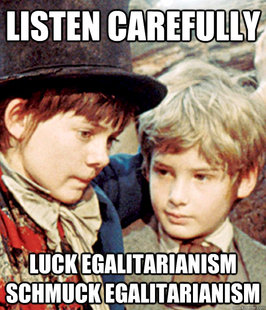 Listening to people who would deny their neighbours a living wage, kick families out of state houses, and insist those on a benefit eat no junk food ever, there is a common theme I’ve noticed coming through.  It is a belief that because they themselves are not poor they are somehow superior, better, than those with little or less.
Good choices, rather than bad, are apparently behind their improved status.  At least that’s what I guess it is comforting to tell yourself.  I could never be poor because I make good choices, I work hard, I’m better than that.
But what about the advantages of birth?  A matter of who your parents are, the family you are born into and their circumstances, the place, the time.  If Bill Gates had been born earlier he wouldn’t have been in the right place at the right time to get into the computer geekery that later made him billions.  If Andre Agassi hadn’t had a father who was determined to create a tennis champion would he have won all those Grand Slams?  And would someone like me, the first in my family to get a degree, ever have stuck out university without the financial support of money left to me by my grandfather?
Let alone the privileges of birth that come with skin colour and gender, and the genetic lottery that determines appearance, sexual orientation and identity, all influenced to a greater or lesser degree by those crucial early years and beyond.
Once you are an adult the luck stops though, surely, and the superiority kicks in?  Not if you have got a good education because your parents stayed together, never moved house, and were able to support you at school.  Not if you get your first job, your start in the paid workforce, through family connections, even if it’s sweeping up the warehouse floor.  Not if your tertiary qualification came about because you were able to live in the city which offered that course.  All of these factors, and many more, are more determined by good luck than they are by your skill or good decision-making.
And then there is bad luck; bereavement, illness, disability, unplanned pregnancy, sexual abuse, malnutrition, lack of housing, divorce, redundancy, substance abuse, adult illiteracy, and so much more in the household which can impact hugely on kids.  Yes there are many who overcome those obstacles, and there are some who don’t.  Whether a person does or not, there are many factors at play and most of them are out of your control, especially as a child.
So next time you hear someone claiming anyone can get a better paid job if they want to, and programmes like Breakfast in Schools just encourage bad parenting, you may want to point out that the only reason they aren’t in need themselves is luck.
We can help create good luck and minimise bad luck through the way we structure our society and in particular how we support the vulnerable.  These are political decisions we can make, to direct resources with the intention to create equity for all rather than excellence for a few.
But first we need to recognise that our status, our income and our advantages are not a result of our superiority, but instead have come about due to a cascade of good luck, starting at our own Year Dot.  If we really want everyone to be able to harness their potential, to succeed (whatever that means in each context), then we must seriously attempt to balance up the vicissitudes of luck.