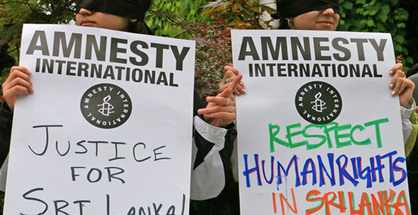 “They blindfolded me, and bound my hands.  My son was crying a lot as he did not understand what was going on.  They then untied my hands so that I could pick him up.  They took us outside and put us into a van – I knew it was a van because I could hear them shut the sliding door.  They took me somewhere, I do not know where exactly, but the drive was not that long.

They took us inside a house.  First, they separated me and my son.  My son began to scream and cry again.  They brought him back to me to keep him quiet.

They beat me, and then burned my leg with a scalding iron.  This was extremely painful.  My leg swelled up and there is a huge scar on my leg, a scar that is still infected and causing me pain.  My son also seemed to have a fever.  We received no medical care.

They touched me in a sexually bad way.”

I have lifted these paragraphs from a statement I took from a Sri Lankan asylum seeker I acted for in Bangkok.  She is Tamil, from Batticaloa.  Her son was two years old.  Her captors were conducting enquiries on behalf of the Sri Lankan authorities.

These events occurred after the end of the conflict in Sri Lanka.

The events she deposes to are not extreme in any way.  I have other paragraphs more graphic in detail.  After acting for hundreds of Tamils, these are merely normal.  Torture, enforced disappearance, sexual violence, extrajudicial killings…are all common themes in the narratives of Tamil refugees.

This is from the 2013 Human Rights Watch World Report:

“Sri Lanka made no progress in 2012 toward ensuring justice for the victims of numerous violations of human rights and the laws of war committed by both sides during the 26-year-long conflict between the government and the LTTE.  These violations include the government’s indiscriminate shelling of civilians and the LTTE’s use of civilians as “human shields” in the final months of the conflict, which ended in May 2009.

The government continued to ignore the 2011 report of the panel of experts appointed by United Nations Secretary-General Ban Ki-moon, which recommended establishing an independent international mechanism to monitor the government’s implementation of the panel recommendations, conduct an independent investigation, and collect and safeguard evidence.

In March 2012, the UN Human Rights Council (HRC) adopted a resolution finding that the government’s Lessons Learnt and Reconciliation Commission (LLRC) did not adequately address serious allegations of violations of international law, and called on Sri Lanka to take all necessary steps to ensure justice and accountability. It requested that the government expeditiously present a comprehensive plan detailing the steps it had taken to implement the LLRC’s recommendations and to address accountability.

The Sri Lankan government responded by publicly threatening human rights defenders who had advocated for the resolution. In July, the government announced that it had adopted an action plan to implement LLRC recommendations. The plan vaguely calls for the government to look into civilian deaths and prosecute any wrongdoers. It sets out a 12-month timeframe to conclude disciplinary inquiries and 24 months for prosecutions. But the government proposal merely leaves responsibility for investigations with the military and police, the entities responsible for the abuses, using processes lacking in transparency.”

Meanwhile, our Prime Minister, John Key, was asked whether he would support an independent inquiry suggested by David Cameron:

“I’m not sure what that would achieve.”

Rather than accountability, John Key prefers impunity.  He is content as long as “progress” is being made.  Who cares if individuals responsible for gross breaches of international human rights and humanitarian law remain in positions of power and influence?

To the victors, go the spoils.  To the victims, goes our milk powder.

I simply can’t see any basis for our election to the Security Council (but, we’ll get Sri Lanka’s vote!).  This is a pathetic illustration of our current ability to be an independent and vigorous arbiter of international law.  John Key and Murray McCully have abandoned our normal upholding of the importance of a multilateral rules based approach in favour of securing a commercial deal, an elephant, and setting up a new All Blacks fan club.

But, I am clearly an idiot.  For the New Zealand Herald tells me so: PM’s softly softly on Sri Lanka may just work.

Just, I am afraid, towards impunity.  On our behalf.