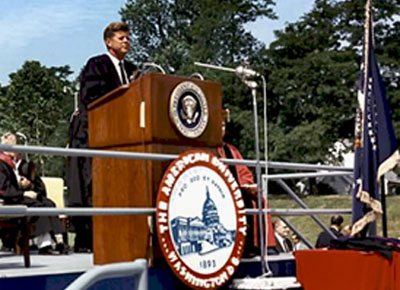 TOMORROW IT WILL BE FIFTY YEARS to the day that President John F. Kennedy was assassinated in Dallas, Texas. In the months before his death the President had embarked on a series of positioning speeches. There was nothing unusual in that: 1964 was an election year and it was standard practice for a President seeking a second term to identify early the major themes of his re-election campaign. What was unusual, however, was the picture that those positioning speeches was bringing to life.

The most arresting feature of the President’s emerging picture was the dramatic change it registered in his thinking about the United States’ relationship with the Soviet Union. In an address to the students of the American University on 10 June 1963 Kennedy made clear his willingness to effect a rapprochement with the Soviets. Even after the passage of 50 years, the poetry of his peroration still possesses an incantatory beauty:

“For in the final analysis, our most basic common link is that we all inhabit this small planet, we all breathe the same air, we all cherish our children’s futures, and we are all mortal.”

There are some who claim that those words cost Kennedy his life. It is not a foolish claim. Because in that single, remarkable sentence, the President did what no Commander-in-Chief should ever do in a time of war – be it hot or cold – and that is to acknowledge his own and his enemy’s common humanity.

Yes, America’s enemies were communists. And, yes, they possessed a vast arsenal of nuclear weapons. But the Russians were also parents, poets, educators and engineers. They smiled at sunlight and frowned at rain in exactly the same way that Americans did. In the manner of human-beings everywhere, the Russians laughed, got drunk, made love, and fell asleep hoping for a better tomorrow.

“[A]nd we are all mortal.” Kennedy’s final words to those young university students was a heartfelt reminder that, once unleashed, nuclear fission makes no distinction between capitalists and communists. On that gloriously sunny day in June 1963, JFK turned from the deadly calculations of the Cuban Missile Crisis that had consumed him and his brother Bobby just eight months earlier, to the most basic and life-affirming proposition of progressive algebra: that no matter what is included on the variable side of the existential equation, our common humanity must always be part of the solution.

AND IF A COLD WARRIOR like JFK could be brought to the realisation that he and his enemies were bound together by the “basic common link” of their humanity, I am at a loss to explain the New Zealand Left’s extraordinary ability to demonize (and attempt to silence) not only its enemies, but also its own. The accusations and recriminations that have marred the Left’s discussion and debate of the Roastbusters Scandal have left many people of a progressive persuasion feeling disturbed, disgusted and depressed.

As The Daily Blog contributor, Allan Alach, put it:

“Hey people on the Left, we’re on the same side ….. the real ‘enemy’ is over there ….. We’re all heading in the same general direction, even if we do choose to take different routes to get there.”

And there it is again – the appeal to what we share in common that distinguishes the genuine progressive from the mere ideologue.

Sadly, discussions of this sort make the mere ideologues madder than a bag of cats. The very suggestion that those whom they have spent so much energy demonizing might not be demons at all, but ordinary human-beings like the rest of us – albeit with a slightly different (or downright perverse) take on the matter in dispute – raises the awful possibility that the accusers may themselves end up being accused. That from being hailed as the people with the solution, the mere ideologues may suddenly find themselves redefined as the problem.

This perversion of identity is one of Capitalism’s chief crimes. Like poor Willy Loman in Arthur Miller’s Death of a Salesman we become our job – mistaking our selves for the labour we contribute to the system, instead of discovering who we truly are by living a full and free life.

The injustice of the Roastbusters Scandal lay not in what it meant for a group of young women, or indeed for the group of young men responsible, but in its perversion of what it means to be human. Unfortunately, the full elaboration of the Roastbusters assault on what was human in the young women they raped was hindered by the assertion that these young men were simply acting out the imperatives of a “Rape Culture”.

In this culture, gender identities have become so perversely fixed, so mutually disabling, that women have become the natural prey of men. Indeed, so powerful and all-embracing has this toxic patriarchal system become that it is able to sexualise girls as young as 13. And if Rape Culture, by means of the music video, has taught teenage girls how to dress for dinner, it has made equally sure, through the pornographic video, that young men know how to eat it.

Paradoxically, it was precisely this social monstrosity that Willie and JT, in their own hectoring and insensitive way, were attempting to expose on Radio Live. In a curious way, they had taken the feminists at their word, and in a totally ham-fisted way, were trying to do something about it.

The problem, of course, is that if Rape Culture is as real and as powerful as is claimed, it will successfully resist all attempts to destroy it. Only if it is less than omnipotent; only if there exists, in a place beyond its reach, a vast reservoir of decent and generous humanity, can the sickness that the Roastbusters have come to symbolize be cured.

But, to tap into that vast reservoir of humanity it will first be necessary to acknowledge the “basic common links” that bind all of us: men and women; black and white; gay and straight; Russian and American; together. That we “all inhabit this small planet, we all breathe the same air, we all cherish our children’s futures, and we are all mortal.”