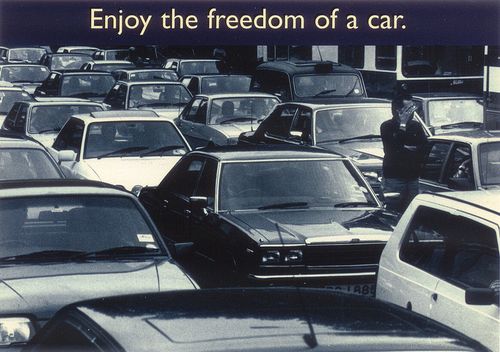 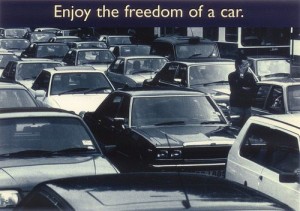 The automobile is often cast as a great liberator. The power to travel long distances at great speed, free of the tyranny of timetables or fixed routes. There is no question that a car can be a very useful tool for transporting a small group of people at odd hours of the day or night, the best way to transport heavy or unwieldy objects, and often the only way to get to far flung beaches or mountain tracks.

But how free are the commuters stuck in traffic jams each morning? In 2006, over 80% of people drove to work. Whether or not they got stuck in congestion, they are stuck paying the high costs of owning, operating and maintaining a motor vehicle that will sit idle 96% of its life.

More than 80% of New Zealanders also live in urban areas, and most urban trips are actually quite short distances. About one third of morning peak trips are less than 2 kilometres, and nearly half are less than 5 kilometres. These are not great distances, and during morning congestion they are unlikely to be high speed. So why don’t people walk or cycle for more of these trips?

Quite simply, because the road environment tells them they don’t belong there – and in fact they may feel they are risking life and limb. (In reality, the health benefits of cycling outweigh the safety risks significantly, but it certainly doesn’t feel safe.) The roads have been designed for large volumes of vehicles to travel at high speeds, and this is terribly unpleasant environment for people not encased in steel boxes.

Too much of any good thing can completely undermine its advantages. Cars are very useful, but they aren’t the most practical or affordable way for everyone in an urban area to get to school and work.

Cities in other parts of the world have taken a different approach to transport planning, and treated bicycles as a serious mode of transport that deserves safe, separated infrastructure. And the results are a transport system that is truly liberating, because it is affordable and accessible to a greater range of people.

The public infrastructure costs of providing for one person to travel one kilometre in a car are about 8 times higher than that required to provide for one person to travel the same distance on a bicycle. The land required for parking or storage for a car can be 20 times greater for a car than for a bicycle, if the car park is off street. But the private cost of car ownership and operation is about 50 times greater than for a bicycle.

By designing our streets entirely around motor vehicles, traffic engineers not only have inadvertently aggravated congestion and imposed costs on ratepayers and tax payers, they have imposed a financial burden on many who may well have preferred the freedom of bicycling for many of their short trips. (One doesn’t need to own a car to get the benefits of using one occasionally. There are alternatives to car ownership like car share that provide much more affordable access to newer vehicles.)

About one third of New Zealanders cannot even drive, due to age, income or disability. Public transport is an important part of a balanced transport system, and I have argued that we can provide better service with more affordable fares, but the most liberating and empowering step we can take is to enable more New Zealanders to get where they need to go under their own steam. Cycle infrastructure, if well-designed, can be perfect for mobility scooters, children, even the elderly if we take the example of the Netherlands given above.

I can’t adequately describe to you, dear reader, the simple beauty and joy of cruising along a tree-lined street on a bicycle, especially without the noise, pollution, and fear of death that dominates in our current transport environment. But there is no doubt that everywhere proper, safe cycle paths have been provided, people of all ages and abilities are happily enjoying the freedom to get around their community. And those who don’t cycle also benefit from far fewer cars on the roads. The video embedded above goes some way to illustrating the possibilities…