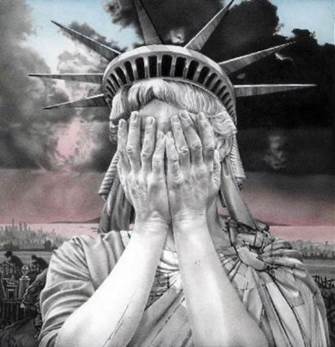 LIBERTY is never threatened in the quiet hours of our lives. When all is still and at peace it is easy to pay homage to the political achievements of our ancestors.

In the quiet times of history, those core civic values of freedom, equality, tolerance and respect for the rule of law are ritually invoked by rulers and ruled alike. All of us take pride in the rights bestowed upon us by our democratic form of government. Why should we not when our willingness to defend those rights has never been tested and we have done nothing for which we should feel ashamed?

But when injustice incites civic tumult and passions rise? Surely, these are the moments when the achievements of our ancestors are most directly threatened. When the wrongs men do seem so great, and the pain they cause flares into an all-consuming rage, that is when we are tested. For it is precisely at those times, when the cry for justice is drowning out all other voices, that those who cherish it are called upon to defend what my friend and comrade, Martyn Bradbury, has called “the finer points of freedom”.

For the absolute certainty of our own righteousness can lead us to do terrible things.

When, in the early thirteenth century, the Cathars of Southern France challenged the orthodoxy of the Catholic Church, the Pope declared a holy crusade against them. Arriving at the little town of Beziers in 1208, the crusader knights inquired of the Papal Legate, Arnald-Amalric, how the citizens guilty of heresy could be distinguished from those who were faithful. Eight hundred years later, this Man of God’s reply still has the power to shock:  “Kill them all”, he advised, “God will recognise His own.”

And just in case we are tempted to say that all such examples of moral recklessness belong in the distant past, consider the bombing of the German city of Dresden. Less than 70 years ago, our parents and grandparents were so certain that they were engaged in a Manichean struggle of Good against Evil that they sanctioned the terror-bombing of a city filled with fleeing refugees. The resulting firestorm incinerated at least 25,000 human-beings – most of them women and children.

Those helpless refugees were fleeing from the armies of Joseph Stalin’s Soviet Union. In the years before the German invasion of his country, Stalin had presided over a series of ideological purges in which hundreds of thousands of ordinary Russians were rounded up and executed for alleged crimes against the Soviet state.

Often the only way the accused could save themselves was by denouncing others – up to and including members of their own family. Every aspect of daily life became politicised under Stalin. Every statement had to be carefully weighed in the scales of this week’s orthodoxy (which could be the exact opposite of last week’s orthodoxy). There could be no unguarded moments, no offhand remarks, no relaxation of any kind. Even to be suspected of harbouring counter-revolutionary thoughts was sufficient to see you and your entire family sent to the gulags – or a quiet clearing in the forest.

Over the past fortnight New Zealanders have been brought face-to-face with the great wrong of Rape. As Martyn admonished me in his recent posting:

Martyn’s passion is evident in every word of these sentences. In “that ocean of pain” he argues “the finer points of freedom of speech” simply disappear. In much the same way, I suppose, as the distinction between the faithful and the heretic disappeared at Beziers; the difference between armed combatants and frightened children disappeared in the rubble of Dresden; and the discrepancies between guilt and innocence disappeared beneath the Soviet Commissar’s basilisk glare.

But I cannot dance to that particular tune – not even for my good friend and comrade, Martyn.

As the tumult rose louder and louder around the Roastbusters scandal, and people’s passions rose with it, I was overcome by a deep sense of unease. When anger reaches a certain pitch it begins casting about for somebody upon whom it can be unleashed. In the absence of the perpetrators themselves, and following their incredibly insensitive and victim-blaming interview with Amy, the eyes of the angry and aggrieved settled upon Willie Jackson and John Tamihere. If they couldn’t have the Roastbusters, they would have to settle for these two arch “misogynists” and “apologists for Rape Culture”.

Against the rage of that pernicious culture’s opponents “the finer points of freedom” didn’t stand a chance. Willie and JT may be proud (some would say arrogant) men with an outdated and utterly insufficient grasp of the meaning and pain of Rape (and of how very easy it is to rekindle that pain through insensitivity and doubt) but they did not deserve what happened to them. There are better ways to correct ignorance; other ways to humble pride.

And, finally, Willie and JT are real people: people I know; not crude effigies stuffed with straw and ready for the bonfire. That left me with three choices. To remain silent as they were taken down. To join in the process of their humiliation. Or, knowing that these two men, their ignorance of gender issues notwithstanding, were very far from being monsters, I could insist that “the finer points of freedom of speech” were not submerged in Martyn’s “ocean of pain”.

It is, after all, but a short step from sacrificing “the finer points of freedom”, to releasing Lady Liberty herself into the custody of pitchforks and flaming-torches.