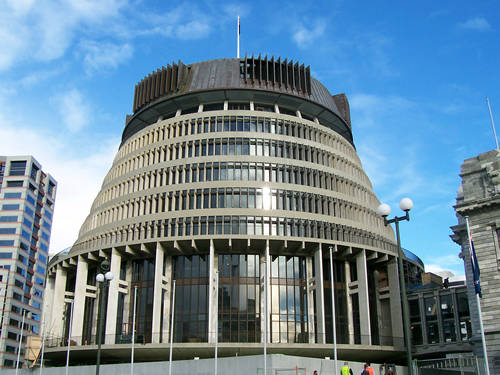 Last Tuesday, during a visit to our nation’s capital to help install a painting show, I stopped by Parliament to see our lawmakers in action. I’m a self-confessed politics nerd and I’ve wanted to do this for about 20 years. I was given a guided tour by then-Invercargill MP Mark Peck on a high school trip once, but it was during Youth Parliament, a disappointment only trumped by the despondent teenage rage at being considered ‘too young’ to apply (a theme that continued well into my political life).  Stand out memories of that trip include: finding the echoing acoustic sweet spot in the middle of each floor, getting told off by security for trying to leave Nandor Tanczos a note and, weirdly, a painted depiction of The Battle Of Chunuk Bair.

Between the gates to the grounds and the Beehive itself, there were three separate protests going on this November 5th; some kind of Guy Fawkes/Anonymous/TICS Bill group, what looked like a bunch of people protesting against human rights abuses in Sri Lanka and the latest installment of the Greens campaign against the Government’s pokies for convention centre deal with SkyCity. Is Wellington always so up in arms, or had it saved it up for me? Apologies, reader, for being so vague (and to the protestors themselves, to whom I ordinarily would have stopped to talk to), but it was almost two o’clock and I had a bunfight to watch.

At 2pm, on any day Parliament is sitting, my soon-to-be-ex office braves the University’s notoriously poor internet infrastructure to watch Questions for Oral Answer or, more colloquially, Question Time. Before you say it, yes, I know that this is often largely gotcha-baiting and Prime Ministerial punchlines, and that the real legislative process is based in the less sexy Select Committee, but when this is what feeds the news cycle (for better or worse) it is worth paying attention to. And we do. Screens are yelled at and hair is pulled. It has been asked whether it was even worth watching before Twitter, whose #nzqt hashtag is a thorough, often informed and occasionally hilarious live dissection of the events as they unfold.

As a live spectator, you have none of those things. You can’t tweet, heckle, laugh, applaud or lean on the balustrade. Present were various transient tour groups (schools and international holidaymakers), and a meager handful of casual observers giving up their stunning spring afternoon. A model family cheered enthusiastically at the end of a John Key set-piece, before receiving a stern talking to by a thickset gentleman in an official looking suit. I once couldn’t contain my disdain, letting out a laugh of disbelief, before receiving a stern talking to from my less excitable (but no less horrified) partner. Demanding decorum from the peasants in attendance would be all well and good, if those we had come to observe didn’t put on such a base and obnoxious spectacle.

While Parliament TV may capture the essence of the ‘robust political debate’, it doesn’t pick up as much of the heckling and barracking as you get on the radio broadcast (the first country in the world to introduce such a thing, incidentally), and nothing compares to the all encompassing cacophony of seeing and hearing it in the flesh. Our two largest and oldest parties spend the entire time plodding through their well-rehearsed parochial barrage, yelling over the top of each other and applauding wildly whenever they think their boss has told a funny. Each caucus is as bad as the other, and it is a funny kind of conundrum seeing people you respect personally and professionally make you start to question all of that all at once. At the other end, the ones you have no respect for are even more loathsome in the flesh. Watching Maggie Barry heckle Jan Logie for talking about safer judicial alternatives for sexual assault victims was truly sickening.

I understand that this is the game we inherited when our colonial forebears brought their Westminster Style over with them.  It is telling, then, that only the parties from our pre-MMP electoral past insist on persisting with it. The Greens, New Zealand First (Winston prefers to frame his interruptions as Points of Order, generally), and the Government’s coalition partners were all well behaved, thankyou very much, and it made me proud to be a member, and representative, of the first of these. It isn’t just the politics of the Green Party that drew me in, but also the way we do politics.

Seeing politics at its rowdiest and most counter-productive made my nerdy nine year old self really sad. Even my 20 years more cynical self was surprised. We have a serious problem with a disenfranchised electorate, particularly among younger voters, and the way our House of Representatives go about their business in Parliamentary Prime Time is as good a contributing factor as any as to why. How many great potential leaders were present in the school groups in the gallery that day, and how many were discouraged from wanting to be enter politics because they want nothing to do with the loud, macho, chest thumping, brow beating culture that comes with it? Hell, if we could address that we might start to do away with the need for all sorts of quotas, not least the ones encouraging greater numbers of women in Parliament. If MPs are serious about increasing civic participation and voter turnout in this country, as opposed to just talking about it in platitudes from time to time, they really need to look in the mirror, pull their heads in, and start from there.  Until it is obvious that they’re taking the job seriously, why should they expect anyone to take them seriously?