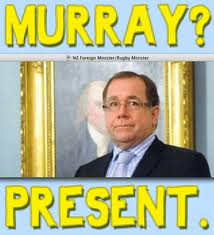 Huge public and political pressure has been mounting in India and the sight of Singh shaking hands with the murderous Sri Lankan President Rakapaksa is one the ruling Indian Congress Party is worried will backlash in coming elections.

We can hope the withdrawal of the leader of the most populous commonwealth country will bring stronger pressure on the remaining leaders, including our own John Key, to rethink joining a war criminal in the international limelight.

Key is not known for his concern for human rights. He’s happy to screw low-income New Zealanders to add a double lining to the pockets of the rich but surely even our smiling assassin would be appalled at the murder of 40,000 to 70,000 Tamil civilians at the hands of Mahinda Rajapaksa’s armed forces in 2009? It seems not.

Last week I sent Key a link to the UK Channel 4 documentary No Fire Zone which details horrific, systematic mass murder, rape and genocide against the Tamil population of Sri Lanka in 2009. I’m not holding my breath for a response.

Human rights abuses continue in Sri Lanka today against the Tamil minority as well as against anyone speaking out or organizing against Rajapaksa. Singhalese journalists, trade union leaders and human rights groups have been targeted as well and “white van disappearances” are common. Here the regime’s death squads kidnap opponents from their homes or work and they are never seen again.

This is one of the reasons the turnout of Sri Lankan New Zealanders was small on yesterday’s human rights march in Auckland. People are scared their families and friends will be targeted in Sri Lanka if they show their faces on a protest in New Zealand. They also face the risk of never being able to return to visit the country.

Meanwhile Rajapaksa has banned all possible protest activity during CHOGM in a wide-ranging crackdown. Repression will be more brutal than ever – but not of course for the remaining commonwealth leaders who will be wined and dined in fine style.

John Key and Foreign Minister Murray McCully have said they will raise human rights issues with Sri Lankan leaders while they are there but no-one will get to hear these weasel words delivered behind closed doors.
It looks depressingly like John Key’s invertebrate flexibility on human rights will be a serious embarrassment to New Zealand next week especially for a country lobbying for a seat on the UN Security Council.