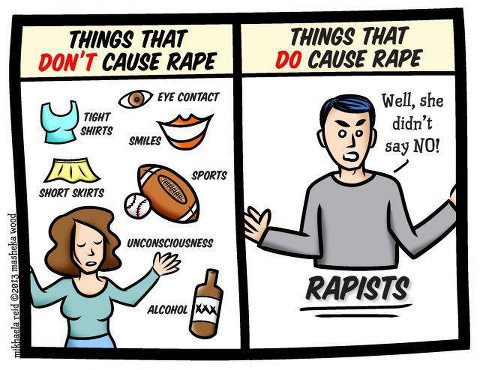 *Crisitunity= an opportunity arising from a crisis

Well the last week has been somewhat of a roller coaster, has it not? We’ve seen some of the worst of what people are capable of. We’ve also seen some awesome stuff happen. I want to acknowledge those who at a time when many of us were blinded by rage were able to turn their efforts to taking practical action. This is by no means a criticism of those who didn’t (most of us didn’t), but rather a pat on the back for those whose words and actions have made a palpable difference to the landscape of the current discourse. A quick (by no means exhaustive) overview of some of these bits and pieces…

First up- Scuba Nurse blogged this great piece on Monday. In it she discusses a range of actions we can all take on a daily basis. Things we can channel our outrage into for good. Be it volunteering, or educating ourselves about the facts of rape and rape culture, or not laughing at rape jokes or donating to frontline services. The blog is a breath of fresh air full of sensible suggestions for combating rape culture.

Then there was of course Giovanni Tiso’s campaign to get advertisers to pull their ads from Willy & JT’s show, which lead to an ad free show. This is important because not only does it put financial pressure of RadioLive to take further action against Willy and JT, it also signals a paradigm shift. It is now not ok for businesses to align themselves with those who support rape culture. Not just rape, but victim blaming too. This is great. It’s another level of sophistication being added to the public discourse and raises the bar for what we expect from businesses in terms of social responsibility. Good stuff. All I ask is that after showing how effective that strategy is, it’s utilized even more in the future (said in bleak anticipation of the bigoted treats Paul Henry is undoubtedly planning on giving us).

There have been a couple of Facebook groups started (Misogyny Busters and Roast Busters are Rapists) which are wonderful for organizing collective action though unfortunately haven’t always been brilliantly moderated, leading to both victim-blaming and calls for vigilante justice (side note: you can’t be against rape and advocate for raping perpetrators, it doesn’t work like that).

There has been a petition started, which calls on John Key to ensure proper support services for victims of sexual violence. On the down side, it shows a lack of understanding of the concept of separation of powers (John Key cannot obviously ensure the boys are put behind bars). I’m choosing to read it more broadly as a call on the government to take serious action to address rape culture which is essentially the crux of what it’s getting at. It has received over 27,000 signatures.

Students at Avondale College have set up a Facebook page and started a website to address problems in their community. I’m excited by this, because I love seeing young people taking action. Right on.

This blog here on The Handmirror also looks at some of the actions which have been taken and lists the dates for the protests and the organization meetings.

So there has been a lot of good stuff which has come out of a terrible situation. I’m sure we will see more of it. Because self-reflection is always a good thing, I’m suggesting we take a moment to think about what what’s been achieved and what still needs doing. We need to consider ‘where to from here?’

Well here’s my two cents. This is a potentially pivotal moment in terms of addressing rape culture in Aotearoa. The hideousness of the story has enraged such a wide range of people across Aotearoa, we must not let that momentum falter, we must make the most of it. And that has to happen by focusing on how this story is indicative of wider rape culture, rather than on how terrible this specific story is. Because it’s not a once off, it is endemic. The conversation can’t start and stop with this story or the discussion ends when the media buzz does. While we’re motivated and the spotlight is on those with the responsibility and opportunity to make changes, we need to be clear in our demands and we need to not shut up until we see real commitment to change.

Everybody is going to have a different area they think is the most important: frontline services, education in schools, the police etc. That’s fine, advocate your little heart out for what you think is the most important. Please don’t dismiss other peoples effort’s when they are advocating for what they think is more important, just focus on your thing. I personally do not think any single area is more important than the others. I think the response we demand must be for changes across the board. So I’m demanding all of the things from all of the people.

Here is my list of things to call for:

-Full funding of front-line services that support victims and do work in preventative education. These agencies should never have funding crises. They should not have to rely on charity. They are an essential service, not a nice to have.

-Comprehensive sexual health education which places consent and respect at the center of discussions. The Family Planning guidelines, announced not long ago, look (though I have not read in detail) to be heading in the right direction. They aren’t compulsory in schools.

-A Public Awareness Campaign about consent and rape culture. This one from Canada is oft shared as an example.

-Proactive focus from the police in making progress on the recommendations laid out in Dame Margret Beazley’s 2007 Report of the Commission of Inquiry into Police Conduct. In 2012, the Auditor General stated that  ‘In our view, the Police’s progress with adult sexual assault investigation and support services is relatively poor, given that it is five years since the Commission published its recommendations.’

-Further training of Judges so they don’t make stupid victim-blaming comments like this.

-Further consideration of alternatives to the adversarial model. This Law Commission report is good background reading if you are interested. A lot of people have found it hard to stomach that the police couldn’t prosecute with what they had. Now, police culture may well be partly to blame for that, but so too is the system they function within. This does not mean we should turn to vigilante justice, but we should be scrutinizing the system itself. If it’s not working, don’t abandon it entirely, fix it. I haven’t formed an opinion on what changes I’d like to see yet, but I think the conversation needs to be had.

I’d love to hear your opinions on what we need to focus on and other actions that can be taken. If I’ve missed anything, please leave links below to share with others. Well done on the fight so far y’all, still more to do but I feel there is potential for real change here.

This has (and continues to be) really hard for a lot of people so please don’t forget to be kind to yourselves and others.