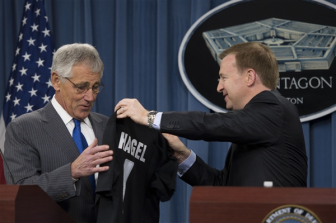 The comments by ex-Deputy Secretary of MFAT Peter Hamilton that it is time for a sovereign nation to remove the English Queen as the Head of State hopefully will serve to focus this weekend’s Labour conference on the importance of an independent foreign policy.

For it comes at a time when National’s Jonathan Coleman in Washington last week underlined National’s subservience to Washington and cringingly declared that no matter how the US treated its supposed allies that there would be no criticism from the Key government.

He was so confident that if New Zealand’s leaders were eavesdropped that no independent streak would be uncovered that he told the press at the Pentagon when meeting Hagel, US Secretary of Defence, that:

…quite frankly, there’d be nothing that anyone could hear in our private conversations that we wouldn’t be prepared to share publicly. I don’t think New Zealand’s got anything to worry about, and we have high trust in our relationships with the US. (Click here for the full US Government transcript published on ForeignAffairs.co.nz.)

So there we have it! Loyal ally and doormat wrapped up in one. And the reward for New Zealand is that Hagel patted Coleman on the head and declared that he had “authorised a New Zealand Navy ship to dock at Pearl Harbour for Rimpac 2014.”

New Zealand has been further rewarded by allowing its Navy to once again enter US ports. And all NZ has had to do has been to sign up to the China containment strategy and continue to downplay its Nuclear Weapon Free Zone status. What does surrendering sovereignty matter between friends? With such a direction what bets on New Zealand staying out of a future Iraq if summonsed?

This craven position gives Labour a great opportunity. It can assure the country that it is the party that will give us our own voice and will not allow us to be one of the dummies of the Washington ventriloquist. Australia is the preferred dummy in any case. So why play second or even third fiddle in the line -up of willing dummies?

On the economic front to Labour can make it clear that it won’t be a prisoner of the “Washington Consensus”. It has that opportunity with the Trans Pacific Partnership (TPP) to insist that there will be no deal unless all the intelligent questions asked are answered to our satisfaction.

Those questions relate to such issues as the ability of the state to create monopolies, such as in electric power, if it deems it to be in the public interest, of bulk buying by Pharmac which angers the pharmaceutical industry but serves the needs of the people, of control over intellectual property and of allowing private concerns to sue the government when it takes steps that are good for the nation but limits the role and profitability of corporations.

Labour needs to stand its ground and insist that this trade deal, and any trade deal, must be open to public scrutiny and comment and face a national interest test before , and if ,it is initialed.

It should ignore grumpy right-wing columnists like Fran O’Sullivan who label as reactionaries those who want intelligent debate and not just slogans on trade, a core issue of sovereignty. O’Sullivan and like commentators would have us believe that Groser’s selling of the TPP is not just spin but reality and that under the TPP we will, according to Groser , then “ enter a world of unparalleled choice and opportunity including the mobility no longer just of capital but of labour and above all ideas.”

This is so much drivel. Capital yes. But labour? Try explaining to workers that they have equal mobility with capital as they battle bureaucrats and police in regard to visas and documents and face exploitation when they do reach the ”promised lands” ‘.

That includes unregulated New Zealand where a toothless Labour Department in our free trade unregulated labour market finds it difficult to even get employers to pay the minimum wage to their migrant workers.

And I haven’t noticed Groser, O’Sullivan and the commentators who parrot the slogans on what the Right sees as the best way to conduct global trade actually welcoming a clash of ideas on this subject. Instead they resort to abuse for any critics of their version of the way the world should trade, labeling them Neanderthals and such like.

Sovereignty is a policy issue where Labour can draw a “red” line with National.

It can go to the electorate, distinct from National, declaring that that decisions will be made in New Zealand under a New Zealand Head of State and a New Zealand flag and that the NSA eavesdroppers will be offended, often, by our conversations. This will provide a clear choice for New Zealanders.

They can have the groveling John Key and Jonathan Coleman or a nation that speaks in its own right.