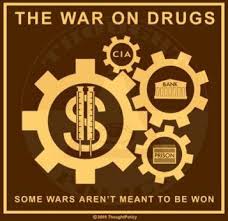 `Narcoland`, by Anabel Hernandez, is a stunning book from start to finish. Robert Saviano`s foreword declares that `it is not the mafia that has transformed itself into a modern capitalist enterprise- it is capitalism that has transformed itself into a mafia`. In 2006 he published `Gomorrah` a searing undercover investigation of the Comorra, the Neapolitan mafia which pervades and corrupts contemporary Italy.

Saviono`s thesis is vindicated by Anabel Hernandez, a prize winning Mexican journalist who explains how drug cartels have progressively colonised state and Federal governments. Like Saviano she has received numerous death threats and is under protection.

After reading the Narcoland story it is easy to see why. So let us begin.

Under the Presidencies of Gustavo Ordaz (1964-70) and Luis Echeverria (1970-76) there were no warring drug cartels. Rather, the major growers and traffickers of marijuana and heroin worked peaceably across different Mexican states. The Federal government, the police and security apparatus took their cut and turned a blind eye. No merchandise was to be sold in Mexico. Instead, truckloads were driven effortlessly across the border into the United States where huge metropolitan markets awaited. Mexican drug profits were used to secure officials and finance state election campaigns. This was a see-no-evil arrangement which provided de-facto tax revenue for successive Mexican governments.

The game changed with the Iran –Contra affair. This turned Mexican drug traffickers from `humble marijuana and poppy farmers into sophisticated international dealers in cocaine and synthetic drugs`. As we know, the CIA backed the Nicaraguan Contras were trying to overthrow the Sandinistas government. When US congressional financial support for the Contras ran out senior officials in the Reagan administration organised secret funding from the sale of arms to Iran. Oliver North, of course, was a well known middleman.

At the same time, another less well known revenue stream was established. Various Latin American drug barons were helped in the export of narcotics to the United States, provided they also donated money to the Contra movement. The traffickers included members of Mexico`s Pacific organisation and Columbia`s Medellin cartel. Planes that took off from the United States with ` humanitarian` aid for the Contras (ie medicene and weapons) returned laden with drugs. In other words the CIA was involved in the drug trade, much to the annoyance of the US Drug Enforcement Administration (DEA).

So much for the `war on drugs`.

During the 1990s Mexican drug cartels became powerful corporate entities. Instead of paying `tax` to government officials the cartels sought to facilitate a reverse takeover of the state. This was a difficult process because the cartels themselves began to feud over territory, contracts and supply routes. Cross cutting family loyalties and marriage arrangements complicated matters. Truces followed firefights and vica versa. The general situation was further complicated by the competition for influence over politicians, public officials, the police, the military and the numerous security agencies which bumped into each other at Federal and state levels. Hernandez gives bleakly funny accounts of inter-trafficker shootouts involving paramilitary types on both sides.

President Vicente Fox (2000-2006) sought to impose order on this chaotic state of affairs. This is where Hernandez`s narrative gets really chilling. In January 2001 Joaquin `El Chapo` Guzman, a ruling figure in the Sinaloa cartel, `escaped` from Puente Grande prison, an arrangement orchestrated by a state governor, the Attorney General and the then deputy secretary in the Secretariat of Public Security. Behind everything was Vincente. According to informants from the US DEA `the Fox Presidency provided protection to Guzman and the Sinoloa cartel throughout its six years in office`. This alliance, which Hernandez calls `the Federation` allowed Guzman to wage war on rival cartels with the extra help of Federal employees. Meanwhile, the Fox Presidency claimed to be prosecuting a war against all drug cartels. National and international news coverage reinforced this distortion of reality.

Events took an even uglier turn under the Calderon Presidency (2006-2012). First, the favourable accommodation of Sinoloa infuriated the other cartels. This was open warfare. Sinoloa members, their supporters and families were kidnapped, killed and/or tortured. The most vengeful of those marginalised, the Gulf cartel, employed former elite soldiers from the Airmobile Special Forces Group and the Amphibian Group of Special Forces. Known as Los Zetas, they eventually formed their own cartel in a bloody war of secession. Second, in December 2006 the newly elected President sent 6500 Mexican Army soldiers to the state of Michoacan to end drug violence there. Over the next five years 45000 troops along with state and Federal police forces became involved in the crackdown. According to international news reports these brutal measures were designed to bring the drug cartels to heel. Here, Hernandez marshals a range of crime statistics to disprove this view of events. Sinoloa`s top echelon, including Guzman, remained untouched as middle and lower tier operatives were arrested to keep up appearances. Third, in 2008 `the Federation` itself began to splinter and intranecine warfare broke out.

Together, these developments have been utterly disastrous. There has been a massive body count, complete failure to quell the cartels as they expand internationally, growing drug addiction within Mexico amidst abject poverty, brutalisation of young people involved in the wars and endemic corruption to the point where state enforcement agencies answer to organised crime.

Hernandez`s solution is to curtail bank money laundering and the reinvestment of drug money into legitimate businesses. `Seize their assets` as Judith Collins might say. One calculation links the Sinoloa cartel to over 3000 legally constituted companies inside and outside of Mexico. Most importantly, Mexico needs to generate a populist campaign against organised crime, political corruption, and social injustice generally to show that another way of living is possible.

Perhaps well off, respectable drug consumers in the United States and elsewhere could assist the campaign by boycotting their favourite products. If none of this takes place Mexico faces a stark future. It will eventually become a failed state and organised crime will merge seamlessly with `legitimate` capitalism