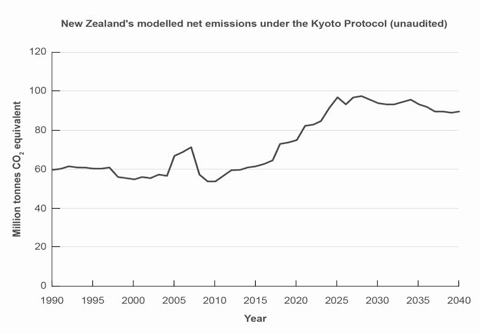 The National-led government’s failure to take the climate problem seriously is setting New Zealand up for an epic emissions reductions policy failure.

Earlier this month the Ministry for the Environment released its annual report (web, pdf). Tucked away on page 60 (scroll down) is this graph, showing New Zealand’s modelled net emissions of greenhouse gases out to 2040.

Small problem: the National-led government has set a target of a 5 percent reduction in emissions by 2020, and a 50 percent cut — to about 30 mt — by 2050. Unfortunately for Tim Groser and Simon Bridges, the two ministers handling the climate portfolio, the Ministry for the Environment clearly believes that current government policy settings are on course to increase NZ’s emissions by 50 percent over the next 27 years.

The discrepancy was spotted by Kennedy Graham, Green spokesperson for climate change, who blogged about it twice (one, two) last week, and asked questions in Parliament. Graham described the mismatch as an “obscene policy failure” and “policy incoherence of [a] breath-taking dimension”.

As you might expect, NZ’s news media were all over the story, keen to get the government to explain what was going on. As you might expect in your dreams. The only news outlet that I can find who covered the story in depth is Reuters/Point Carbon (via Climate Spectator):

Domestic emissions permits in the New Zealand ETS currently trade at NZ$3.75 ($3.15), but companies are also allowed to comply by buying U.N.-backed carbon credits, which are available for only 30 cents each.

The New Zealand government last year removed legislation that would have forced big companies to pay for a bigger share of their emissions and restrict access to international credits – both moves that would have driven up carbon prices.

It also put on hold indefinitely including in the scheme emissions from agriculture, which accounts for nearly 50 per cent of New Zealand’s emissions.

Under questioning from Graham in Parliament, Simon Bridges, the associate minister for climate change, said that the emissions trading scheme was “a long term tool” and that price rises would follow when there was a new global agreement and “leadership from the major economies.”

The current low price for carbon in the ETS is what’s causing the long-term emissions blowout, because it provides no incentives for forestry planting (or disincentives to harvest). Emissions rise out to 2025 as forests planted in the 1990s are harvested, but the subsequent levelling off is entirely due to an heroic leap of faith by the MfE modellers:

After 2030, we project that net emissions will fall as harvesting activity decreases and the greenhouse gas removals from forests planted since 2012 rises.

In other words, the men from the ministry assume that by some magic, forest owners are suddenly going to start planting large forests that will enable us to cap our emissions 50 percent above today’s levels. If that a planting doesn’t happen very soon, NZ’s net emissions could easily balloon way over 100 mt per annum from 2025 onwards.

Bridges is right in one respect: the ETS is a long term tool — but only if you use it properly. As the Reuters report indicates, by keeping prices artificially low they keep the policy levers set in neutral, and the nation commits itself to business as usual instead of preparing of a carbon-constrained future in a cost-efficient manner.

All this policy incoherence comes in the wake of the release of the first part of the IPCC’s fifth report, which for the first time spells out a carbon budget for the planet. To have a reasonable chance of staying under a 2ºC temperature rise, we can afford to emit a total of about 1,000 gigatonnes of carbon in total. Over the last 150 years we’ve emitted half of that amount. At the rate we’re adding carbon to the atmosphere at the moment, the second half of our carbon allowance will be gone in a matter of a couple of decades. The longer we leave taking action, the steeper — and therefore the more expensive and difficult — the cuts will have to be, or we’ll blow past two degrees and be on course for three or four degrees and certain disaster. 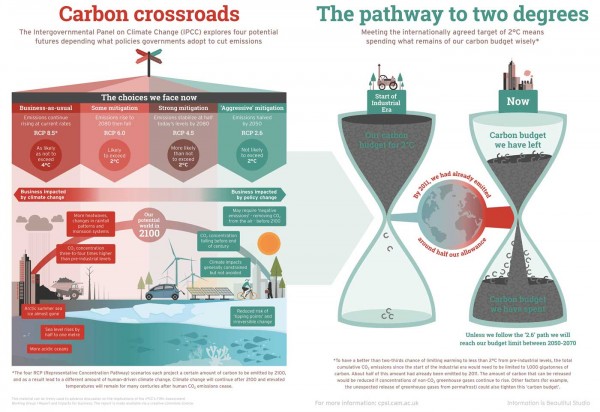 If New Zealand is going to do its fair share, and for the least cost, then instead of waiting for someone else to take the lead and force the game, we should be taking action now. To anyone who follows the science and understands the real risks that we’re facing, this much is common sense. What a shame that something so basic is so lacking on the government benches.