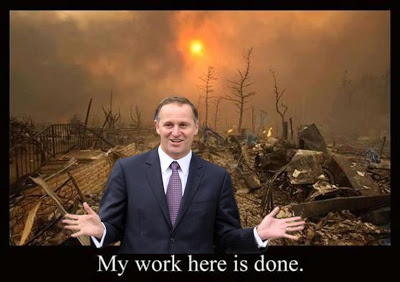 Opinion polls are starting to show that the National led government is heading for its sunset year. Water under the bridge and all that, but I can’t see this trend reversing unless the Labour Party stuffs up mightily.

Not that this is slowing or stopping National’s agenda to flog off as much of our assets to private, mostly overseas interests, before they lose office. Education is no exception to this. The list of valuable resources that have been moved to private hands since the advent of the so-called ‘Tomorrow’s Schools’ ideology in 1989 is extensive, equalled by the reduction in services to schools.

The latest on the list is Learning Media, an SOE that was established as part of the ‘Tomorrow’s Schools’ shakeup in 1989 to take over the publishing of education resources formerly carried out by the Department of Education. The most significant of these was the School Journal, that you will all remember from your school days.

The government has painted the failure of Learning Media as being due to its inability to turn a profit. However this spin obscures the fact that Learning Media’s demise was caused by the government (through the Ministry of Education) taking much of the publishing business to the private sector.

As with virtually everything else promoted by this unimaginative government, National’s education policies have been imported from overseas, albeit with slight modifications. Let’s look overseas.

Some of the vociferous proponents of school reform are well known educational experts such as Bill Gates, Rupert Murdoch and News Corp, McGraw Hill, Scholastic, and Pearson Group, amongst others. Being an intelligent reader, I’m sure you will have noticed that these experts are commercial publishing entities. The reason for this is not rocket science – these multinational corporations are seeking to take over the education market to improve their profit streams. To achieve this, they need to destroy the present state run education systems in their target countries; hence the use of the ‘schools are failing/teachers are no good’ rhetoric by their tame right wing politicians.

One of the key players on the world education reform stage is former Blair minion Sir Michael Barber, currently the chief education strategist for Pearson Group. Prior to this, however, he was the head of McKinsey & Company’s global education team, responsible for producing the reports (“How the world’s most improved school systems keep getting better” and ‘How the world’s best-performing schools come out on top’ ) that became the handbooks for the National led government’s education policy in 2009.

(Note that the definition of best performing schools is based on one measure only- the Programme for International School Assessment (PISA) tests operated by the OECD. Valid conclusions? Of course not.)

Sir Michael Barber, then, sits in a pivotal role in Pearson Groups’ moves to commercialise education:

“Finding business models for affordable schools and other educational solutions in developing areas of the world, to help meet United Nations goals of universal primary education and to raise achievement.”

How is this best achieved? ‘Deliverology’  – a term coined by Sir Michael Barber. You may not know the word, but the process will surely be familiar to you.

‘“Deliverology” is a means to systematically demoralize and humiliate people in lieu of not being able to convince them to pursue a course of action. It is based on the fundamentally flawed idea that an organization or institution can be improved by “incentivizing” people to meet “targets” or what Achieve, Inc., insists educators obsess over: “benchmarks”. It is an autocratic, command-and-control management system that redefines public institutions (such as public schools) as factories, and displays an almost single-minded fixation on cost reduction. Deliverology is a means for transforming the goal of public institutions from meeting public needs to meeting arbitrary “production” “benchmarks” established by the autocrat under the hoax of saving taxpayer’s money.’ (Mark Garrison)

While this article has an education focus, you will of course have noted that ‘deliverology’ has been, and is being, used by National led governments over the past couple of decades to justify reform and privatisation of a wide range of public services. Garrison again:

‘Thus, deliverology appears to be a means for imposing behavior modification techniques that are ultimately aimed at yielding a change in beliefs; irreversible change here seems to be at least in part about people learning to accept product status, that is, as having no rights. Indeed, broad cultural and political shifts are required if that is how social life is to be organized.’

Returning to the New Zealand situation: It is clear that a variant of ‘deliverology’ has been used to justify National’s education policy and actions, including the failure of Learning Media. This organisation had been a flourishing publisher of educational resources, including the ‘Ready to Read’ series of junior reading books that many of you will also have used in your early primary school years.

Why has the government kneecapped Learning Media?

Conspiracy theory time…. the elimination of Learning Media opens the door for private enterprises to take over the provision of all education resources to New Zealand schools, including outfits such as Scholastic, McGraw Hill, News Corp and Pearson Group…… get the drift?

Note : Mark Garrison is currently Professor of Education Policy & Research in the Educational Leadership Doctoral Program at D’Youville College, Buffalo, New York.  For a much more detailed article on Sir Michael Barber and ‘deliverology’ read this:

Big Data, the Common Core, and the Global Governance of Education, Part 1: Who is Sir Michael Barber?