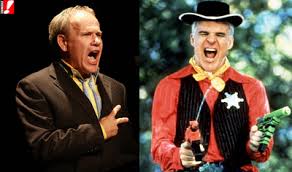 So, it is Monday morning 20 October 2013 and Len Brown is presumably at his office as the Mayor-elect, waiting to be sworn in. Having won an election in which the right had acquiesced to his adoption of
inflation-indexed rates along with other fundamentals of their own platform and in which the left had simply inherited him on their ticket (Penny Hulse not wanting to front when she has a better say as
Deputy) he was assured to win. Aucklanders had shied at any discontinuity in an epic and unique transition, and yet he couldn’t pull a majority – he got less than half – and a loud-mouth Yank pulled
over 100,000.

Minto was north of 10k. Penny Bright was more than that and top of the list more again – a protest vote 30k+, about 10% (mainly from the left) which robbed Len of a ringing mandate. More remarkable given
the low turn-out and the ultimate protest – total voter abstinence. No evil John Banks to defeat this time. No motivation. Only Len. And all Len can muster from pashing up the Tory government and bashing
up the port workers is a lukewarm endorsement at the end of a long-telegraphed cakewalk. Deemed necessary, convenient and clung to in fear of the worse option, but not loved. Nor, if we are to believe
even half the allegations that have crawled out of the Slaterverse, is Len to be respected.

His limp politically and ideologically negotiated victory had not even been sealed when Len went and, quite literally, fucked it. The mayoralty of Auckland and the epitomic, defining act of its First
Citizen, is an image of a balding middle-aged white man, sexually exploiting a young Asian underling in an official room named after the tribe on whose land the city was founded and on a table upon which a
Maori would never even sit on out of basic respect. How more appropriately inappropriate for how Auckland operates and intends to be operated.

When sprung Len goes on Campbell Live within hours. Immediate damage control in which Campbell reels out the patsies and Len puts on the hound dog sads where there should have been tears. He refuses to
discuss anything, would rather go on about political plots, offers no real apology to anyone for anything and wants to get back to work. Campbell offers more space and understanding head nodding and
supportive murmmerings to coax Len into some sort of contrition or admission. Nothing. He gave nothing, he remained without any awareness, without denying a single point. Nothing. Nixon gave more to Frost. Then again Frost demanded it and Frost never voted for Len like his mate Cambo must have.

It has turned out to be something of an exclusive because Len hasn’t been seen since (stage-managed coffee shop moments excluded). No, that one TV interview was enough to say he doesn’t get it. He doesn’t get
that he abused his office. He acknowledged causing harm and shame to his wife and kids, but not really anything beyond that ‘it is such a pity that my political enemies have upset my family’ – like somehow
this was someone else’s doing or that it has happened to someone else. Classic arrogance: refusal to curb selfish behaviour. Pride is a classic weakness and always a classic ending, alas for Len.

As for Campbell’s interview: We are left to think the two men are telling people, by omission, that she’s just this chick that he rooted at the office and she’s been dumped now so that’s that – end of. Smooth it all over with the missus and back to work Monday. That conversation sounds absurd now. As absurd as having Tony Veitch come on as he did that first night as if it was business as usual and pretending we don’t know he put his missus in hospital.

If that is how the patriarchy works then the sisterhood is more dysfunctional. Cr Penny Webster was dismissing all of it and begging like a dog for ‘what Len will give me’. That’s what they all say, he
he. (Well get use to that mockery, it isn’t stopping till Lenski is outski, and then some.) Poor Penny Hulse unable to do anything but back Len because she doesn’t want the fatal dose of one-termitis that is the Auckland Mayoralty inflicted on her. Len is a dummy alright, he is her human shield and she’s propping him up. Where are the women of the left on this? Are they too, willing to put up with a Mayor who treats the Town Hall like it was run by the Chow Bros.? Who will green light the predation of his staff to continue like it wasn’t even an issue? Cr Webster, Hulse… Anyone else want to let the boys grab
somin’ like it ain’t nu’in. Yea-a girl that’s what I’m talkin’ about right there. Right in the Ngati Whatua room, baby! They are cool with that apparently, down with it. If he wants to make a move on any of his staff that’s ok s’pose, eh. With his mistress filling in for the actual wife here and there… That’s not getting weird, is it? It’s a French farce without the class. It is untenable. It becomes
embarassing and eventually the Mayor of Tokyo or San Fransisco or wherever is left wondering what sort of a person our Mayor is. Next thing you know ratepayers and electors will be asking the same questions.

Now we know that Campbell appearance was a oncer his mate should have channelled some rage, preferrably feminist, and let him have it. Did you pay off the security guard, why wasn’t something that would have
got him fired reported? Giving it the old John Collinge in the Ngati Whatua room is not ‘a
daggy Dad moment’, Mr Brown. It isn’t helping out an aspiring young professional it’s called keeping a mistress, Mr Brown, one running on your Mayoral goodwill with others.

It has all the scripting of the antics of Jacques Chirac as Mayor of Paris but with a budget of less than $200. Getting comped at the big hotels and all the cheapscate stuff, it is so pathetic.

Len is saying, just for those who don’t get it: ‘Hey, I’m trying to save my good Christian marriage after I predated on the Asian advisor and helped myself whenever and wherever I felt like it around the Town
Hall for basically my entire term of office. And then like the last one I’ll end up having to get her a job on the council using my weight as the boss and let’s hope it doesn’t get all fucked up going into the elections and you are running for Conservatives and Reactionaries.’ That is what Len is putting out there as the standard.

It would be hard to devise a lower one. It is a standard and a Mayor not worth having.